Russia is entering a period of decline in first marriages. The 1990s generation now reaching marrying age is not numerous; and in addition, people now tend to marry at a later age. However, the upcoming decline in marriages is nothing new—Russia experienced a similar situation both thirty and fifty years ago, according to Sergei Zakharov, Deputy Director of the HSE's Institute of Demography.

Official marriage remains important in Russia, as most Russians value the traditional family (see here). Cohabitation, which serves as an alternative to formal marriage in many Western countries, is perceived in Russia as a precursor rather than substitute to marriage (see Cohabitation Precedes Rather than Replaces Marriage). However, matrimonial and reproductive patterns change over time (see Young People Seek Self-fulfillment; Childlessness Increasingly Determined by Attitudes; Out of Wedlock Does Not Mean Fatherless) in response to new socio-economic realities, such as women becoming better educated, economically independent and seeking self-fulfillment outside home, and young people taking longer to mature and choose a career, amongst other factors. As a result, many people, particularly in cities, postpone marriage till later in life.

Although associated with new attitudes and lifestyles, the observed decline in new marriages is caused primarily by demographic factors, such as a drop in birth rates in the 1990s in Russia.

A decline in marriages following a demographic decline is nothing new; similar trends have been observed in Russia more than once over the past half-century, Zakharov notes in his paper ‘Marriage and Divorce in Russia’ published in the HSE's Demoscope Weekly. Thus, the current decline in marriages is just a new wave of an already established phenomenon.

Marriages Go with the Demographic Flow

Some fifty years ago, Russia saw a major drop in the number of marriages. According to Zakharov, the reason was that the young Russians who married in the early 1960s belonged to the generation born during the Second World War. The absolute number of registered unions went down, while the total marriage rate, i.e. the number of marriages per 1,000 people per year, fell from a peak of 12 during the 1950s to mere nine by 1965.

A steep rise in marriage rates during the first postwar decade was driven by a number of factors, including marriages of the prewar generations, marriages previously deferred due to the war, and also a drive to legitimise informal unions in order to access government handouts (the government's earlier liberal attitude towards 'civil marriages' had ended by 1944).

Following a decline in the 1960s, both the number of new marriages and the overall marriage rates rebounded in the 1970s, driven by the post-war baby boomers, although this did gradually decline once again between the late 1970s and mid-1990s, particularly between 1989 and 1995, reaching the record low overall marriage rate of 5.8 per 1,000 population in 1998.

Remarriages have contributed to higher marriage incidence. Usually, first-time marriages have prevailed over remarriages, but in certain years remarriages surged, reaching a historic peak in 2011, when remarriages accounted for 30% of all registered unions for men and 29.4% for women, with similar rates recorded in 2012 and 2013. Thus, according to Zakharov, remarriages today compensate more fully than in the 1970s and 1980s for marriages which have ended in divorce or the death of a spouse.

In 2012, the number of first and subsequent marriages dropped significantly by 7.8% compared to 2011, then recovered slightly by 0,98% in 2013, even though it is unclear whether some brides and grooms had been married before.

So far, Rosstat's data show a decline in the annual number of marriages by at least 1.5% compared to 2013. Most likely, Russia is now entering a new long-term decline in the number of marriages – mainly affecting first-time unions – caused by demographic factors, according to Zakharov. He notes that the 1980s 'baby boom' still accounts for the high number of Russians aged 35 and younger, but the country will soon face what Zakharov describes as 'a negative dynamic of the young adult population'.

The observed drop in the number of potential marriage partners started with the age group of today's 15 to 19 year-olds. Compared to 2002 – the end of a consistent increase in the number of young adults – the overall decline in the 15 to 19 age group reached 5.6 million by 2013.

Since 2009, the decline has also affected the 20 to 24 age group --the main contributor to the annual number of marriages in Russia; between 2009 to 2013, the number of Russians in this group dropped by 2 million. 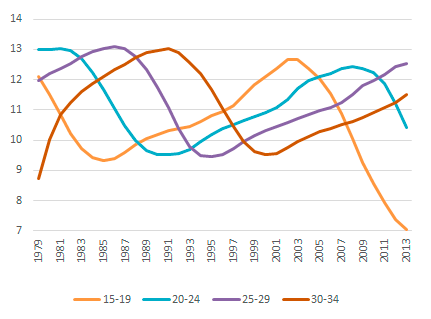 The number of men and women aged 25 to 35 is still on the rise, which contributes to the marriage statistics. In 2013, the most common age of marriage in Russia was 25 for men and 24 for women. In the coming years, however, the number of Russians over 25 will decrease, resulting in a decline in marriage and birth rates, according to Zakharov.

Normally, men marry at a slightly later age then women. Based on the above, we can assume that women will enjoy a wider choice of potential marriage partners than men.

Russia experienced a similar situation some thirty years ago. "Today's brides and grooms were born to the relatively few couples who married in the late 1970s to early 1980s, Zakharov explains. "Almost inevitably, they will reproduce similar proportions by age and sex as a new generation of adults after 25 to 30 years".

In the coming years, the choice in Russia’s 'marriage market' is thus expected to widen for brides and shrink for grooms.