Russians would like their children to value achievement and wealth more than they themselves do. This stems from the reality and norms of modern life, Maxim Rudnev and Alexandra Savelkayeva from HSE’s Laboratory for Comparative Studies of Mass Consciousness noted in a study on intergenerational value transmission.

Intergenerational value change is one of the main mechanisms that alter society's values, and as an economy develops, there is a gradual shift from survival values to self-expression values. Post-materialist value shift is described in the theory of renowned sociologist Ronald Inglehart.

Maxim Rudnev and Alexandra Savelkayeva tried to examine the intergenerational value shift process at the micro-level by studying the views of high-school seniors, as well as their parents.

In the study, a survey was conducted on 96 triads – high school seniors aged 17-18 and their parents (two, and in some cases one). The authors selected high-school seniors as respondents because by the end of school, a teenager has already formed has his or her own set of values that will not change significantly in the future. But also, it is specifically at this age that parental influence on values is easily tracked. ‘Such an influence obviously has the tendency of weakening substantially after a teenager enters adulthood and college, which is often accompanied by a separation with family and a change of residence,’ the authors note.

The values of teenagers and their parents were measured using the methodology of Shalom Schwartz. 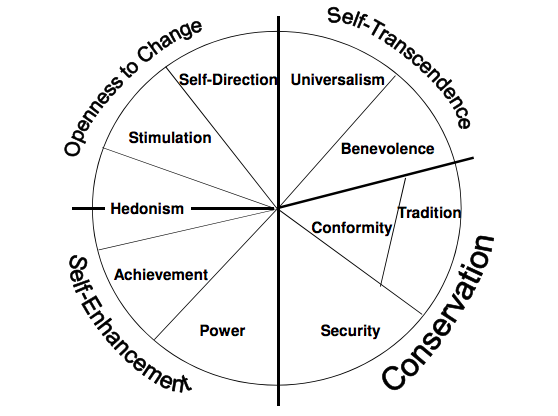 The results of the study show that one of the least important values for both parents is hedonism, while security is valued above everything else. This is true for both parents and teenagers.

One key conclusion is that parents’ personal values do not always correspond with the values that they would like to pass down to their children. This was the case for the value of achievement among mothers and self-direction among fathers. On average, mothers and fathers would like their children to express these values more than they themselves do.

The researchers discovered that teenagers whose parents attach great importance to the values of universalism and benevolence, and also aim to pass these traits on to their children, express these values more. The authors note that it is primarily mothers who pass down these values. At the same time, the importance of universalism and benevolence for parents is on average higher than the level of importance they would like to inspire in their own children.

Similarly, the values of power and achievement were notably lower for parents than they would prefer for their children. ‘Here it is not the violation of value transmission that is important, but conversely, the intended and successful way parents instil more individualistic and less humanistic values in their children,’ the authors comment. The reasons behind such dispositions in parents might lie in social norms and parents’ own view of societal realities.

‘Parents can consciously foster certain values in children, or decide against this, irrespective of how important parents themselves find these values personally. This might stem from an awareness of modern-day realities and living conditions, under which a person cannot achieve successful adaptation without the ability to achieve, earn, and be ambitious and authoritative. But it is not at all a requirement – or even necessary – to champion ideas of justice or help those around you,’ the researchers add.

Author: Marina Selina, January 28, 2015
All texts by
Sociology
Spotlight
Economics
Research
Chronic Poverty in Russia Has Decreased in the Past Two Decades