Life expectancy among Russians has been increasing over recent decades. However this is more recovery than growth – making up for previous declines. Mortality rates fell in the same areas that previously accounted for their growth in the late 20th, early 21st centuries – cardiovascular disease, and external causes of death: murder, suicide, alcohol poisoning and car accidents, according to senior academic researchers at the HSE’s Institute of Demography Evgeny Andreev, Ekaterina Kvasha, and Tatyana Kharkova.

Russia’s mortality rate has been declining every year since 2003. Life expectancy is growing, and is currently in the longest period of growth since 1965. However, this process should be viewed as compensatory – demographics have only just reached the point they were at when the Soviet Union collapsed. In 2012, for the first time since 1987, life expectancy for both sexes exceeded 70 years of age, and life expectancy for men at birth reaching this point only in 2013. However, Russia remains behind many developed countries in terms of life expectancy, and this gap is not closing, note Evgeny Andreev, Ekaterina Kvasha, and Tatyana Kharkova, in their article ‘Life Expectancy in Russia: Return to Growth’ for HSE’s Demoscope Weekly.

The article is based on results from the research project ‘New Trends in Russia’s Demographic Development, and their consideration in socio-economic forecasting’, carried out under the HSE’s Basic Research Programme in 2013. This research uses Rosstat, Eurostat and WHO data. 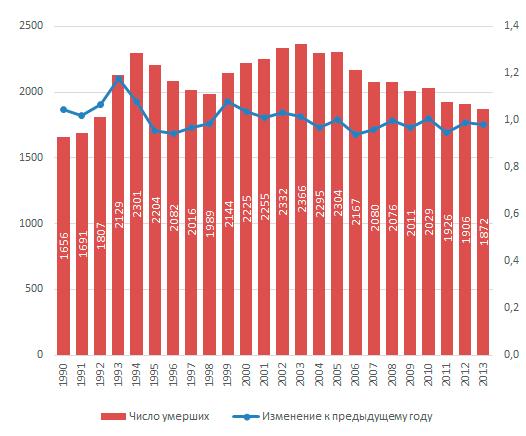 The article’s authors calculated the average number of deaths per day each month, starting from 1990, giving a detailed view that showed that the winding up of the anti-alcohol campaign (which had saved many lives) did a great deal to increase the mortality rate in those early post-Soviet years.

Lifting alcohol controls led to a rising number of deaths across the country – a trend that peaked in late 1994, early 1995. After that, rapid growth gave way to a slow reduction.

After 1998, the year of the default, a new rise in mortality rates is observed – lasting until April 2003. Then we see a reduction in the number of deaths (aside from an isolated spike in 2010, ascribed to the unusually hot weather, forest fires and smog).

Growth rates for life expectancy are different in rural and urban areas, the experts stress.

The smallest increase in life expectancy seen since 2003 is for rural women – rising 4.3 years, and the greatest – for urban men – by 6.7 years. Growth over the period 2003-2005 was slow, especially in villages, but increasing life expectancy did continue to gather pace.

However, it remains modest by comparison with other developed economies, the researchers noted. The gap with France on life expectancy is almost 13 years for men and 8.4 years for women. The gap with the United States is smaller: 11.3 years for men and 4.9 for women. No country comes off well when compared to the record-holder in this area – Japan: where men live 14.9 years longer and women 10.7 years longer than their Russian counterparts.

Researchers have studied the impact of the various different factors on mortality. Overall, from 2004 to 2013, mortality rates decreased due to the same causes that had previously contributed to its increase. Figure 2 demonstrates the gains made in life expectancy.

The picture is brighter for women: they are less likely to die of cardiovascular problems. In part this is a result of the ‘cardiovascular revolution’ – a successful fight against cardiovascular and circulatory disease resulting from ongoing blood-pressure monitoring and hypertension medication, under the Federal Targeted Programme of 2002 ‘Preventing and Treating Arterial Hypertension in Russia.’

As a result of these measures, women aged over 65 face a significantly reduced chance of dying from a stroke, improving life expectancy by 0.7 years.

At the same time, treatment for ischemic heart disease in that age group had a less significant impact on life expectancy, cutting it by just under 3-fold. This makes sense: treating this illness, especially in the elderly, is complex and expensive. According to the Ministry of Health, since 2003, the number of heart operations for ischemic heart disease grew over 8-fold, extending patients’ life expectancy.

The number of deaths by murder and suicide started to decrease following 2001, with a positive balance for men reached in 2010, and for women in 2008.

Deaths from accidental alcohol poisoning also show a positive dynamic, although this remains significantly more common in rural areas than in cities. The positive impact is less noticeable among men. People aged over 65 saw a 0.25 year reduction in the mortality rate from ischemic heart disease and strokes.

Alcohol-related and heart-related deaths may be linked

There are two possible explanations for this. First – a significant number of deaths from alcohol poisoning can be attributed to circulatory illnesses. Second, the northern approach to alcohol consumption – large volumes of strong liquor – can fuel the development of heart disease. The two are not mutually exclusive, the researchers say. An unexpected fluctuation in deaths from ischemic heart disease among people aged 45-64 is likely linked to changing alcohol consumption within Russia.

The decrease in mortality from situations and illnesses linked with dangerous alcohol consumption amounts to a 42% increase in life expectancy for men and a 27% increase for women. A reduction in alcohol as a cause of death could be linked with the fact that younger Russians prefer less strong drinks – such as beer. This lowers the risk of alcohol poisoning and cardiovascular illnesses.

A minimal input to rising life expectancy in Russia since the early 2000s can be seen in both sexes as a result of the falling rate of deaths due to external factors and circulatory illnesses.

Causes have different ‘weights’ for men and women

For men, life expectancy is chiefly linked with a decrease in the mortality rate due to external reasons by 3 years – as seen in city and village alike. Life expectancy increased by 2 years due to more effective treatments for circulatory disorders.

However, for women, the reduction in mortality as a result of cardiovascular illnesses had a maximum impact of an additional 2.5 years of life expectancy. External factors delivered about a 1 year increase.