The American Family Is Drifting Away from Marriage

The number of single people of all ages grows in the US. People are marrying later and less frequently. Family size is shrinking and the extramarital birth rate is growing according to the ‘Global Demographic Barometer’ of the Demoscope Weekly journal

The number of households has grown, and their size has shrunk 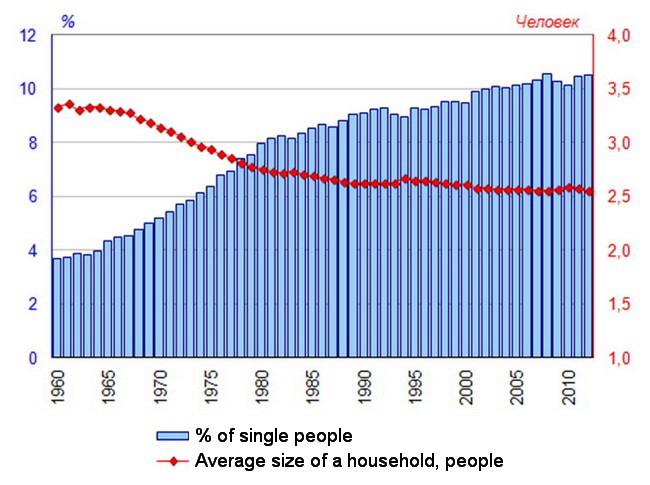 The number of marriageless families will only grow

Americans’ marital behaviour is changing considerably, says Demoscope Weekly. The share of family households decreased from 85% in 1960 to 66% in 2010, according to the 2010 U.S. Census.

During the last 30 years the share of family households has been decreasing. According to 2010 data, their share has fallen to 66.4%, including households with spouses whose share has fallen to 48.4%. This is explained by the fall in the number of two-parent families. At the same time, the number of single people and non-married couples, as well as single-parent families, has been growing.

In the next ten years, many children of the post-war baby boom in the U.S. will reach retirement age. This means that the share of households with spouses and children will be decreasing faster.

Among family households without a married couple, the majority are headed by a woman. In the early 1950s, the share of such families was about 8%. In 2012, it reached almost 13%.

The growing share of non-family households is due to the growing number of elderly people, mostly women, living solo. Independent living has spread with the development of pension and social aid systems.

Partnerships are trying to ‘compete’ with families

The number of non-family households has grown mostly due to the popularity of unregistered partnerships. Their share of households in 2010 was about 7% – seven times greater than in 1970. And this figure is somewhat lower due to the difficulty of calculating such households.

The number of unregistered partnerships with children is also growing. According to the 2010 U.S. census, seven million opposite-sex couples lived together without being married. And 40% of them had one or more children under 18. This is almost the same number as married couples.

Same-sex partnerships represent less than 1% of households having a couple. In 2010, there were 594 same-sex couples in the U.S., and every fifth one had at least one child under 18.

Fewer and fewer households with children

The share of families with children under 18 in the total number of family households is falling, Demoscope Weekly reports. In 1950, 52% of family households in the U.S. included children under 18. In 2012, this figure fell to 43.5%. This is happening due to the shrinking share of families consisting of a married couple with children – from 51.8% in 1960 to 29.4% in 2012. The share of single-parent families has grown to 14% in the last year (see Fig.2). 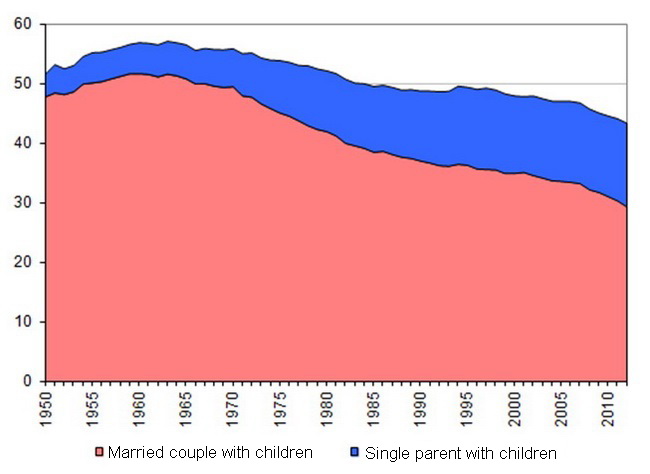 Source: U.S. Census Bureau, Current Population Survey, March, and Annual Social and Economic Supplements, 2012 and earlier. FM-1.  Families, by Presence of Own Children Under 18:  1950 to Present

Marriage ‘is getting older and losing ground’

Another sign of marriage (and reproductive) behaviour’s ‘mutation’ is the postponement of marriage. The ‘Aging’ of marriage or the refusal to marry, and a larger distribution of divorces and unregistered unions have considerably changed the marital structure of the population, the journal emphasizes. 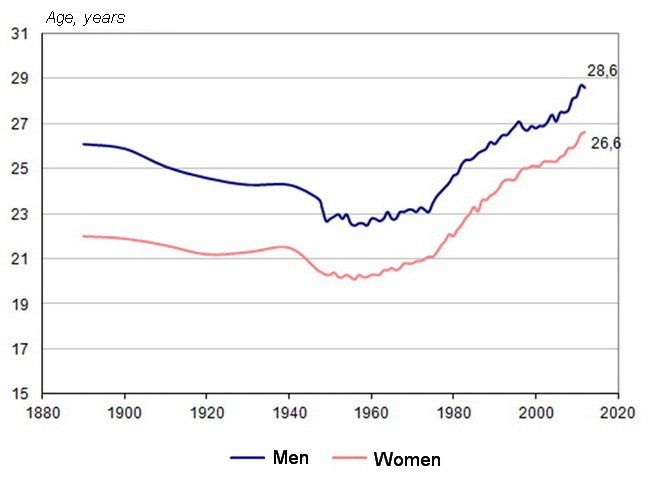 The birth rate is falling; the share of births outside marriage – 40%

As a result, the overall  birth rate index (the average number of births per woman of reproductive age, 15 to 49 years) has fallen to the level of simple reproduction (generation replacement) – 2.1, and, due to the economic recession, to 1.9 in the late 2000s.

Figure 4. Distribution of children by age and marital status of their mothers, and the proportion of births outside marriage, USA, 2011, % 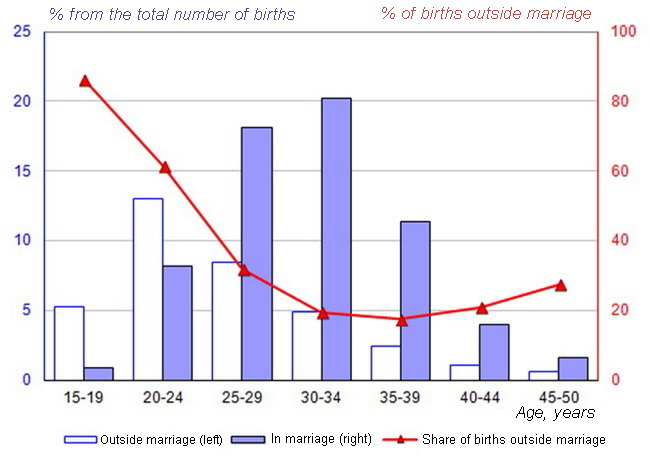 Births outside marriage are more popular among women with a lower education level. Among women having at least a bachelor’s degree who gave birth in 2011, only 8.8% were unmarried. And among those who have not finished school, 57%.

Births outside marriage are directly related to the level of household wealth, Demoscope Weekly reports. Among women who gave birth in 2011, the share of the unmarried was greatest in households with the lowest incomes (less than $10,000 a year) – 69%, and smallest  – 9% – in households with an annual income of $200,000 and higher.

Author: Olga Sobolevskaya, May 31, 2013
All texts by
Demography
Spotlight
Sociology
Interview
'We construct a portrait of Russian society'