One in ten Russian researchers who publish prolifically are working simultaneously in more than one country. According to HSE researchers, they are usually attracted to countries such as the U.S., Germany, France and the U.K.
STUDY'S AUTHORS:
Natalia Shmatko, Head, Department for Human Capital Research, HSE Institute for Statistical Studies and Economics of Knowledge (ISSEK)
Yurij Katchanov, Chief Research Fellow, Department for Human Capital, HSE ISSEK

The academic mobility of Russian scientists has been found to be somewhat higher than that of their western peers, with up to 10% of prolifically publishing Russian researchers simultaneously holding positions with research centres in other countries as well as in Russia. For comparison, according to international research, the proportion of academic staff working simultaneously in more than one country stands at 8% in Germany and Austria, 7% in the U.K., and 6% in France.

In their paper Synchronous international scientific mobility in the space of affiliations: Evidence from Russia, Shmatko, Kachanov, and Yulia Markova, Fellow of the American Association for the Advancement of Science, examine this phenomenon using a method based on identifying a researcher's main affiliation usually indicated in their published papers.

The research was conducted as part of the survey "Monitoring of the Labour Market for Highly Qualified R&D Personnel."

Between East and West

The authors also studied the socioeconomic indicators for 56 countries in which Russian scientists are likely to hold academic positions.

Based on their analysis of SISM, the authors describe Russia’s position in global science as being between East and West, i.e. between developed and developing countries. In terms of country preferences, Russian researchers with international affiliations tend towards the G7 countries and Switzerland (57.8% of all affiliations), and far less so towards Japan, China, South Korea, Brazil and India (9.3%). Mobile Russian authors whose papers receive high numbers of citations are more likely to be affiliated with advanced foreign institutions compared to their mobile colleagues with fewer citations.

By mapping mobile Russian scientists' international affiliations, one can see a stronger attraction to the West compared to the East.

Graph 1.The likelihood of finding a Russian author's international affiliation by country 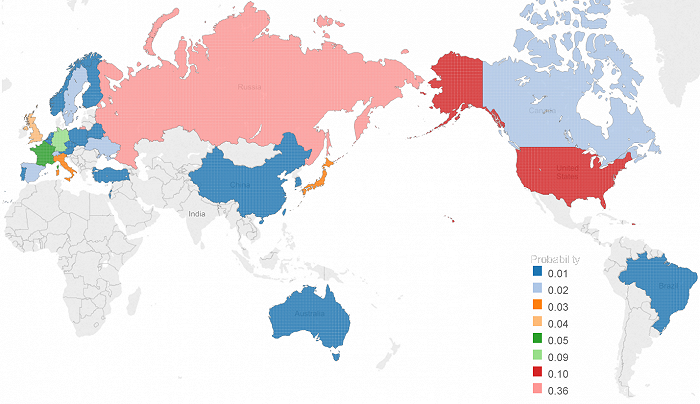 Scientific mobility is a consequence of the international division of labour, which can take the forms of temporary, part-time or remote employment. The more affiliations, the harder it is to determine a researcher's institutional and national identity.

"A mobile scientist today is almost like a quantum object: de jure, they can simultaneously hold positions with two or more institutions located in different countries," the researchers note.

A situation where researchers are not attached to a particular location has led to the virtualisation, as well as the globalisation, of science.