There are opposing viewpoints on the scientific institutions functioning. From the one hand, many scientists claim that the big institutions epoch passed: the science development proceeds on micro level, and revolutionary findings in science are made by small laboratories. From the other hand, there is the belief among the managers who makes decisions about research institutions policy that scientific progress is determined by huge structural changes that are impossible without important infrastructural development and big institutional forms creation.

Sociologists from Institute for Statistical Studies and Economics of Knowledge NRU HSE Yuriy Kachanov and Natalia Shmatko and researcher from USA Yulia Markova tried to answer to this question on the basis of RAS physics institutions data. The authors estimated scientific capital of 39 institutions by using sociological data of the survey “The monitoring of the labor market for highly qualified R&D personnel” that was conducted by NRU HSE. Bibliometric information of Web of Science Core Collection (Thomson Reuters) allowed to define information contribution of Russian institutions into global physical science.

The main research result is scientometric space of physics institutions (see the fig.1). This space is considered in statistics as data analysis method and as data presentation method at the same time. The structure of this space is determined by two dimensions. The first dimension is interpreted by authors as information significance of Russian institutions on the world scene. The second dimension that forms institutional space of Russian physics is social recognition of scientific authority of institution.

«The main research finding is not unexpected, however it contradicts to intuition of some critiсs of Russian scientific politics, – said Natalia Shmatko, the head of Department for Human Capital Research Institute for Statistical Studies and Economics of Knowledge NRU HSE. – On the basis of statistics methods we proved that big institutions had high authority on the global science scene and produced more scientific information that highly evaluated by global physics community». In other words, the size is significant for scientific organizations. Scientists from small Russian institutions have more difficulties in receiving scientific recognition, in withstanding the severe ideas and experiments competition in the global physics. 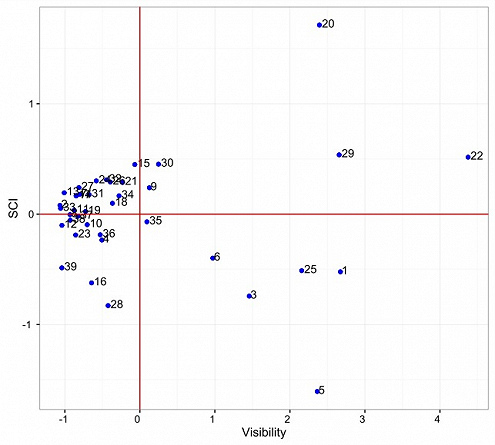