How Spatial Navigation Correlates with Language

Cognitive neuroscientists from the Higher School of Economics and Aarhus University experimentally demonstrate how spatial navigation impacts language comprehension. The results of the study have been published in NeuroImage.

Nikola Vukovic and Yury Shtyrov carried out an experiment at the HSE Centre for Cognition & Decision Making, which explains the relations between the systems responsible for spatial navigation and language. Using neurophysiological data, they describe brain mechanisms that support navigation systems use in both spatial and linguistic tasks.

“When we read or hear stories about characters, we have to represent the inherently different perspectives people have on objects and events, and ‘put ourselves in their shoes’. Our study is the first to show that our brain mentally simulates sentence perspective by using non-linguistic areas typically in charge of visuo-spatial thought” says Dr. Nikola Vukovic, the scientist who was chiefly responsible for devising and running the experiment.

Previous studies have shown that humans have certain spatial preferences that are based either on one’s body (egocentric) or are independent from it (allocentric). Although not absolute and subject to change in various situations, these preferences define how an individual perceives the surrounding space and how they plan and understand navigation in this space. 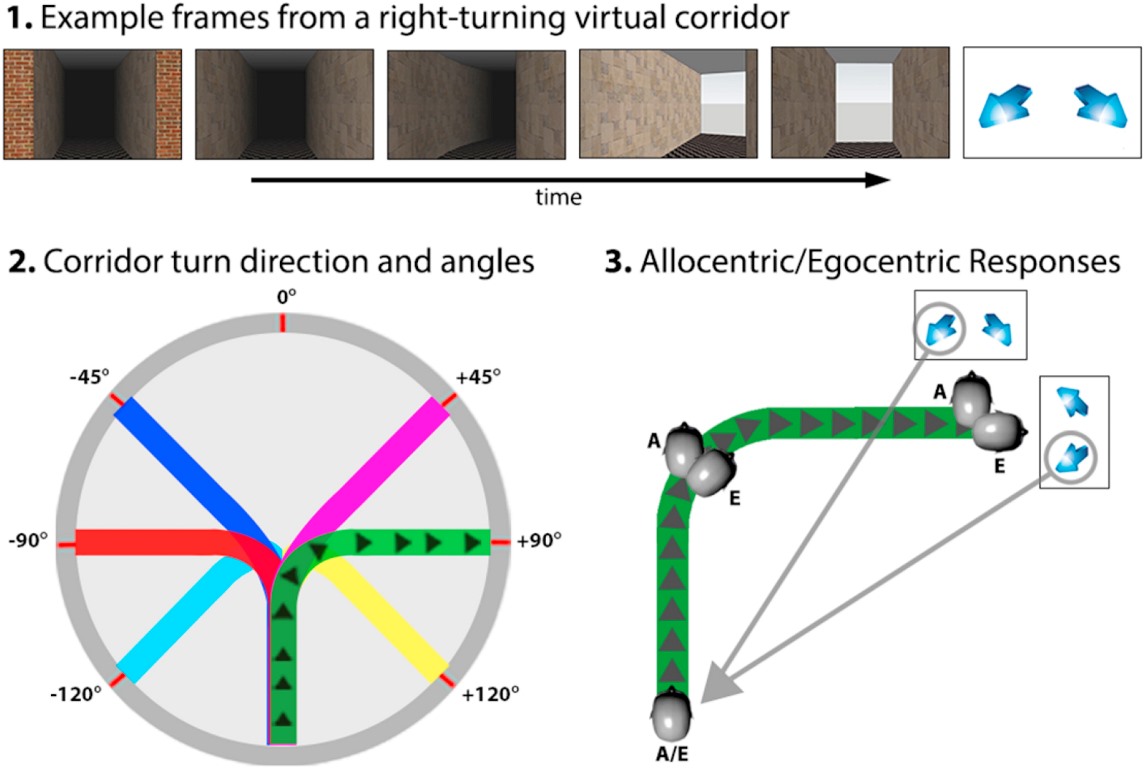 Virtual corridor navigation task. Illustrated on the top (1) are example frames from a right-turning corridor animation. At the end of each corridor, navigators were presented with a screen showing different arrows, and had to choose which one they thought pointed to the beginning of the corridor. (2) is a schematic of the possible corridor turns, including the eccentricity of the turn relative to the heading defined by the initial segment (−120°, −90°, −45°, 45°, 90°, 120°). The top-view head representations in (3) illustrate cognitive headings based on Allocentric (A) and Egocentric (E) frames during a right-turning (90°) corridor. Note that using an egocentric strategy will lead participants to perceive the corridor start behind them and to the right, so they would choose the right pointing arrow. Conversely, using an allocentric frame a participant would choose the left arrow in the same scenario, because their cognitive heading remains the same throughout the trial, and matches the heading of the initial corridor segment

The participants of the experiment solved two types of tasks. The first was a computer-based spatial navigation task involving movement through a twisting virtual tunnel, at the end of which they had to indicate the beginning of the tunnel. The shape of the tunnel was designed so that people with egocentric and allocentric perspectives estimated the starting point differently. This difference in their subjective estimates helped the researchers split the participants according to their reference frame predispositions.

The second task involved understanding simple sentences and matching them with pictures. The pictures differed in terms of their perspective, and the same story could be described using first (“I”) or second person pronouns (“You”). The participants had to choose which pictures best matched the situation described by the sentence.

During the experiment, electrical brain activity was recorded in all participants with the use of continuous electroencephalographic (EEG) data. Spectral perturbations registered by EEG demonstrated that a lot of areas responsible for navigation were active during the completion of both types of tasks. One of the most interesting facts for the researchers was that activation of areas when hearing the sentences also depended on the type of individual’s spatial preferences.

‘Brain activity when solving a language task is related to a individuals’ egocentric or allocentric perspective, as well as their brain activity in the navigation task. The correlation between navigation and linguistic activities proves that these phenomena are truly connected’, emphasized Yury Shtyrov, leading research fellow at the HSE Centre for Cognition & Decision Making and professor at Aarhus University, where he directs MEG/EEG research. ‘Furthermore, in the process of language comprehension we saw activation in well-known brain navigation systems, which were previously believed to make no contribution to speech comprehension’.

These data may one day be used by neurobiologists and health professionals. For example, in some types of aphasia, comprehension of motion-related words suffers, and knowledge on the correlation between the navigation and language systems in the brain could help in the search for mechanisms to restore these links.

Yury Shtyrov, Leading Research Fellow, Centre for Cognition & Decision Making
Nikola Vukovic, Aarhus University
November 09, 2017
Psychology neurobiology
Health Studies
Article
Brain in Space
What Happens to the Human Nervous System in Weightlessness
Psychology
How Neurotechnologies Impact Risk Appetite
Education
What Else Can Fingers Tell Us?
Health Studies
Can Nicotine Help to Treat Schizophrenia?
Several studies have indicated that schizophrenic patients are likely to show high levels of nicotine dependence. Scientists from Higher School of Economics (HSE), Institut Pasteur, the CNRS, Inserm and the ENS employed a mouse model to elucidate how nicotine influences cells in the prefrontal cortex. They visualized how nicotine has a direct impact on the restoration of normal activity in nerve cells (neurons) involved in psychiatric disorders such as schizophrenia. These findings were published in a paper that appeared in the journal Nature Medicine.
Health Studies
Alcoholism May Be Caused by Dynamical Dopamine Imbalance
Researchers from the Higher School of Economics, Ecole Normale Supérieure, Paris, Indiana University and the Russian Academy of Sciences Nizhny Novgorod Institute of Applied Physics have identified potential alcoholism mechanisms, associated with altered dopaminergic neuron response to complex dynamics of prefrontal cortex neurones affecting dopamine release.
Spotlight
Interview
Cognitive science
Neuroscience
Stimulating Brains in Basements