Not Getting Lost in Space

The big scanning antenna at the Pushchino Radio Astronomy Observatory logs almost 90 GB of data every day. The data are usually processed by the astronomers manually. Vladimir Samodurov and Alexander Gorbunov, researchers at the HSE Faculty of Business and Management, decided to relieve the scholars from this hard work and give this job to neural networks. They shared the results of their work in the paper ‘Perspectives of intellectual processing of large volumes of astronomical data using neural networks’.

Pulsars are fast-rotating neutron stars that form as a result of an explosion of supernovas. Pulsars have a very strong magnetic field angled to the rotation axis. These space objects emit radiation impulses along the magnetic axis. When these impulses were discovered, there was a theory that they were artificial, and the first pulsar was even nicknamed ‘LGM-1’ (Little Green Men). Pulsars are the size of a small town, but their mass is greater than that of the sun. From Earth, they are seen as constantly blinking stars thanks to their rotation. That’s why they are a kind of space beacon.

‘Interesting things happen after a supernova explodes. Some stars emit a certain amount of matter from their outer shell, while the stars start quickly rotating, like figure skaters. A figure skater stretches the arms out and moves slowly, and then grips the arms and speeds up. This is called the law of conservation of angular momentum’, Vladimir Samodurov explained, ‘And the supernova starts rotating fast, like a figure skater, while it still has a certain amount of energy, which starts flying out at the axis of the magnetic field. The star moves, and its rotation axis doesn’t correspond with the magnetic axis. It is something similar to a spinning top, which runs across the skies with its magnet poles, emitting charged particles. In fact, what we get is a very powerful radio beacon’.

If a pulsar’s radiation appears ‘not far from the Earth’, scholars log this event. The distance is calculated as follows: when the light travels in a dense matter, it decreases its speed, and the wave length decreases. This is very similar to the classic experiment in which we take a prism, it refracts light into a rainbow, and the refraction index depends on the light wave length. Each of its spectral parts refracts differently, and declines at a different angle from the initial path. The spectral components with a smaller wave length refract more, and components with a bigger wave length refract less. The same works for the radio range. The signal comes at higher frequencies earlier, and later at lower frequencies.

‘A radio source sparks for a split second somewhere in the skies: we log its peak, and if the signal comes once in several seconds, it’s likely a pulsar’, said Vladimir Samodurov. ‘We discovered such objects among the data from our radio telescope. First, a signal comes at a higher frequency, then at a lower, and then at an even lower one: it’s like we play a musical scale, do-re-mi-fa-so-la-ti, on the piano, but in reverse order. The only thing left is to manually look through 80,000 images and try to find the ones where such a signal demonstrates a scale with delaying lower frequency. 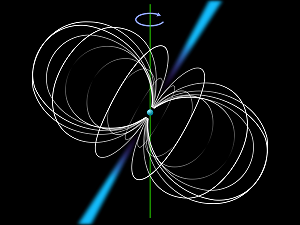 Scheme of a pulsar. The sphere in the centre is a neutron star; curved lines are the lines of the pulsar’s magnetic field, and the blue cones are the pulsar radiation

As experience shows, manual processing of large volumes of astronomical data collected during a year takes six months. To optimize this process, Alexander Gorbunov suggests using the opportunities presented by neural networks. The project used data from 24h observations at BSA LPI (Big Scanning Antenna at the Pushchino Radio Astronomy Observatory) from 2012 to 2013. Since this information has already been processed by experts, it was possible to check how the neural network would perform this task.

Detection of various classes of impulse events was carried out with the use of two types of neural networks: a multilayer perceptron and a self-organizing Kohonen network. Network processing helps divide the registered impulse events into four big clusters. As a result, when we compared the results of manual work and that of neural networks, we found that the latter way speeds up the process of new data classification considerably.

‘An expert analysis of the work performed by the Kohonen neural network demonstrated that impulses with a well-defined space character fall into one of the clusters. The other two include hardware failures data and impulses of technogenic character of various kinds, while the last cluster includes impulses having the character of single flickering radio sources’, said Alexander Gorbunov. ‘This way, an expert can see real-time results of space data processing, and track the most important phenomena, such as those related to impulses that are specific for pulsars’.

The use of neural networks for astronomical data processing will not only facilitate astronomers’ work. In the future, this system may become part of a ‘space GPS’, i.e., navigation by pulsars. The standard method of navigation in interplanetary space today is combined use of radio data received at tracking stations on Earth, and optical data from the on-board camera during encounters with Solar System objects. But this method is far from perfect. Even if one uses an atomic clock in space, it’s difficult to achieve good precision. The errors within the Solar System may be up to 100 km, and up to 500 km near Pluto. Pulsars can help reach better precision. There are calculations that say that ‘space beacons’ allow determining an object’s position with an error of 5 km. So, pulsars offer the most reliable standard of time known today.

‘We look for these fast-rotating pulsars in the radio range, and they move with incredible precision’, Vladimir Samodurov explained. ‘Imagine the sun having been compressed to a 10 km-ball, and making it spin at a pace of several rotations a second. Since the mass is huge, the pulsar is very stable, during hundreds, thousands, millions of years. It slows down gradually, but it does so in a predictable way. And if we look at 100 such spinners in various directions, we can build a very precise time scale, the most precise ever.’

This is still a long-term perspective, since the signal from pulsars is rather weak, and we need to learn how to distinguish it from foreign information. The system for astronomical data processing can be used to detect other objects in various spectral ranges, such as asteroids.

‘20 years ago, about 2,000 asteroids were known. Today, there are 600,000 – 700,000 of them, starting from several hundred meters in diameter. Yes, we are speaking about hundreds of meters, since we have to learn to catch everything, so to speak, like the Chelyabinsk meteor, which had the size of 15 m. When we learn to catch them, we’ll be safe’, Samodurov says.

As a result of this work, the scholars decided that they would use both neural networks – the one taught on expert knowledge and the Kohonen one.

‘To develop the impulse phenomena monitoring system, we need to discover some new regularities, which appear in our observations, in order to perform a more precise filtration of data. Currently, we are formalizing the knowledge used by experts in classification. This knowledge will be further used to develop new tools for monitoring. The neural networks, as well as the currently used and the newly developed tools, will work together to help researchers objectively evaluate data coming from space’, Alexander Gorbunov added.
IQ

Authors of the study:
Vladimir Samodurov, Associate Professor, Head of theJoint Department with Stack Group
Alexander Gorbunov, Lecturer at the Department of Information Systems and Digital Infrastructure Management
Author: Орешкина Екатерина Сергеевна, July 02, 2018
All texts by
High Tech Physics Cosmos
Physics
Short news
Russian Scientists Discover One of the Mechanisms of Water Formation on the Moon
Water on the Moon could enable the creation of a Russian Lunar Station
Physics
Researchers Discover CP Violation in Charm Meson Decays
Physics
Researchers Determine Space Weather near Earth’s Closest Exoplanet
Researchers have begun shedding light on the possible existence of life on Proxima Centauri b, an exoplanet considered to be Earth’s double
Physics
Dust Cloud around the Moon
Where it comes from and what it has to do with meteoroids.
Spotlight
Sociology
Interview
'We construct a portrait of Russian society'