Thin Films Can Enhance Vorticity in the Ocean

Scientists from the Higher School of Economics and the Landau Institute for Theoretical Physics of Russian Academy of Sciences have investigated how vortex flows penetrate the interior of a liquid. The authors of the article have shown that specific (thin liquid and insoluble) films on the surface of water enhance eddy currents. These currents are produced by the interacting surface waves directed at an angle to each other. The results of the study have been published in Physical Review Fluids.

Since ancient times, it has been known that films on the surface of a liquid affect its movement. The ancient Greeks once poured oil overboard to calm the ocean. The produced oil film increased vertical vortex flows in a thin layer near the surface, which resulted in the suppression of the amplitude of surface waves.

The authors of this study have demonstrated for the first time that thin liquid and insoluble films presented on the surface of water also enhance the horizontal eddy currents. These currents are produced by the interaction of surface waves directed at an angle to each other. 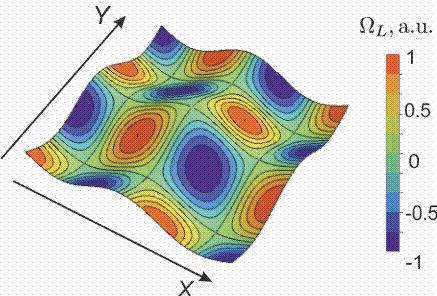 Eddy currents formed due to the interaction of two orthogonal standing waves. The colors represent the intensity of eddy currents. Centers of vortices are located in the nodes of the wave pattern. Neighboring vortices rotate in the opposite directions.

The researchers take into account two nonlinear mechanisms that lead to the generation of horizontal vortices: Stokes drift and Euler vorticity. Until recently, no one had taken into account the last contribution. However, if the film covers the surface of a liquid then it is the leading one.

“Upon the wave motion, the viscosity of a liquid leads to the formation of vertical vortex flows concentrated in a thin layer near the surface. If two orthogonal waves are excited, then the vertical vortices accompanying the first wave will turn slightly due to the slope of the surface created by the second wave, and vice versa. As a result, the projection of the vortex motion onto the horizontal plane appears. The film on the surface of a liquid enhances vertical vortices near the surface, which leads to an increase in horizontal eddy currents,” explains Vladimir Parfenyev, Associate Professor at the Faculty of Physics at the Higher School of Economics.

The authors of the article have established that contributions to horizontal eddy currents, due to Stokes drift and Euler vorticity, depend on depth to different extents. Both terms decay exponentially on a scale of the order of the wavelength, but the Stokes drift decays more rapidly. That is, if you move away from the surface (deeper) to a distance equal to the wavelength, the vortices will not be visible. In addition, the Stokes drift will disappear earlier – this means that the Eulerian vorticity will always dominate at some depth, even if the surface of a liquid is not covered by the film.

The results of the study can be applied in numerous fields, from materials science to geophysics. For example, it is possible to place particles with specified properties (electric, magnetic, etc.) on the liquid surface and, by controlling their movement, control the characteristics of the interface.

In geophysics, the obtained results can be used in the analysis of transport of pollutants or plankton near the surface of the ocean. Furthermore, the scientists state that, based on their calculations, it is possible to develop a method for determining parameters of a surface film, if they are not known a priory.

Scientists from the Higher School of Economics and the Landau Institute for Theoretical Physics of Russian Academy of Sciences, Vladimir Parfenyev and Sergey Vergeles, together with colleagues from the Institute of Solid State Physics of Russian Academy of Sciences, are currently testing their theoretical predictions. The authors of the study hope that the obtained results will explain the anomalously high intensity of eddy currents observed in laboratory experiments.