As part of the LHCb collaboration at CERN, researchers from HSE University and Yandex have been the first to discover CP violation in charm meson decays.

On March 21, representatives of the LHCb collaboration spoke about this recent breakthrough at the Conference on Electroweak Interactions and Unified Theories in La Thuile. This discovery may become a key to solving the mystery of matter-antimatter asymmetry in the universe.

One of the unsolved problems in physics concerns the abundance of matter over antimatter in the universe. During the first split seconds after the Big Bang, matter and antimatter appeared in equal shares. Today, the observed quantity of antimatter in the universe around us is negligibly small. Physicists are trying to understand where it has gone. According to Soviet academician Andrey Sakharov’s hypothesis from 1967, the matter-antimatter imbalance could have evolved as a result of CP invariance violation (particle-antiparticle symmetry).

In 1973, Makoto Kobayashi and Toshihide Maskawa proposed a natural explanation for the CP violation effect. According to the Kobayashi-Maskawa theory, in the Standard Model of fundamental interaction, CP violation happens through a single phase. However, the manifestation of this effect in the decay of particles containing various heavy quarks strongly depends on the other features of the Standard Model of elementary particles. CP violation in charm D meson decays was expected to come to around 0.1-0.01%.

The LHCb (Large Hadron Collider beauty) experiment was carried out at CERN to study B mesons, unstable particles, in the decay of which the matter-antimatter asymmetry manifests particularly well. Scholars analyzed the data received in an LHCb experiment in 2011-2018 and found that the total number of decays of anti-D0 mesons exceeded the total number of decays of D0 mesons. The result has a statistical significance of 5.3 standard deviations, exceeding the threshold of five standard deviations used by particle physicists to claim a discovery. 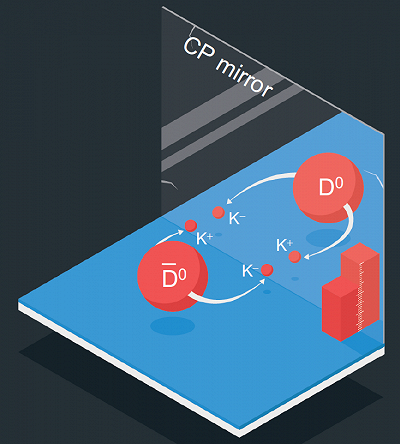 ‘Studying CP violation is extremely important for understanding the mechanisms of our universe’s evolution,’ explained Denis Derkach, Senior Research Fellow at theFaculty of Computer Science Laboratory of Methods for Big Data Analysis (LAMBDA), adding: ‘The discovery of CP violation in charm meson decays is a big step in the study of this phenomenon in heavy meson decays’.

Furthermore, researchers from HSE and Yandex School of Data Analysis applied AI tools in the study, which improved the quality of LHCb experimental data selection and analysis. Yandex’s computation capacities have also been used to model the LHCb experiment events, which is essential for correct interpretation of the physical results.

‘Thanks to our team efforts, the effectiveness of the trigger used to select significant events was increased by 40% on average,’ said Fedor Ratnikov, Senior Research Fellow at LAMBDA Laboratory. He noted that ‘with the use of neural network Bayesian approaches, we have improved the algorithm for detecting the type of particles observed by the detector. We have also developed a “smart” system for quality monitoring of detector operations’.

April 05, 2019
Physics Cosmos physics
Physics
Short news
Russian Scientists Discover One of the Mechanisms of Water Formation on the Moon
Water on the Moon could enable the creation of a Russian Lunar Station
Physics
Scientists Explain Formation of Lunar Dust Clouds
Mathematics
Mathematicians Propose First Continuous Self-organised Criticality Model
Physics
Researchers Determine Space Weather near Earth’s Closest Exoplanet
Researchers have begun shedding light on the possible existence of life on Proxima Centauri b, an exoplanet considered to be Earth’s double
Physics
Thin Films Can Enhance Vorticity in the Ocean
Scientists have investigated how vortex flows penetrate the interior of a liquid
High Tech
Researchers Use Nanotechnology to Improve the Accuracy of Measuring Devices
Scientists from the Higher School of Economics and the Federal Scientific Research Centre ‘Crystallography and Photonics’ have synthesized multi-layered nanowires in order to study their magnetoresistance properties.
Spotlight
Sociology
Interview
'We construct a portrait of Russian society'