For a long time, it was mainly art and theatre critics who wrote for a wide audience about dance from a spectator’s perspective. Later, philosophers and ethnographers began to study dance from different angles. But only when people with first-hand experience, i.e. dancers, joined in, did dance and movement studies get off to a real start. Irina Sirotkina explains how dance studies evolved in the 20th century.

Irina Sirotkina has authored the books Free Movement and Plastic Dance in Russia andThe Sixth Sense of Avant-garde: Dance, Movement and Kinesthesia in the Lives of Poets and Artists, and teaches the elective course Dance and Motion Culture in History and Modernity at the HSE Poletayev Institute for Theoretical and Historical Studies in the Humanities.

Over the last 30 to 40 years, a generation of researchers with direct experience of dance and movement practices has emerged. There is hope that their efforts will help us to see dance from a different perspective: not only as an aesthetic or social phenomenon but also as an internal phenomenological experience driven by the dancer's emotions.

Thus, Maxine Sheets-Johnston, formerly a dancer and now a professor of philosophy and follower of Merleau-Ponty's phenomenology of perception, argues that movement is our primary and most important experience, present from birth on and even before birth in the womb. An infant is born through movement, and the act of birth itself is movement. Phenomenology is primarily concerned with embodiment, one's experience of life as movement and interaction with objects and people. For Sheets-Johnston, movement is the essence of life. The phenomenal reality of embodiment is not translated through words or images but more directly through one's internal sense of motion, muscle feeling, or kinaesthesia. It is the 'sixth' (alongside sight, smell, taste, touch and hearing) sense which, however, emerges before the others in the ontogenesis. Kinesthesia precedes not only other senses but also emotions. Indeed, it is capable of evoking emotions — most people are familiar with the 'muscular joy' of vigorous movement or pleasant relaxation after physical exertion. Even etymologically, the term 'emotion' (e-motion) suggests movement.

Anthropology of Movement and Dance

The first publication about dance that had any relevance to anthropology was Curt Sachs' World History of the Dance. In it, Sachs describes an evolutionary continuum from animal 'mating dances' (he uses mountain chickens in Latin America as an example) all the way to West European ballet. Many books on the history of dance propagate the persistent myth that early dance was 'rough', 'forceful', 'primitive' and 'feral'. Sachs considered contemporary non-Western tribes to be inferior to Europeans and referred to their dances as 'more primitive' (he also describes some ethnic groups such as the Kente and the Beteke dwarfs of the Malaccan forests as 'danceless peoples'). But just as modern non-Western peoples do not represent earlier stages of Western cultural development, there is no reason to believe that non-Western dance represents earlier stages of Western dance. At the time when Sachs wrote his book, many anthropologists were making similar generalised statements. Franz Boas, for example, felt that people had a basic need for order and rhythm, which he used to explain the origins of dance. Unlike Sachs, Boas believed that an individual dance tradition could only be understood in terms of the cultural background of which it is part.

Dance of the masks of the Dogon, Mali

More or less speculative theories as to what dancing looked like at the 'dawn of civilization' persisted even after World War II. Fortunately, by the end of the twentieth century, universal categories such as 'dance in general' and unsubstantiated judgments about 'primitive' dance were gradually becoming a thing of the past. At the Second Congress on Research in Dance (CORD) in 1969, anthropologist Joann Wheeler Kealiinohomoku gave a talk which overturned contemporary ideas about 'ethnic dance'. The title of her report was provocative: An Anthropologist Looks at Ballet as a Form of Ethnic Dance. In it, she showed how conventional and culturally dependent were the dance forms considered 'high art' in the West and how patronising was the label of 'ethnic' attached by Western ethnographers to non-Western dance forms. She urged everyone to abandon the myths propagated and perpetuated by armchair anthropologists and to focus instead on field research of both non-Western and Western kinds of dance. Her colleague, South African dancer Drid Williams, taught dance history to a group of Ghanaian students in the early 1970s. Before she could teach them about the history of ballet, she had had to explain what European theatre was. A completely different teaching context forced her to re-examine a Western-centric view on dance. Williams took up anthropology and wrote a dissertation based on a study of the Catholic Mass, classical ballet and martial arts. Anthropologists of the new wave, including Kealiinohomoku and other researchers, created the anthropology of movement and dance, which studies various dance forms and styles, sign languages and other systems of human motion.

Dance is a great way to learn more about people and communities. For example, studying the so-called 'Soviet mass dance' gives one a better understanding of Russia in the 1920s and 1930s. 'Mass dance' was created in opposition to salon dances such as tango, foxtrot and shimmy, which were considered bourgeois, erotic and generally unworthy of the 'new Soviet person'. So choreographers were encouraged to create dances which could be performed in groups rather than pairs. In addition to this, the dance moves needed to be simple and energetic like physical exercise and the accompanying music had to sound cheerful and uplifting.

School polka. Loktev Song and Dance Ensemble of
the Moscow Palace of Pioneers

Involved observation is often used to study dance, where researchers learn and practice dance styles specifically for the purpose of studying them. Thus, professor of Temple University, Sherril Dodds took up professional training in neo-burlesque and even performed in Broadway shows while carrying out an ethnographic study of strippers. After that, she learned breakdancing and conducted a comparative analysis of facial expressions in neo-burlesque and hip-hop. Eventually, thanks to the anthropological approach, there was a shift of focus in dance studies from observing performers on stage to looking at ordinary people making dance part of their everyday lives.

In addition to phenomenologists and anthropologists, the new concepts of bio-power have had an enormous impact on dance studies and, more broadly, on our understanding of corporeality. According to the French philosopher Michel de Certeau, any power, including the power of law, writes itself on the backs of its subjects. Examples include the army, sports and ballet where control of the body is extremely tight. Michel Foucault, reflecting on how disciplinary power inscribes its effects on the body, also outlines ways in which the body can avoid repressive control. In 1966, Foucault gave a talk entitled 'Le corps utopique' (The Utopian Body) for France Culture Radio, in which he stressed that control of the body is mainly exercised visually ('being in someone's gaze'). Whatever escapes the gaze — like kinesthetic sensations that are invisible — can slip away from the controlling power. Based on his ideas, internal aspects of embodiment have been described as potential refuge from societal pressure. Using disciplinary practices, the authority inscribes itself on the body of its subjects, but an individual can regain power over their own body — and ultimately, personal agency — through kinesthetic experience. Therefore, dance is more than merely a physical discipline: it is also an expression of vitality, joy and the poetry of movement experienced by the dancer. Dance cannot be fully understood from the perspective of control or discipline without reference to freedom, from the freedom of movement in time and space to the freedom of improvisation. It is no accident that the founders of 'free' (from the rigid constraints of classical ballet) dance in the early twentieth century described it using terms such as  'delight', 'ecstasy' and 'Dionysianism'. 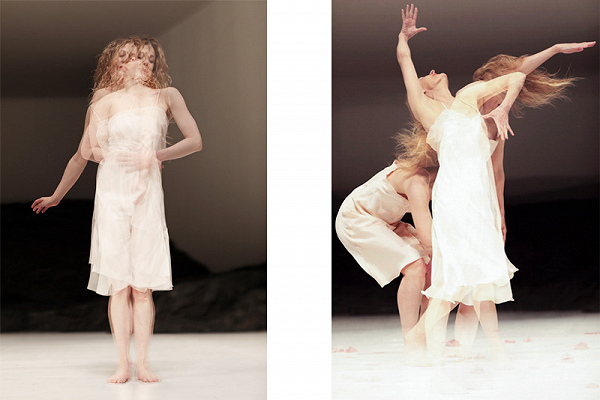 The idea that the body can generate knowledge is a popular recent debate. It is argued that dance combines propositional knowledge (knowledge-what) with skill, or practical knowledge (knowledge-how). People in contemporary dance tend to associate creative work with research and often use terms such as 'research' and 'lab'; sometimes, they say 'do research' instead of 'do choreography'. By creating choreography, particularly for venues other than a conventional theatre, dancers use movement to explore space, time and circumstances.

Movement is believed to precede cognitive processes and perhaps even generate them. Back in the 18th century, French philosopher Maine de Biran argued that movement lies at the core of our will and goal-setting. He was the first to describe 'voluntary effort' as internal tension, a mental impulse felt in the body. Movement precedes thought by setting internal coordinates, a scheme of the body, with its upper and lower parts, inside and outside, right and left, etc., which leads to an early awareness of space and eventually leads to abstract thinking. Immanuel Kant wrote about schemes (schemata) in relation to thinking, but even before him, Aristotle had described movement and gesture as schemata. The notion of kinesthetic intelligence first described by Soviet physiologist Nikolai Bernstein was further developed by American psychologist Howard Gardner. According to Maxine Sheets-Johnstone, kinesthetic intelligence is inherent not only in humans but also in animals insofar as they can move and coordinate their movements. Her belief that movement creates a unique experience which is similar to intellectual experience is shared by other philosophers and anthropologists, including Tim Ingold and Carrie Noland who argue that by performing new movements, one develops not only skills but also kinesthetic, bodily knowledge.

Indeed, in some martial arts, in particular, Japanese varieties, novices must practice calligraphy for a year before picking up a sword. They use a brush dipped in black ink to draw hieroglyphs in one stroke so that they cannot be corrected, erased or retouched later on. In calligraphy, the handwriting motion must be as precise as a performative gesture or a dance step. Should a student do a poor job, the Master will hang the poorly drawn hieroglyph up on the classroom wall and keep it there for a year for the student to see. According to Budo masters, calligraphy and sword fighting rely on the same principle of body movement: to draw a hieroglyph in one continuous stroke, the hand must follow an impulse coming from the centre of the body. Similarly, in a sword fight, the entire body must engage in the action, guided by a central impulse. Sensations associated with these practices are an excellent example of knowledge developed via kinesthetic experience.

But in order to share this knowledge and make it useful for others, bodily experience must be verbalised or formalised. In addition to sharing this knowledge in dance classes, at seminars and workshops, teachers create new formats such as lecture-performance and lecture-demonstration. Recently, Sherril Dodds gave a performative lecture on the epistemology of breakdancing. Dodds argues that moving and doing are at the core of knowledge generation; she views breakdancing practice as an alternative approach to pedagogy which involves being part of a community and training as a team.

My own lectures on dance studies, e.g. focusing on Isadora Duncan's dance, musical movement or the Soviet 'mass dance', often take the form of a lecture-performance leading to a practical session. I find it important that my students learn the subject through their bodies as well, so that it becomes their embodied knowledge. Sometimes this approach triggers an ambivalent reaction in the academic community which traditionally prefers knowledge which is verbalised and presented in a textual form. In this case, academia acts a conservative institution defending its boundaries. I am grateful to HSE University for supporting dance studies and giving me the opportunity over the last six years to teach elective courses in movement and dance studies.