LHCb (Large Hadron Collider beauty) collaboration, one of the LHC (Large Hadron Collider) experiments, reported that their detector has identified particles that have not previously been detected in physics experimentally – excited omega baryons (Ω-b). Just several years ago, detecting such particles in LHC was believed to be next to impossible. Among proton particles, the excited ‘charmed omegas’ were preselected by an algorithm created by staff from the HSE Laboratory of Methods for Big Data Analysis  and Yandex LLC. IQ.HSE talked to Denis Derkach and Fedor Ratnikov about their collaboration’s ‘fresh catch’ and about the point of ‘fishing’ on LHCb in general.

Particle collisions at LHC finished a little more than a year ago. The planet’s largest experimental setup is being upgraded: equipment is being renewed, and experimental platforms are being expanded. LHC will be back in operation in 2021.

Meanwhile, discoveries are still taking place. LHCb, one of the LHC experiments, continues to produce research results even though the collider has stopped.

Unlike CMS and ATLAS (LHC experiments that discovered the Higgs boson – IQ), LHCb is interested in the data from  the whole observation period, which is why it gets most of its results after the end of the experimental phase, Denis Derkach explained. Now we analyse jointly bigger samples from previous runs of collider, for which the data was collected from 2011 to 2018. 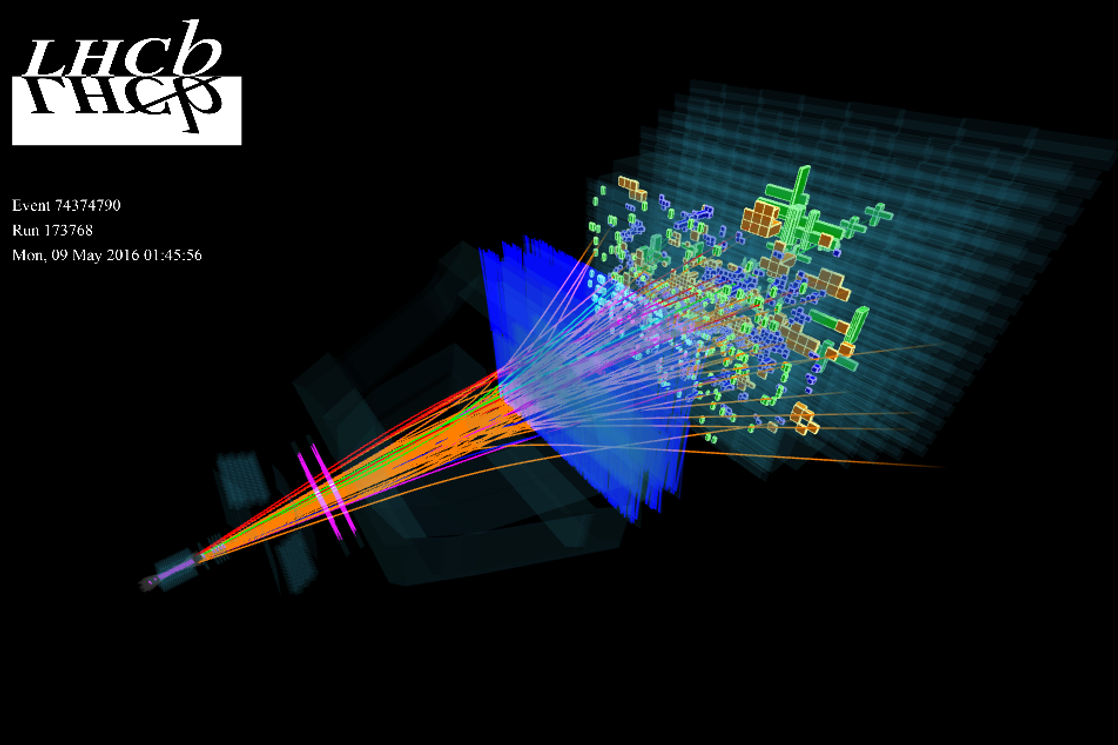 Visualization of a typical event on LHCb / LHCb Collaboration / CERN

In spring 2019, LHCb collaboration announced that their experiment has registered violations of CP-symmetry in charmed mesons, a fundamental particle physics law that was long hunted by experimentalists. In summer, they reported that they had ‘caught’ a previously unknown type of pentaquark. Now, they report the first observation of an excited omega baryon in the data.

Baryons are elementary particles of the matter that we know, the matter consisting of atoms and molecules. About 5% of all matter in the universe is baryonic matter, with the rest being dark matter (~25%) and dark energy (~70%): contemporary physical science does not really doubt the existence of the latter two, but it has not yet discovered their nature.

Baryons consist of quarks, and there are usually three of them, except for tetra- and pentaquarks (four- and five-quark baryons, respectively), which have also been observed in the Large Hadron Collider. 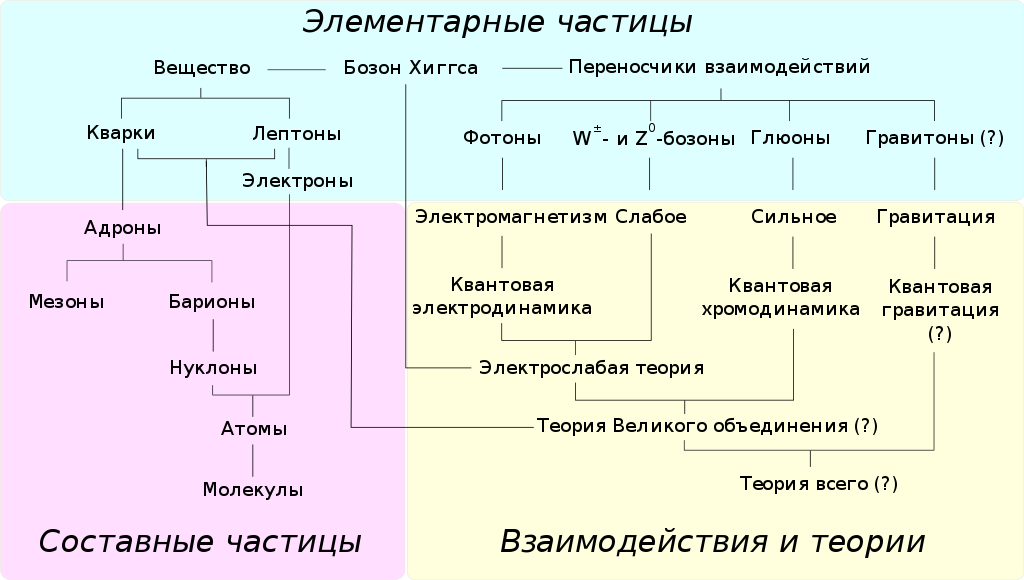 Omega baryon Ω-b (also called ‘bottom omega’) is a charmed and double strange baryon, since it consists of one b- (beauty or bottom) and two s-quarks (strange).

Charmed omega was first caught in 2008 at the Tevatron accelerator in the United States. Researchers initially thought that its mass was quite different from what theoreticians had predicted, and the paradox at last had a chance to ‘break’ the Standard Model. But repeat tests on data from another experiment and observation of this particle in LHC in the late 2000s showed that the Standard Model was still fine (unfortunately!), and charmed omega didn’t make a breakthrough into new physics.

The structure and mass of the observed excited states of charmed omega are consistent with theoretical expectations. All four particles registered in the collider have masses about six times higher than a proton: 6316, 6330, 6340 and 6350 MeV.

They Managed to Find It

‘It has long been believed that LHC is not meant to be used for such discoveries,’ said Derkach, ‘and that these particles would be buried under the huge amount of noise registered by the detector, and, taking into account the low probability of [such particles’] appearance, would not allow the discovery to be made. But the LHCb experiment used a precision system of triggers and overcame this prejudice.’

To understand what matter consists of, physicists make its parts collide with one another. In the Large Hadron Collider, researchers beat protons against one another (they also do it to lead ions, but it is a different story). Proton beams are accelerated to 0.999999991 of light speed, their energy at this moment exceeds their mass by a thousand times, and when they collide, a bunch of energy evolves with temperature much higher than stellar, which gives birth to thousands of new particles.

Researchers explain that such collisions are very ‘noisy’ events. Each proton consists of three quarks surrounded by a cloud of gluons (massless particles responsible for strong interaction). When protons collide, new quarks and gluons evolve, and all of them collide with each other. They sometimes unite in new particles, which break down into more new ones; this is in one collision only, and there are tens millions of them a second.

It is impossible to study such events in the way that is traditionally done in the natural sciences —simply observing them one after the other—comes as no surprise. That is why machines monitor and register what is happening in the collider.

But this is a peculiar task. Besides the fact that the collider experiment generates a huge amount of data per second, these data include lots of ordinary events that do not bear any cognitive value for contemporary science. To distinguish new knowledge from what is already known, special algorithms – triggers – are used, which come into action in case of events with certain characteristics. According to IQ.HSE respondents, 99% of LHC tests use machine-learning methods in their triggers today. Triggers are united into chains and monitor the initial flow of events (about ten million per second) to select only the events that might be of interest for future analysis (about ten thousand per second).

LHCb is not only not an exception in this regard but is ahead of the other experiments. To catch the charmed omega, it used the so-called ‘topological trigger’—an algorithm that selects only the events that lead to evolving particles with b-quarks. 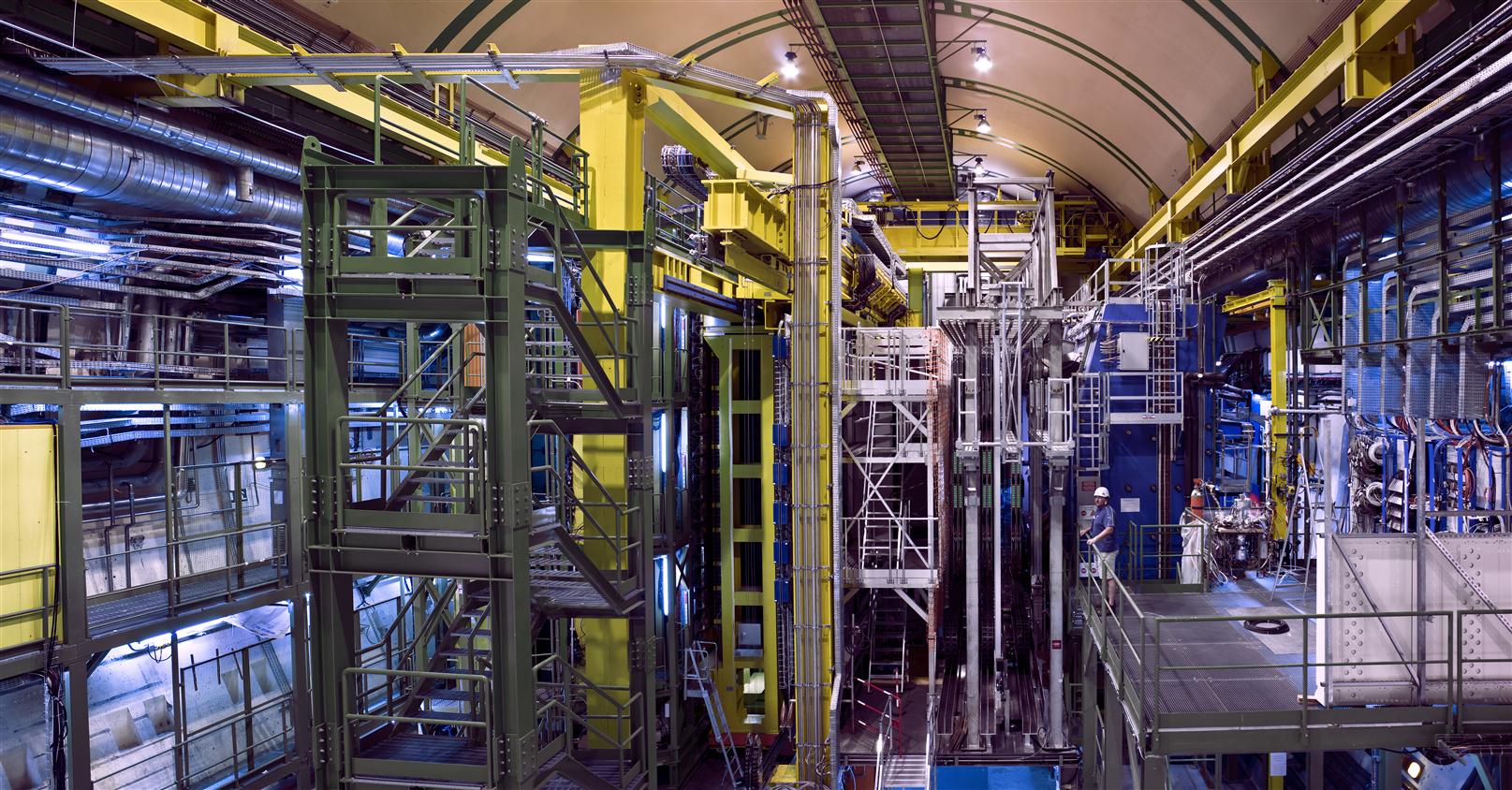 ‘This trigger is based on employing oblivious decision trees,’ said Denis Derkach, Senior Research Fellow at the Laboratory of Methods for Big Data Analysis, ‘Andrey Ustyuzhanin, Lab Principle Investigator together with Tatiana Likhomanenko, Alex Rogozhnikov in

collaboration with LHCb colleagues devised a new solution on top of MatrixNet This solution allows selecting the data in significantly more effective way. It doesn’t search for specific

decays or specific physical processes, but groups of decays with common topological properties, which might be interesting for us. This approach allows the experiment to cast a wide search. If we only look for, say, pentaquarks, we could only find pentaquarks. In contrast, the proposed approach allows searching for many different new particles and phenomena.’

It is necessary to optimize the trigger, because the computational resources of the LHCb ‘fishing net’ are strictly limited. The detector is located at 80m under the ground, and on the same depth, there is a ‘farm’ of 1,500 computers, and it is simply impossible to install many more machines there.

Before 2019, LHCb had used a combination of hardware and software trigger implementations. After the launch of the experiment in 2021, researchers plan to completely switch over to software implementation and expand the opportunities for online analysis of physical events before the data are saved in the data storage centre. Such changes will allow a considerable increase in the experiment’s sensitivity and flexibility.

Looking for Something Strange

Technically, it is definitely an achievement—the first-ever registration of an excited charmed omegas. But physicists talk about this discovery with a little sigh of regret: experimental data have again complied with theoreticians’ predictions.

‘First of all, this is a check of everything we have been doing all these years,’ said Fedor Ratnikov, Leading Research Fellow at the HSE Laboratory of Methods for Big Data Analysis. ‘We want to find something new, but it always turns out that the existing model is good in predicting the results of both these and the new measurements.’

At the same time, almost all ‘fishing rods’ at LHCb, according to the researcher, are placed in points where it is possible to find deviations from the Standard Model. ‘If we didn’t need the new physics,’ Ratnikov said, ‘we would be studying the properties of inelastic scattering. But the area of our research has been chosen to get a more demonstrative result. This is comparison of the Standard Model with alternative ones. All [our] triggers are aimed at this.’

The search for something strange is not over with catching a beautiful doubly strange omega. The recent publication is not the last in the series of results received by LHCb collaboration over these years. The scientists say that the main flow of publications is ‘only just beginning.’

This means that they have already found something else.