People’s values of personal choice, suсh as their attitudes towards abortion, divorce, and premarital sex, are usually determined their level of education, age, religiosity, and social status. At least this is the case in many countries such as the US and those in Europe. In a recent study, HSE sociologists found that in post-Soviet countries, personal values are most determined by people’s level of patriotism.

As one theory of modernization suggests, egalitarian values ​​take root quickly in rich and politically stable societies, while in countries with a relatively low quality of life, a preference for ‘survival values’ is observed. These values include a desire to preserve the status quo, achieve physical and material security, and resist otherness. Generally, when living conditions improve, the value of individualism increases while the perceived need for social control decreases. However, as some studies show, a rapid economic downturn can lead to unpredictable consequences and manifest itself both in the popularization of the values ​​of equality as well as in the disappointment in these values.

In post-Soviet countries, the transition from a planned economy to a market economy was accompanied by political instability and economic stagnation. Despite the fact that each country of the former socialist camp has had its own path of development, they are united by a prevalence of patriarchal and nationalist ideologies. When a nation is defined by ethnicity (‘blood and soil’), as opposed to the constructivist approach, in which ethnicity and nation are considered to be politically constructed, an emphasis is often placed on primordial rhetoric.

The state propaganda of many post-Soviet societies places great importance on family values and fertility, while practices of individual choice, such as abortion, divorce, and premarital sex, are portrayed in the media and official discourse as dangerous to the nation and state.

In transitional societies that have experienced economic collapse or disintegration, the desire of elites to reconstruct national identity can lead to a revival of traditional values ​.

Scientists looked at the relationship between values of personal choice and national pride.

Approval of individual choice was measured on a scale of 1 to 10, where 1 indicated that a given decision ‘can never be justified’ and 10 indicated that a given decision ‘was always justified’. The extent of a subject’s nationalism was determined by two questions. The first question was, ‘How proud are you that you are Russian (Belarusian, Uzbek, etc.)?’ The second question regarded the main goals of the state. For this question, respondents had to choose from four options: ‘military strength’; ‘high level of economic growth’; ‘improvement of the urban environment and rural regions’; and ‘ensuring that the voice of ordinary people is taken into account when making decisions’. If a respondent answered that ‘military strength’ should be a state’s main goal, then his or response was considered to be militaristically oriented. In addition, researchers took into account respondents’ level of education, age, gender, religiosity, and marital status.

Despite the prevalence of divorce, abortion and premarital sex in post-Soviet countries—Russia ranks first in the world in divorces (with 51% of marriages ending in divorce), while Kazakhstan, Belarus and Estonia rank among the world’s top five countries for highest abortion rates—residents of these countries expressed conservative views on all three practices. Researchers, however, consider these expressions to be more a matter of lip service than actual practice. In their opinion, doublethink is characteristic of inhabitants of the former Soviet Union, where views that differed from those generally accepted were persecuted, and to this day remain in some places prosecuted by law and condemned by society. ‘For example, homosexuality, which also falls under to purview of “values ​​of individual choice” here, is so taboo in the post-Soviet context that it is almost impossible to study attitudes toward it,’ notes Veronika Kostenko, one of the study authors. ‘People are used to living in a system of double standards where people say one thing in public and another at home.’ 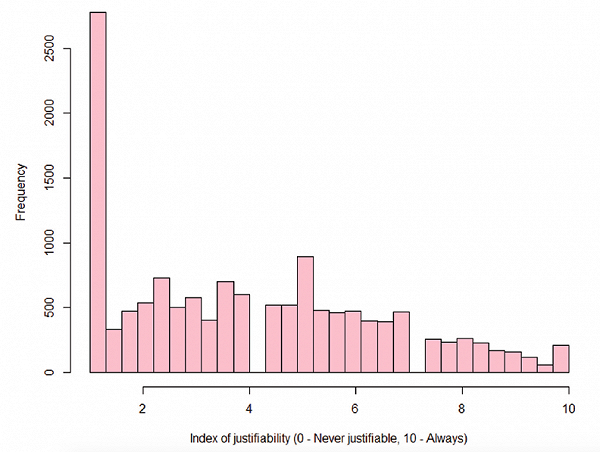 
The researchers found that the most significant predictor of conservative attitudes in all respondents was national pride. To the contrary, the other factors of gender, age, religiosity and education, if they did have any influence, did not do so in concert or consistently in every country.

For example, only in Armenia, Azerbaijan, Belarus, and to a lesser extent, Georgia, was there a relationship between having higher education and holding slightly less negative views towards abortion, divorce, and premarital sex. In other countries, including Russia, the factor had no effect.

Gender had some significance only in Armenia. There, women were less critical of values ​​of personal choice less than men.

The researchers observed a link between age and values of personal choice among respondents from Belarus, Russia, and Ukraine. In these countries, older generations are less tolerant of abortion, divorce, and premarital sex. However, in Azerbaijan, Georgia, Kyrgyzstan, and Uzbekistan, researchers found no generational differences with regard to these questions.

In Estonia, Russia, and Ukraine, the more frequently an individual attends church, the more likely he or she is to reject values of individual choice. This is also the case, to a lesser extent, in Azerbaijan and Belarus.

As for marital status, divorced people turned out to be the most tolerant only in Azerbaijan, Uzbekistan, Belarus, Georgia, and Ukraine.

The influence of national pride is especially significant in Armenia, Belarus, Georgia, Kazakhstan, Uzbekistan, and, to a lesser extent, Estonia and Ukraine. In these countries, the higher the respondents’ reported national pride, the stronger their rejection of the values of individual choice.

In Russia, Kyrgyzstan and Azerbaijan, militarism is more important than national pride. Respondents in these countries who did not approve of abortion, divorce, and premarital sex believed that military power should be their state’s main goal.