Where Does the Russian Economy Stand after a Year of the Pandemic?

The crisis that has hit the Russian economy along with the COVID-19 pandemic is severe and unique. There have been hard shocks, unprecedented state anti-crisis measures and, for the first time in the post-Soviet era, a softer recession in Russia than elsewhere in the world generally. Researchers of the HSE Centre of Development Institute performed an analysis of the year 2020 and summarized their resulting figures, conclusions, and forecasts in a report, ‘Macroeconomic Effects of the COVID-19 Pandemic and Prospects for Economic Recovery’. The report was presented at the HSE/SBER XXII April International Academic Conference.

According to the report’s authors, Russian GDP decreased by 3% by the end of 2020. This result is remarkable when set against the strongest global economic recession since the mid-20th century (-3.5%), according to the IMF. 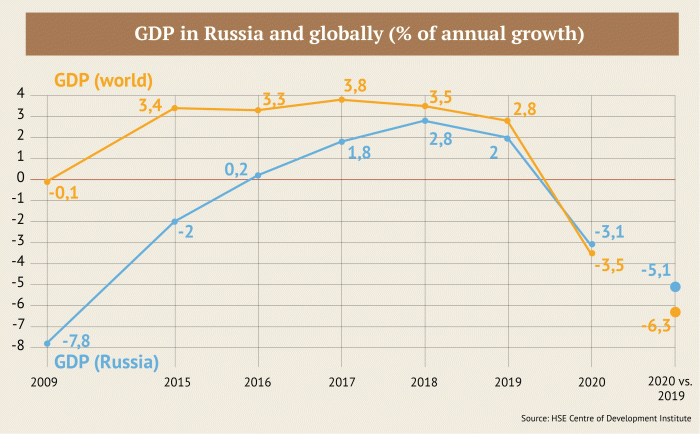 The economic crisis led to a decrease in investments and export volumes, manufacturing difficulties, and falling oil prices. Most of all, domestic demand and consumption fell.

The economy shrank considerably. This occurred not due to decreasing incomes, as usually happens in a crisis, but due to pandemic-related restrictions: distancing, decreased mobility, and changing consumer habits.

The uniqueness of the crisis was not limited to non-economic factors. It was also due to its fast and unusual progression.

The previous crises (1998, 2009, and 2015) mostly started during the autumn and triggered the worst of the crisis in the following year. The pandemic, which started in China in December 2019, only seriously hit the Russian economy in Q2 2020, when a strict lockdown was introduced.

In Q3, with the first wave of COVID nearly over, restrictions were relaxed, and the economy, along with the population, rebounded from the shock. The result was a period of powerful recovery growth, which regained more than half of the losses.

The scale of the second wave of infection in Q4 exceeded the first, but the economy had adjusted somewhat, and restrictions were weaker. As a result, the reaction of the GDP to the shock was calmer, recovery slowed down, but there was no collapse.

2020 marked an unprecedented decrease in mineral extraction in Russia and a sharp fall in oil prices. The volume of extraction started falling in May, following an OPEC+ agreement. Compared to 2019, Ural oil fell by 30%, from $64 to $42 per barrel. Together with growing foreign trade limitations and decreasing external demand, this led to the largest decline in Russian exports in the last 25 years.

However, the situation varied with different types of exports. The value of fossil fuel supply reduced to $149 billion (a decrease of 38%), while the value of other exports remained almost unchanged.

A considerable portion of these ‘other’ exports consists of non-resource non-energy exports (NRE): grain, vegetables, fruit, chemicals, fertilizers, worked stone, cast iron, steel, and non-ferrous and precious metals. In 2020, the value of NRE even grew, mostly thanks to sales of gold and products connected with the agricultural industry.

There was no decline in imports. The value of international trade fell by only 6% and reached pre-crisis values by the end of the year, as lockdown measures were lifted and deferred demand was realized. This does not include consumer import volumes, particularly international tourism and hospitality. Both tourist export and import were practically wiped out, with their value falling by about 75% compared to 2019.

Investment Is Not for Everyone

The fact that the coronacrisis has been less severe for Russia than the world at large is confirmed by the success of its manufacturing industry and the relatively small reduction in investment activity. The manufacturing industry recovered as early as in July. The results of December 2020 and January 2021 showed a continuing increase, mostly thanks to the production of textile goods, paper, chemicals, medicines, plastic and metal goods, computers, optics, machines, and equipment.

In 2020, the Russian economy received 20.1 trillion roubles of investment. This decrease of 1.4% is much lower than at the peak of the recessions in 2009 (20.9%) and 2015 (13.1%). The reason is that the economy had not been overheating before the crisis and the weakening of the rouble was milder. On the other hand, there is a low basis effect: even before the pandemic, the investment process in Russia had already slowed down considerably. 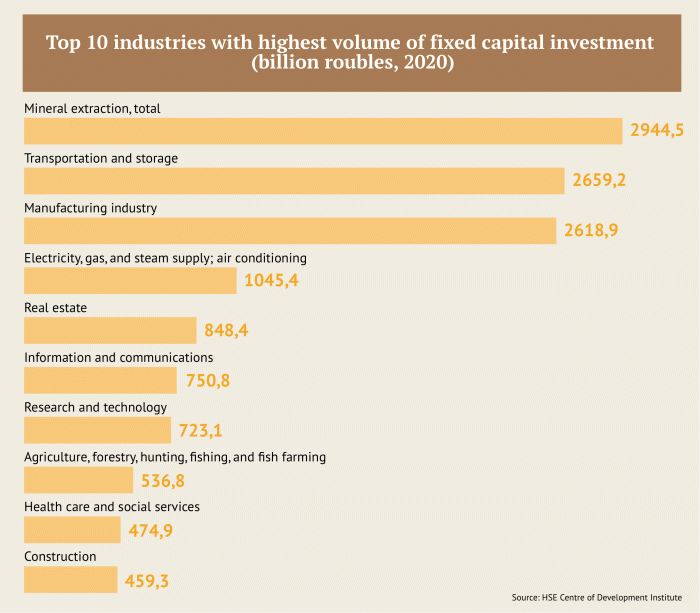 In addition, the pandemic did not hit all industries. Producers of goods and services that are in demand during the pandemic (health care, social aid, research, IT, agricultural exports) received new opportunities; which means that investment also grew. 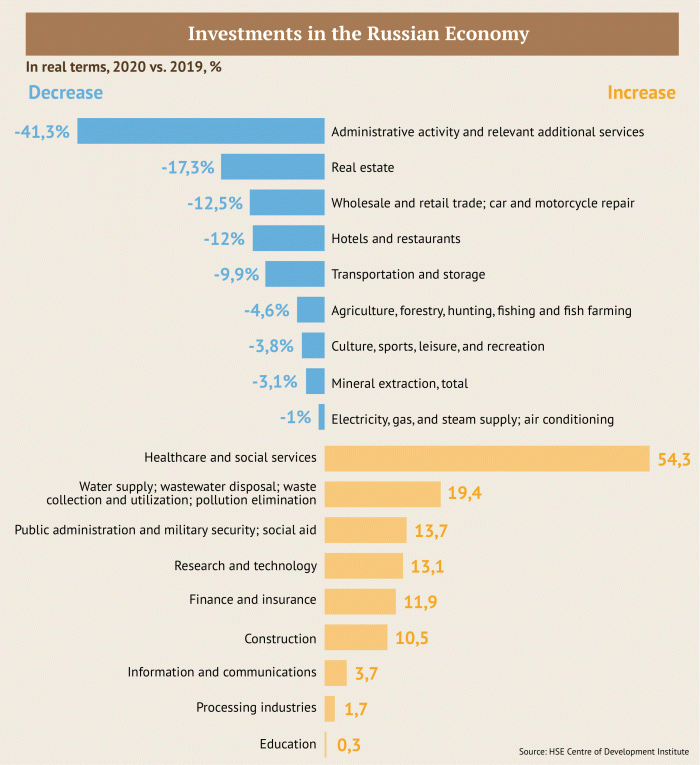 The situation with foreign direct investment (FDI) was worse. FDI flows into Russia plummeted, to its lowest point since 1998.

However, the Russian situation is not an exception, according to the report. The global volume of FDI was about $860 billion in 2020, compared to $1.5 trillion in 2019. The decrease among developed countries was 69% on average. Oil exporters (including Russia) suffered from a decrease in investors’ interest in the oil sector.

Investment reduction was also seen in the small business sector. They suffered the most during the crisis, and they had already needed incentives before it. The share of Russian small and medium-sized enterprises (SMEs) decreased between 2016 and 2019, due to reasons such as Russians’ reluctance to start businesses, a lack of trust in commercial enterprises, and the low efficiency of support programmes for SMEs. The contribution of SMEs to the Russian GDP was slightly more than 22% by 2020 (50-60% in developed countries).

The state allocated 104 billion roubles as direct support for SMEs in the crisis year, but this, as well as other measures, were targeted for current damage localization; the issue of large-scale stimulation of investment still remains.

A sharp increase in social benefits was one response to the crisis. Pensions grew faster than inflation. Considerable public expenditure (9 trillion roubles) went to unemployment and maternity benefits. 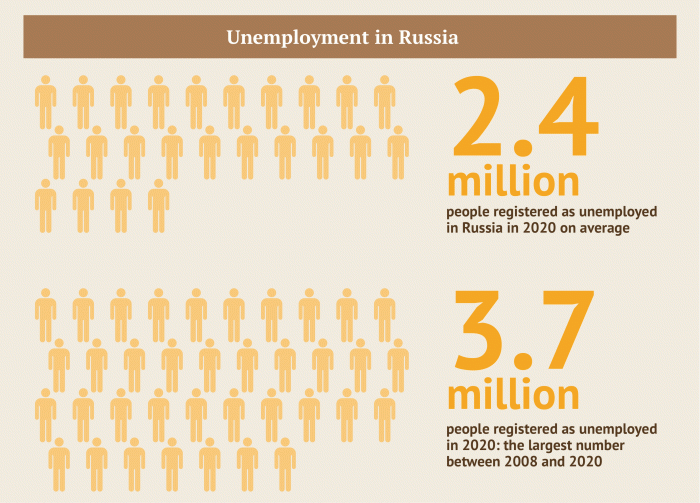 Real disposable household income fell by 3.5% by the end of the year. Property owners, entrepreneurs, and those whose key income was related to ‘other’ financial resources, including those hidden from statistics, incurred the most losses.

Surveys have shown that the share of citizens who reported that their financial situation worsened grew in 2020. According to the Levada Centre, 64% of Russians said that their living standards fell, while 59% said that they lost the opportunity to earn good wages.

The pandemic and the support measures for the population and the economy took more from the federal budget than in 2014, which was followed by cuts in public expenditure for the following four years.

This record growth in spending led to a budget deficit of 4.1 trillion roubles (3.8% of GDP). The main source to cover this deficit was internal loans. These brought 4.6 billion roubles, which was spent on funding the deficit as well as repaying 304 billion roubles of foreign debt.

According to the Federal Treasury, local revenues decreased in 32 regions in 2020 as compared to 2012. In 11 of them, the reduction was more than 10%.

Regions that suffered the highest revenue decreases were those with economies highly dependent upon raw materials (Tyumen Oblast, Yamalo-Nenets Autonomous Okrug, Komi, Tatarstan, and Bashkortostan). Due to falling oil and gas prices, these regions lost up to 35% in income tax revenue.

The growing spending of regional budgets in constant prices was the highest in contemporary Russian history: 11%. This was mostly due to additional funding of healthcare and social policy.

The deficit of consolidated regional budget reached its highest point since 2006: 677 billion roubles. The largest (-136 billion) was in Moscow. 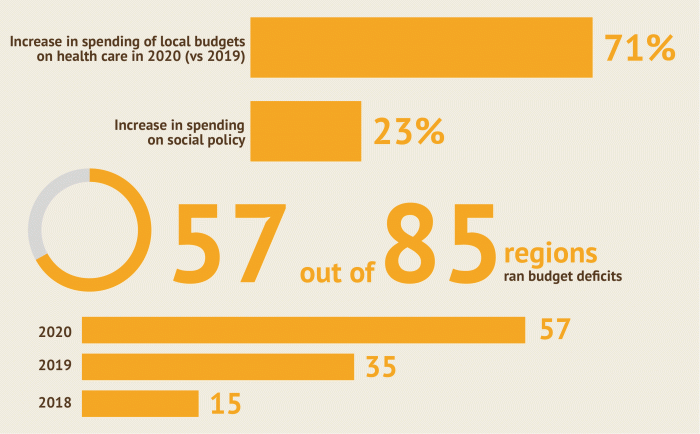 This year, the financial situation in many regions will be even harder, experts at the HSE Centre of Development Institute believe. Federal transfers are going to be cut by 25%, reserve accounts are already used up, and the factors for spending remain the same: the pandemic and the need for additional support for the population and businesses.

Hoping for the Better

The economic results of 2020 in Russia turned out to be better than those in many other countries, as well as the forecasts made in the beginning of the pandemic. Meanwhile, there are no definite trends: by January 2021, trade and processing industries reached their pre-crisis levels, mineral extraction recovered by half at best, and the service industry still has a long way to recovery.

And still, economic success, increasing oil prices and a growing vaccination campaign give hope for positive statistics in the near future. The consensus forecast by the HSE Centre of Development Institute, based on a survey among independent experts, February 2-11, 2021, predicts:

Recoveries in the manufacturing industry (3.2%), retail trade volume (2.5%), and fixed capital investment (2.4%), which will be faster than GDP growth and higher than the 2019 indicators;

Comparatively low real disposable household income growth: by the end of 2022, the 2019 level will be exceeded only by 0.5%;

For the long term, a stable annual economic growth of about 2% is forecasted. However, such results can be expected only with certain oil prices, which still remain the primary risk factor.
IQ

De-urbanisation: Muscovites retreat to the countryside, away from the pandemic

Loyalty to family and mutual assistance are important regardless of culture