In Mexico, a pilot project applying artificial intelligence (AI) algorithms enabled the Tax Administration Service to detect 1200 tax-evading companies and 3500 fraudulent transactions within three months – a task that would have taken 18 months using conventional methods. Despite some obvious benefits, the use of AI-based solutions to counter corruption also entails several challenges, according to experts of the HSE Laboratory for Anti-Corruption Policy (LAP) and the HSE Faculty of Law who have examined the relevant experience of several countries. A report based on the study’s* findings was presented at the XXIII Yasin (April) International Academic Conference hosted by the Higher School of Economics.

The Case for Technology

In Colombia, almost one in five COVID-19 related public procurement contracts was revised in 2020, and a number of government officials lost their positions and faced criminal charges for their involvement in fraud schemes detected by OCEANO – a system launched in 2018 and capable of analysing public procurement and budget information by using innovative Big Data tools.

Rosie, an AI algorithm created in 2017 as part of the open project Operação Serenata do Amor in Brazil, examines the expenses of members of the Brazilian congress. In Belgium, one of the world's largest brewers Anheuser-Busch InBev (AB InBev) applies machine-learning technology to enable its Operation BrewRIGHT platform to detect high-risk business partners and potentially illegal payments.

Using AI to counter corruption is not only achievable but often provides the only feasible solution, particularly given the high degree of digitalisation in public administration and services and the availability of databases making it possible to create algorithms for ongoing anti-corruption monitoring. 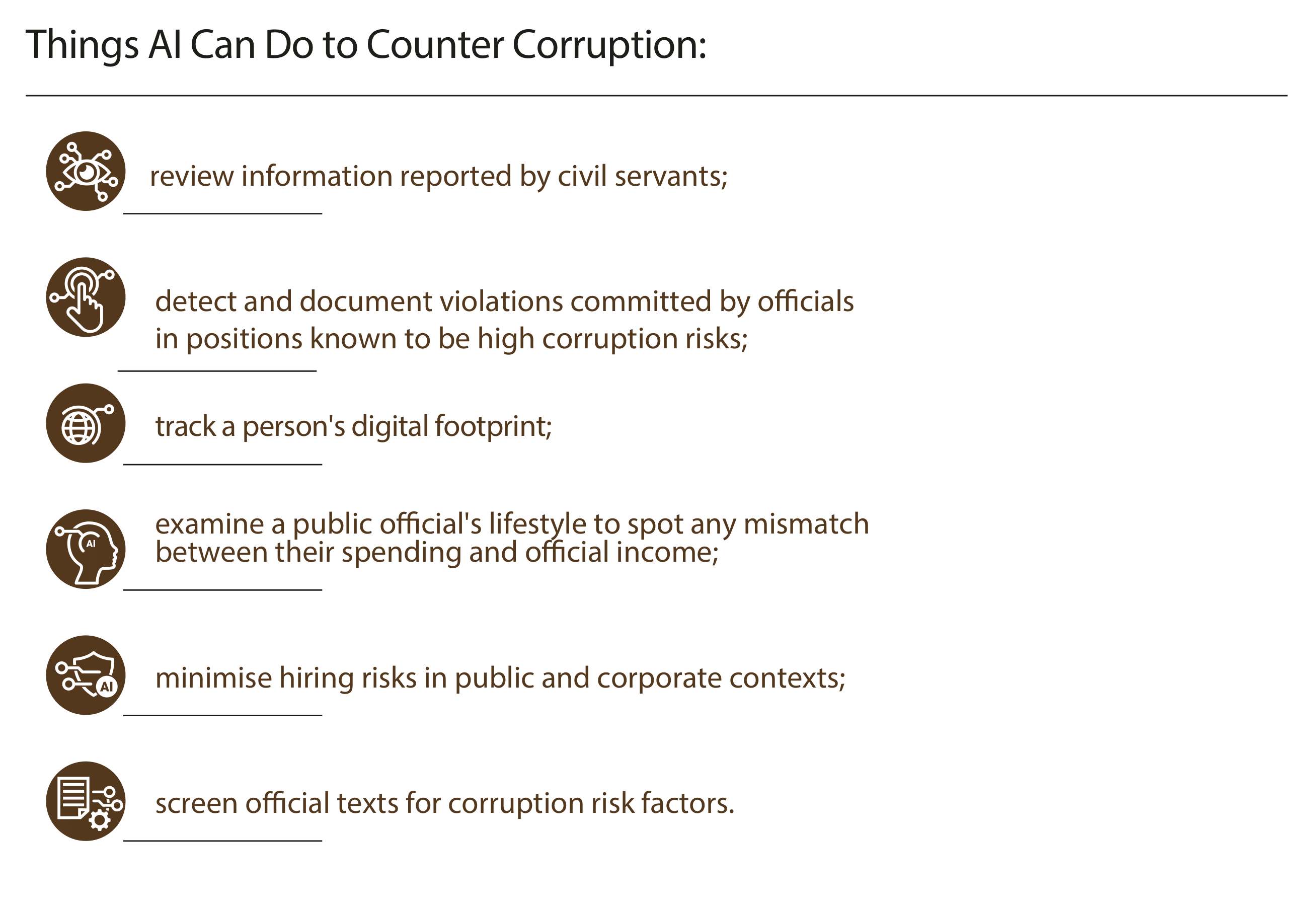 Computer vision, natural language processing, speech recognition and synthesis, and intelligent decision support systems have all been used to counter corruption in high-risk spheres such as public administration, state supervision and control, justice administration (in particular to detect frameups), and corporate compliance.

Artificial intelligence can automate recruiting, providing the ability to hire more efficiently. Many employers already appreciate the benefits of this approach, and recently, in the context of COVID-19, HR departments have increasingly been turning to AI-based solutions, even though this practice is still far from widespread.

Among other things, digital technology can source and pre-select candidates, set up interviews – which can then be conducted by robots – and check the integrity of a potential civil servant or corporate officer.

What is required when applying AI to recruitment? Job positions with known corruption risks must be identified (in Russia, such jobs are listed in the Ministry of Labour's Guidelines) and a system of corruption indicators suitable for machine learning must be developed.

According to experts, the issues encountered in recruitment are common and often repeated, providing plenty of source material for training algorithms.

A range of AI tools can be used to screen out potentially corrupt applicants for official positions. Their personalities can be analysed using natural language processing and computer vision, and business simulation games can help assess dominant attitudes and values. 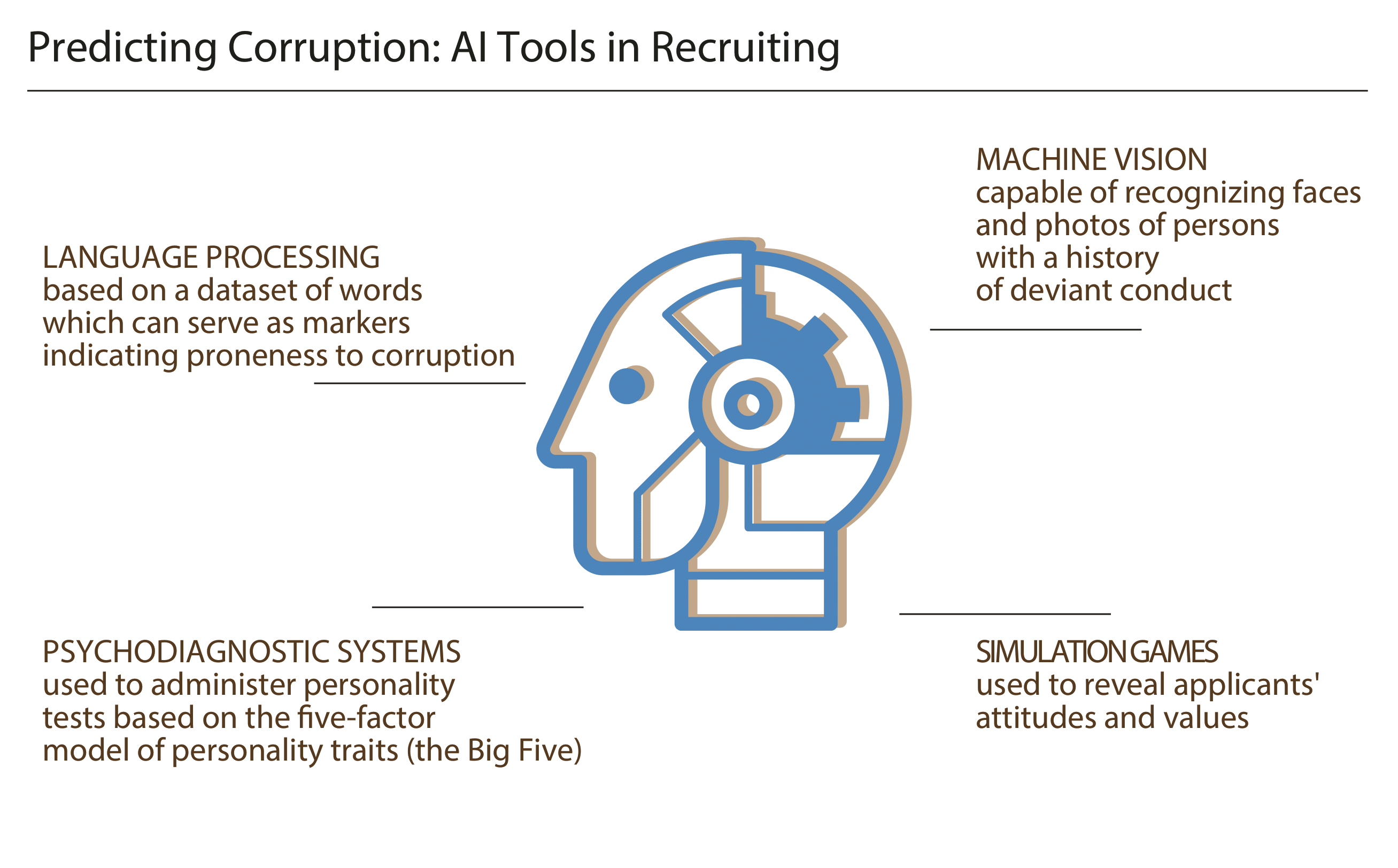 According to some psycholinguists, certain words and phrases in the Russian language, e.g. those equivalent to 'greasing someone's palm' etc. tend to be used more often by individuals inclined to corruption-related offences. Thus, a database of such marker terms can be used to identify high-risk candidates.

AI is also capable of facial recognition; for example, the self-learning neural network-based facial recognition algorithm developed by the Russian NtechLab makes it possible to find a single person in a multimillion-entry database by just one photo and thus can reliably alert a public or corporate employer to someone with a questionable past.

It's not all black and white, however. HR officers need to be trained in how to communicate with robots, the law on personal data protection has many blind spots, and there is a risk that instead of benefitting from the new technology, companies can end up in court if their AI recruiting tool happens to unintentionally discriminate against women, ethnic minorities, people with disabilities, or applicants over 40.

Frameups to suppress business competitors present a serious problem in Russia. Two institutions have been set up to deal with this corrupt practice: the Commissioner for Entrepreneurs' Rights (a.k.a. the Business Ombudsman) and a digital platform for accepting and processing related complaints.

Despite these measures, little progress has been made in addressing frameups – they are not currently recognised as a systemic problem but dealt with on a case-by-case basis.

AI can help bring these efforts to a systemic level and detect corruption in the law enforcement by using a distinct set of criteria, such as an unusually prompt initiation of a criminal case followed by an extremely slow-moving investigation and trial proceedings; this pattern may indicate a frameup.

Who Are the Judges?

Corruption in the judiciary is another major challenge. Its main contributing factor appears to be the wide discretion granted to investigators and judges by many Russian laws.

Such laws often define grounds for measures such as pre-trial detention or seizure of property in vague, abstract terms, leaving plenty of room for bribery and undermining public trust in the system. 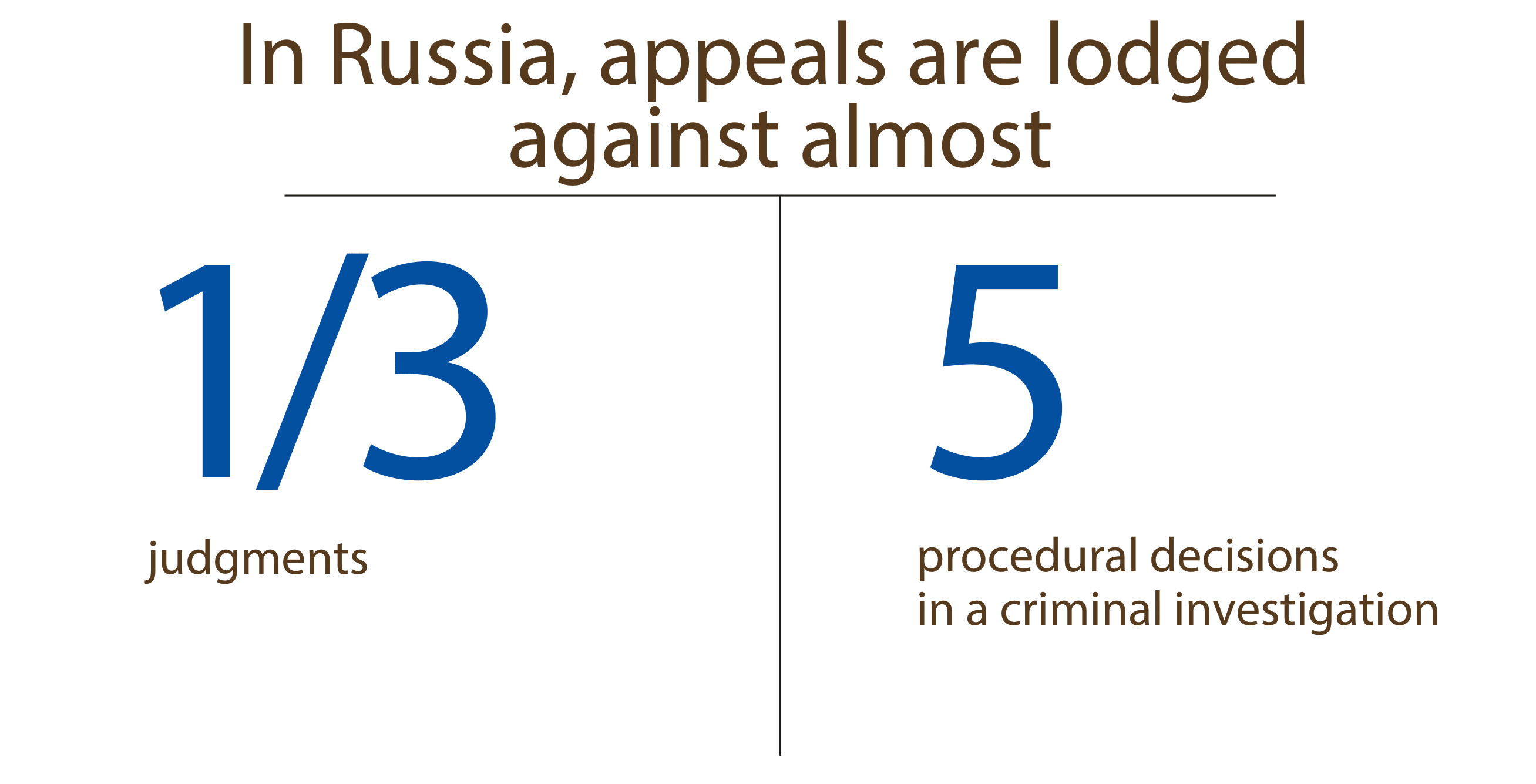 Court judgments make up a corpus of texts with a clear structure and wording, lending itself to AI-driven searches for certain terms and phrases.

Studies of potentially biased judgments reveal a pattern of procedural irregularities, such as a failure to give the defendant certain procedural guarantees under domestic law. The absence of key records on the file is also a warning signal which an AI-based tool can highlight.

In 2017, China adopted machine learning software to address these issues, with significant success. Within six months, they had launched the first version of their 206 System, a new AI-supported software based on data from China Judgments Online, the country's central database of legal documents.

In addition to discouraging corruption, the Chinese algorithm can assist judges in sentencing, and in assessing relevant factors such as mitigating or aggravating circumstances, the offender's personality, and others.

The power of this technology is based on its access to China Judgments Online which is the world's largest online legal repository with more than 80 million documents. Russia does not have a similarly extensive database, and creating it would require digitisation of numerous paper-based documents. 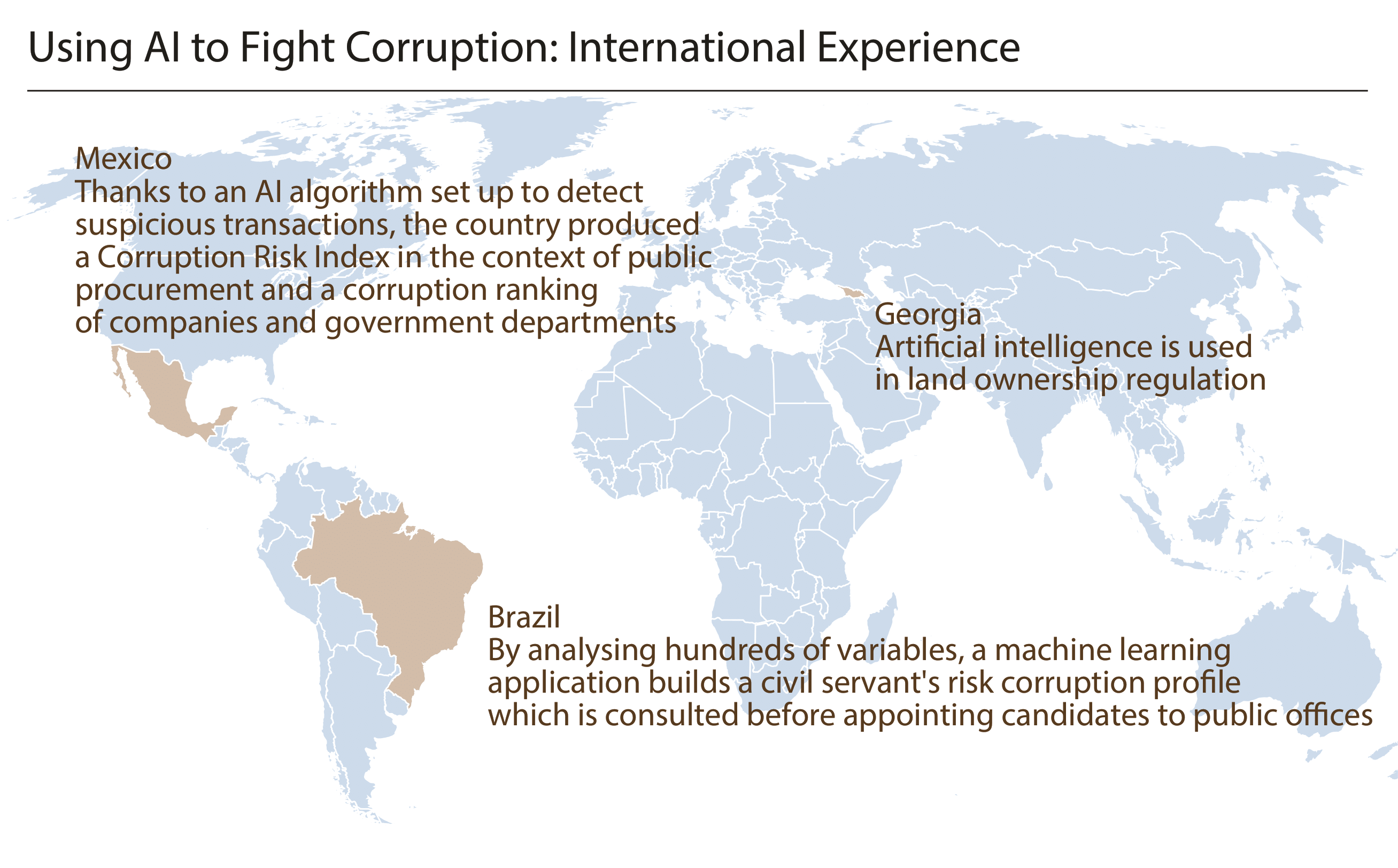 AI for State Control and Supervision

In the U.S. (Chicago, IL), almost 15,000 food establishments are monitored for compliance with food safety standards by just 30 inspectors who use predictions generated by a large-scale data based model to prioritise inspections by focusing on establishments at most risk for violations. Likewise, the Southern Nevada Health District uses data from Twitter to select food establishments for inspection. An AI application identifies Twitter users reporting food poisoning and generates a list of eateries for inspection. In one experiment, inspections based on a machine learning algorithm uncovered almost twice as many violations per inspection than those based on a random selection of venues.

In Russia, GIS TOR KND, a platform for automating government control and supervision, has been used to minimise corruption in this sphere. The system interacts with the Unified Register of Control (Supervisory) Functions ( ERKNM) to coordinate inspections with the prosecutorial authorities. The software ranks all supervised entities by risk level and maintains a record of inspections, thus reducing the human factor, i.e. the inspector's discretion in dealing with the supervised entities.

A data acquisition platform (GPSD) has been set up as a GIS TOR KND subsystem to enable remote observation of protected sites and environmental monitoring on the ground. An IoT technology facilitates real-time detection of irregularities which may then warrant an inspection. 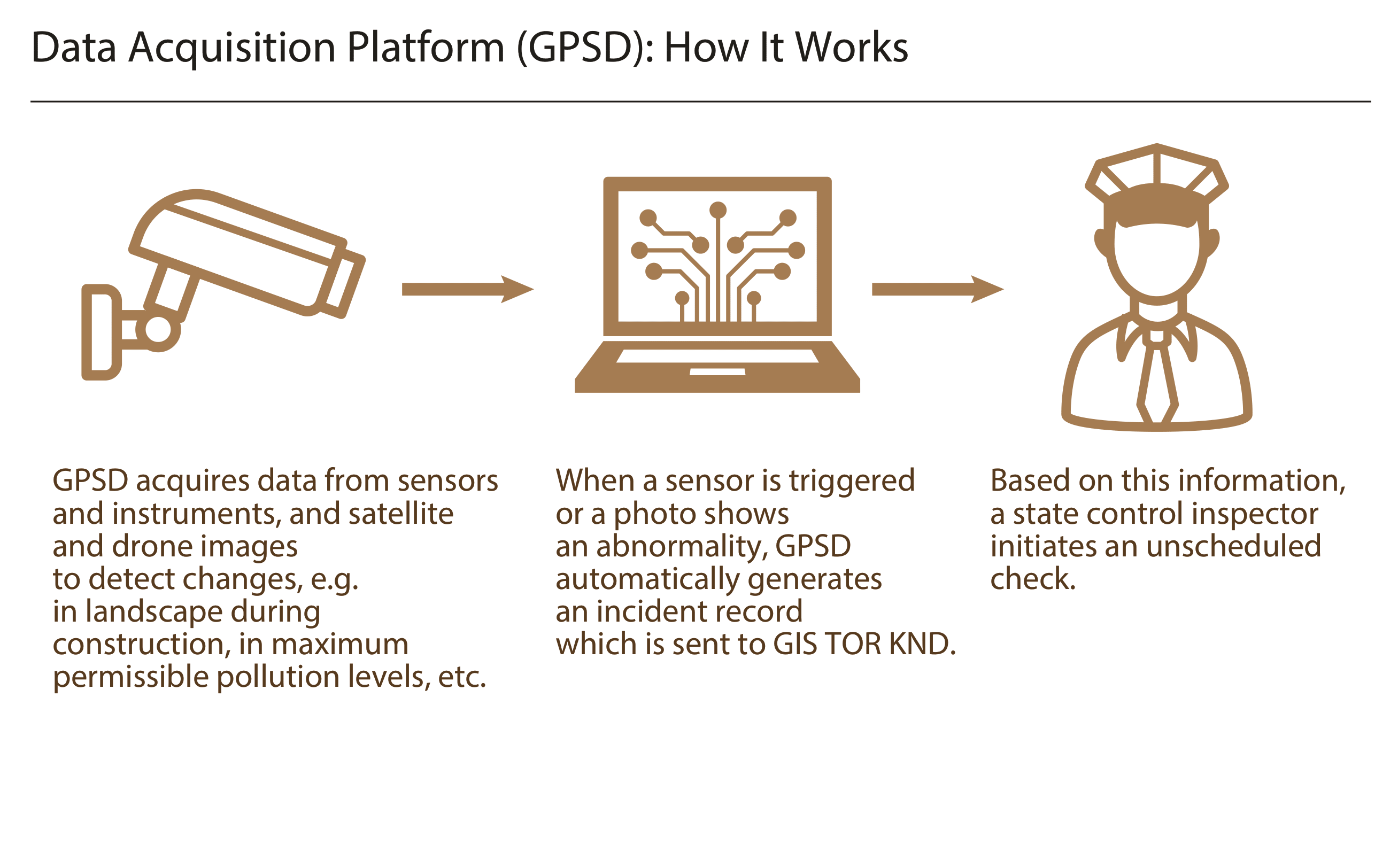 Russia adopts around a million legal acts each year. Since 2009, all proposed and existing legal acts are subject to anti-corruption review to detect ‘corruption-provoking’ provisions.

Reviewing a million acts a year is an enormous workload, and trained experts are in short supply and sometimes lack the technical competence. Once again, AI-based automation can provide a solution.

One of these models is now being created by the HSE Project Team in collaboration with the HSE LAP and the ILCL Department for Methodology of Combating Corruption. The Project Team is expected to create a dataset for training a model for anti-corruption expertise.

This will be a challenging endeavour, as indicated by a frustrated attempt to train the algorithm by using various authorities’ input available on the Federal Portal of Draft Normative Legal Acts. No usable texts were found, and only seven of the 3,000 dossiers of proposed legal acts contained reports of independent anti-corruption expertise.

China's Zero Trust system was one of the first large-scale experiments to use AI to detect corruption in the public sector. The system reviewed information from 150 restricted-access databases of government officials and from satellite photos, looking for signs of corruption such as an unexplained increase in income or savings or expensive purchases by civil servants or their family members. This information was checked against the details of central and municipal procurement contracts, and in suspicious cases, the system operator received a notification, triggering an audit of the official in question.

Its designers admitted that the technology was only capable of detecting signs of corruption without explaining the reasons behind this finding. Using AI-generated data in legal proceedings as direct evidence of guilt was also problematic.

In addition to this, public officials whose role is crucial in making such systems work are not always supportive, and very large volumes of data, while impressively demonstrating the power of AI, require sophisticated algorithms and can limit the transparency of data analysis. And finally, data processing and verification involve enormous labour costs and require access to highly qualified human resources, which are currently in short supply. 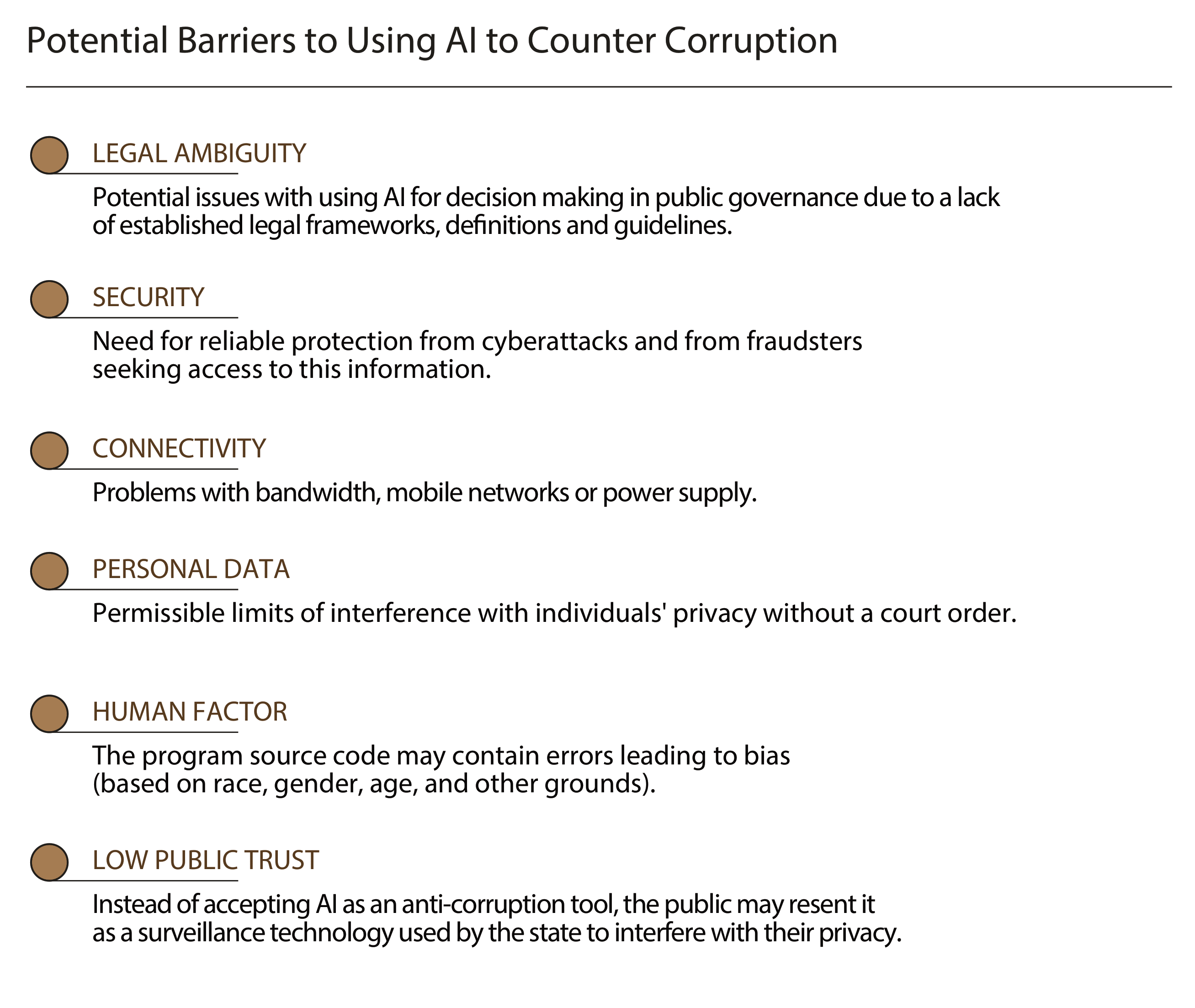 In summary, although the use of AI comes with challenges even in potentially promising areas, the possibilities are so immense that we need to begin planning for its large-scale implementation now.
IQ

Author: Svetlana Saltanova, May 17
All texts by
Law Long-read
Spotlight
Sociology
Interview
'We construct a portrait of Russian society'