How Manufacturers Provide Services and Why the State Needs It

If there are guided tours around a factory and the guides are full-time employees, then the factory is taking part in industrial tourism. This is quite rare, but it’s one of the many services that manufacturers provide in addition to their primary operations. Today, 88% of Russian manufacturing enterprises are engaged in servitization. Researchers from the HSE Centre for Industrial Policy Studies analysed what makes this practice useful for business and the country. At the XXIII Yasin (April) International Academic Conference they presented the results of their work, which was based on Russian and international statistics, evaluation of company performance, and interviews with their representatives.

Servitization takes place when an enterprise not only manufactures products, but creates, sells (including export) and outsources services. Services, which can be offered in a ‘bundle’ with the product, can be basic, aimed at improving its condition, or extended — to improve its capabilities. But the main thing is that this is not a burden, but rather an additional resource for development.

The level of servitization was calculated using the Ruslana Bureau Van Dijk database on a sample of almost 23,000 enterprises for 2011-2019. The following indicators were analysed: revenue, number of employees, cost of production, cost of fixed assets and exports. Two indicators were used to assess the effects of servitization: labour productivity and total factor productivity (TFP).

A successful manufacturer is someone who controls the product along the entire value chain (that is, at all stages of production and delivery to the consumer). The service market is developing so rapidly that the profit from services can significantly exceed the profit from the released product.

Let’s take the automotive industry as an example. The share of services in the offer of the Russian automotive industry - about 40% - is one of the highest in the processing segment. There are several dozen types of services, which can be both traditional (test drives, maintenance, training of car owners, insurance, etc.) and developed in the last decade (car sharing, long-term rental, electric vehicle charging, etc.) or just emerging (research on the creation of drones, carpooling, etc.).

In general, depending on the steps in the value chain, there are six types of services:

Post-production (in relation to adding value to the manufactured goods) 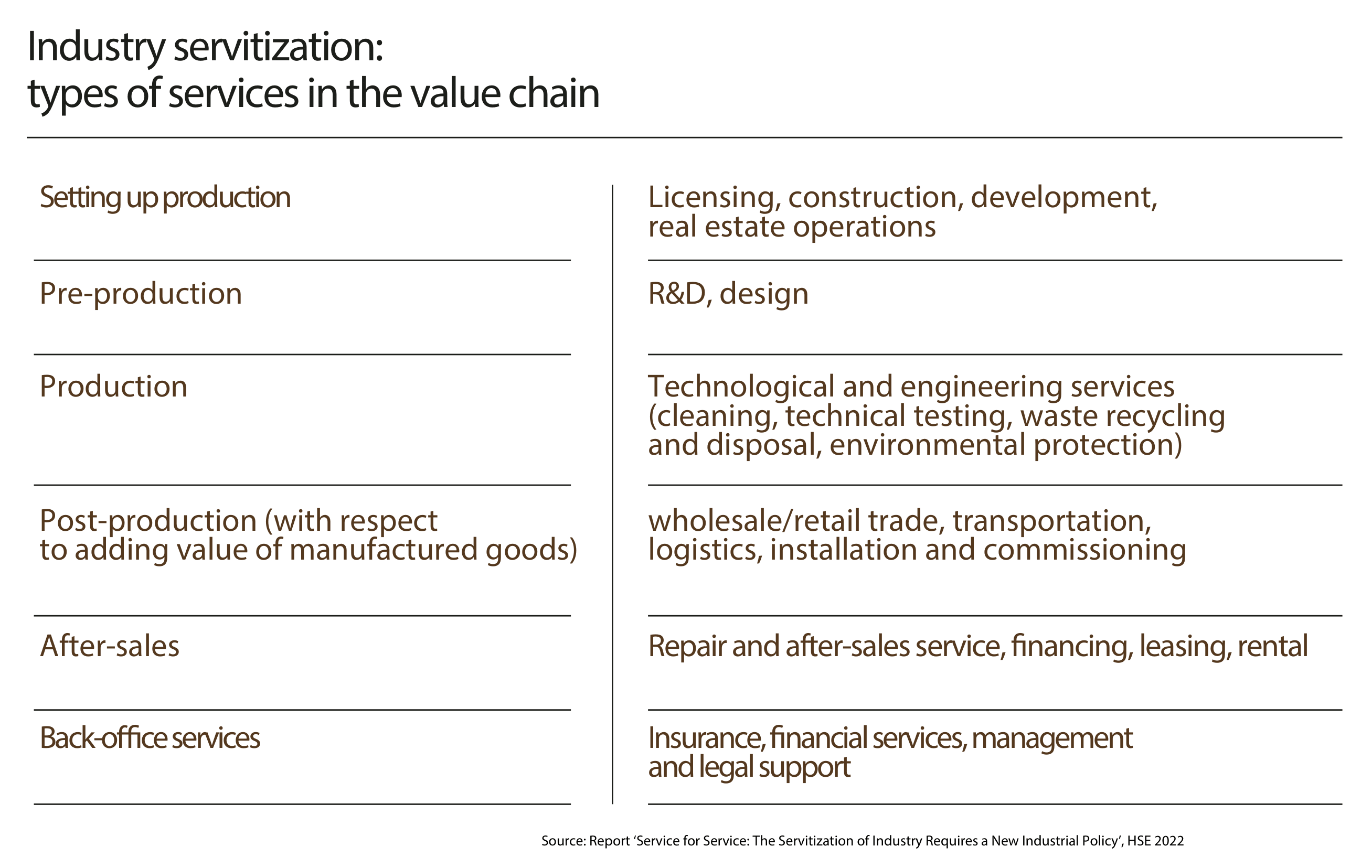 Servitization depends on the growth and efficiency (productivity) of the service sector. The latter's contribution to world value added in 1970 was 61%; in in 2019, it was 68%. Over the past half century, services have overtaken industry in all groups of countries in terms of growth dynamics. At the same time, developing economies demonstrated fast growth, and developed economies led the segment's share in GDP, which has been approximately 75%.

Russia managed to reach a trajectory similar to other countries only in the 2000s. For a long time, it was slowed down by the decline in real incomes of the population in the 1990s. The service sector was declining, and only in 2002 did it exceed the level of 1992.

Then the crisis of 2008-2009 happened and a slowdown began. One outcome has been that Romania has overtaken Russia in terms of value-added growth in this industry since 2011, and Hungary since 2018. 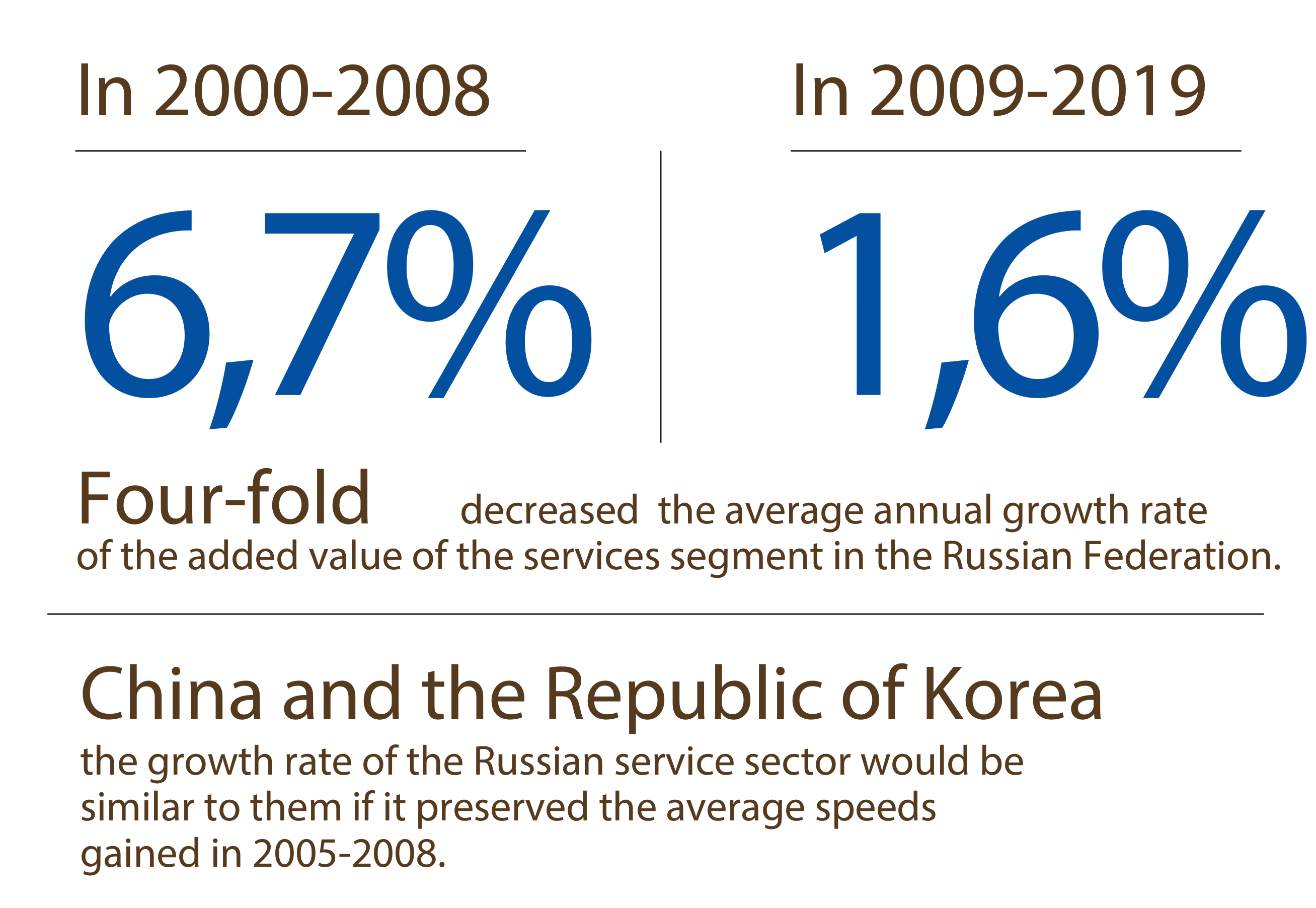 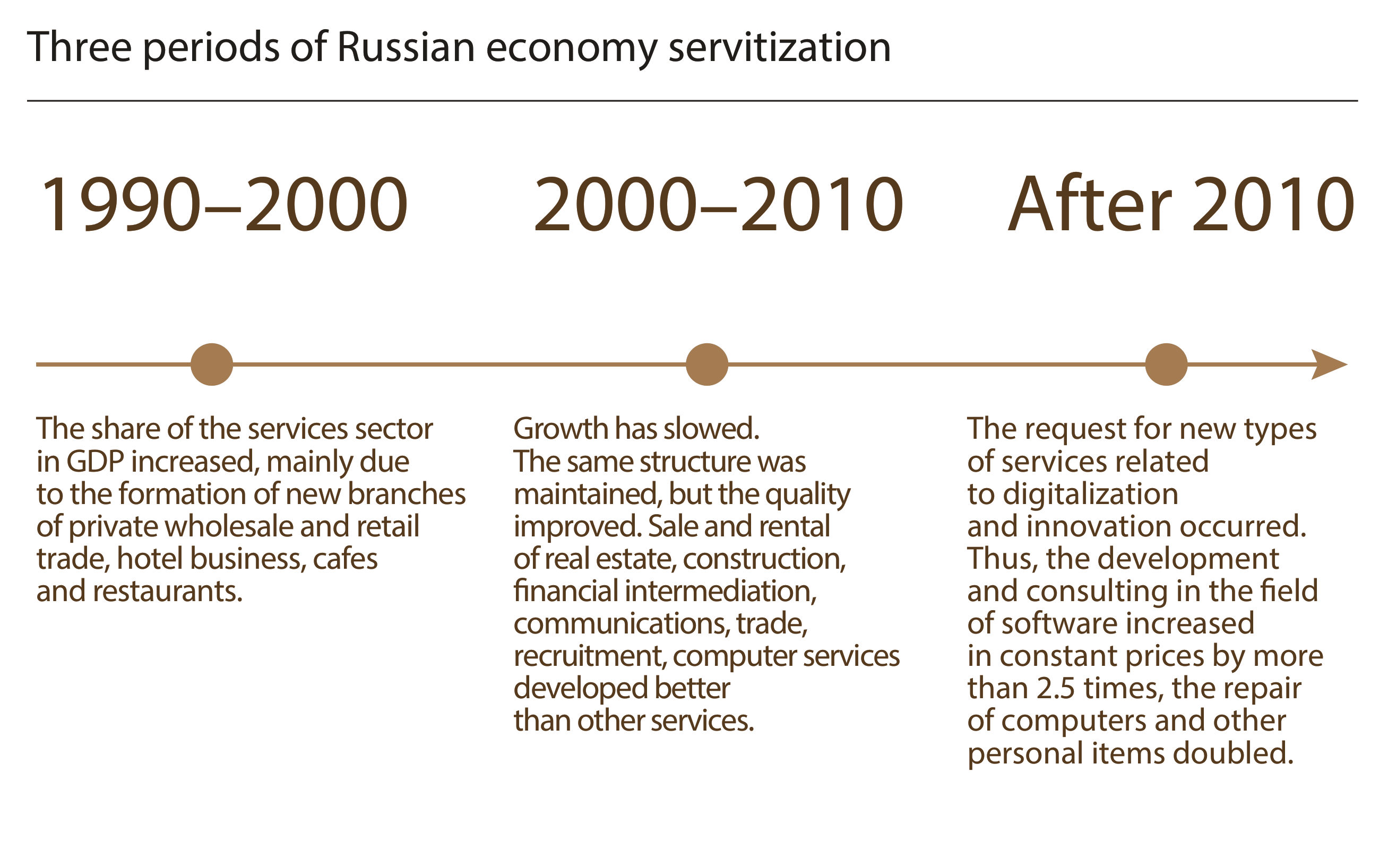 Most often manufacturing enterprises in Russia are engaged in wholesale and retail trade. 41.5% of companies are involved in it. Construction (13.3%) and real estate transactions (6.6%) follow with a large lag.

Together, these three types provide 60% of all services. Education, healthcare, financial and social services are the least popular (0.4–0.6%). 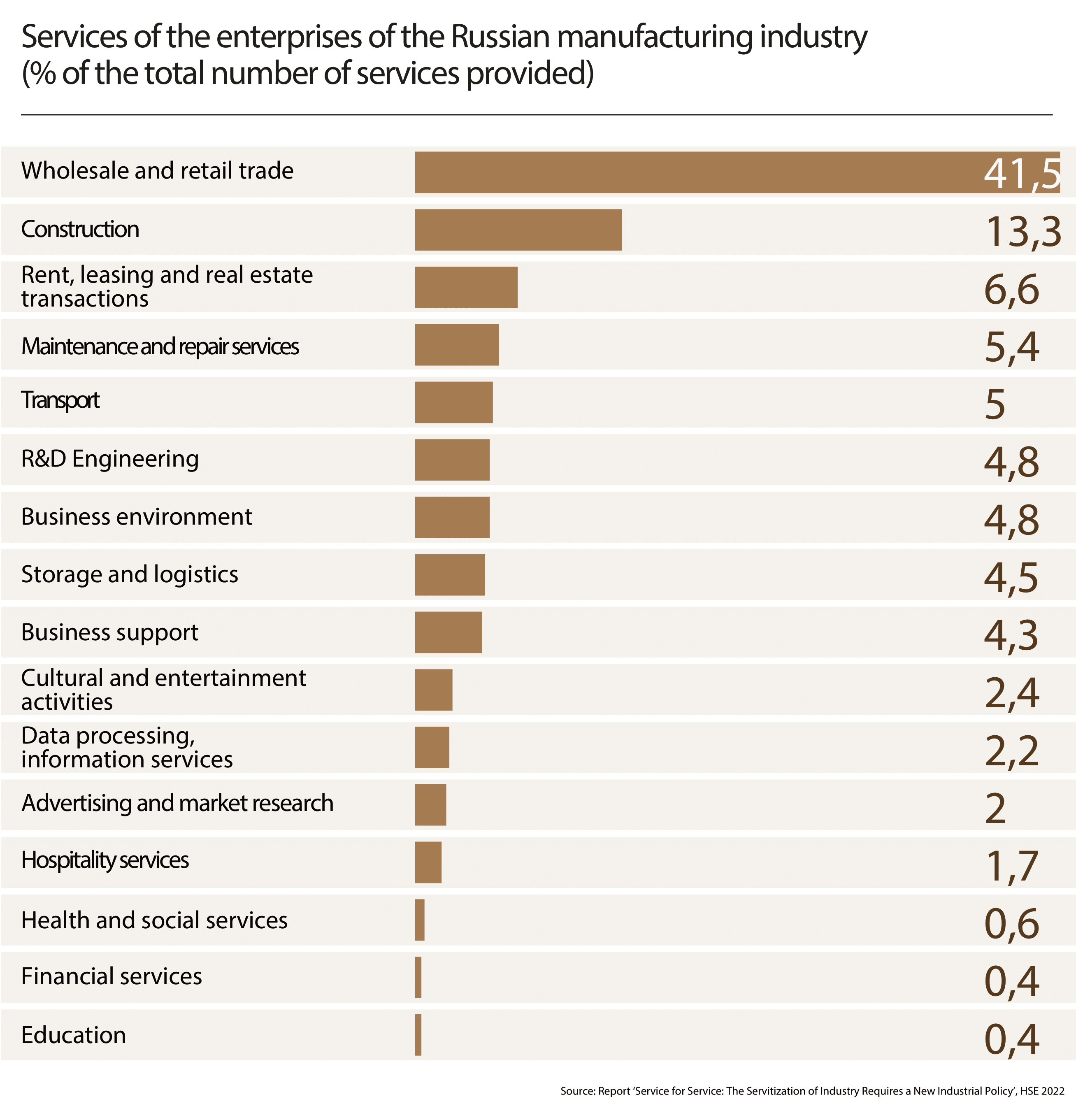 Servitization depends on the company size: the larger the company, the stronger the effect. The most significant differences are observed in back-office services — they are more often provided by large companies (by 16.4% compared to small ones), in production (by 13.5%) and production establishing services (by 9.8%).

There are more service-oriented industrial organizations in regions with high urban populations and developed creative economies. This is especially relevant for intensively service-oriented companies, that is, with services at several stages of the value chain.

Along with the additional number of areas in which the company provides services, its productivity increases. The largest increase is demonstrated by enterprises engaged in five or all six types at once.

The more links in the chain are covered, the higher the probability of exporting. In foreign markets, it is necessary to actively solve the problems of adapting their own products, meeting the requirements of foreign partners, so it’s obvious that exporters are ahead of those working in Russia in almost all types of services. They often provide production (engineering, environment), pre-production (R&D, design) and post-production (trade, transport, storage and logistics) services.

Companies with foreign participation are more likely to export products. Focusing on the interests of consumers, they also offer post-production services more often. 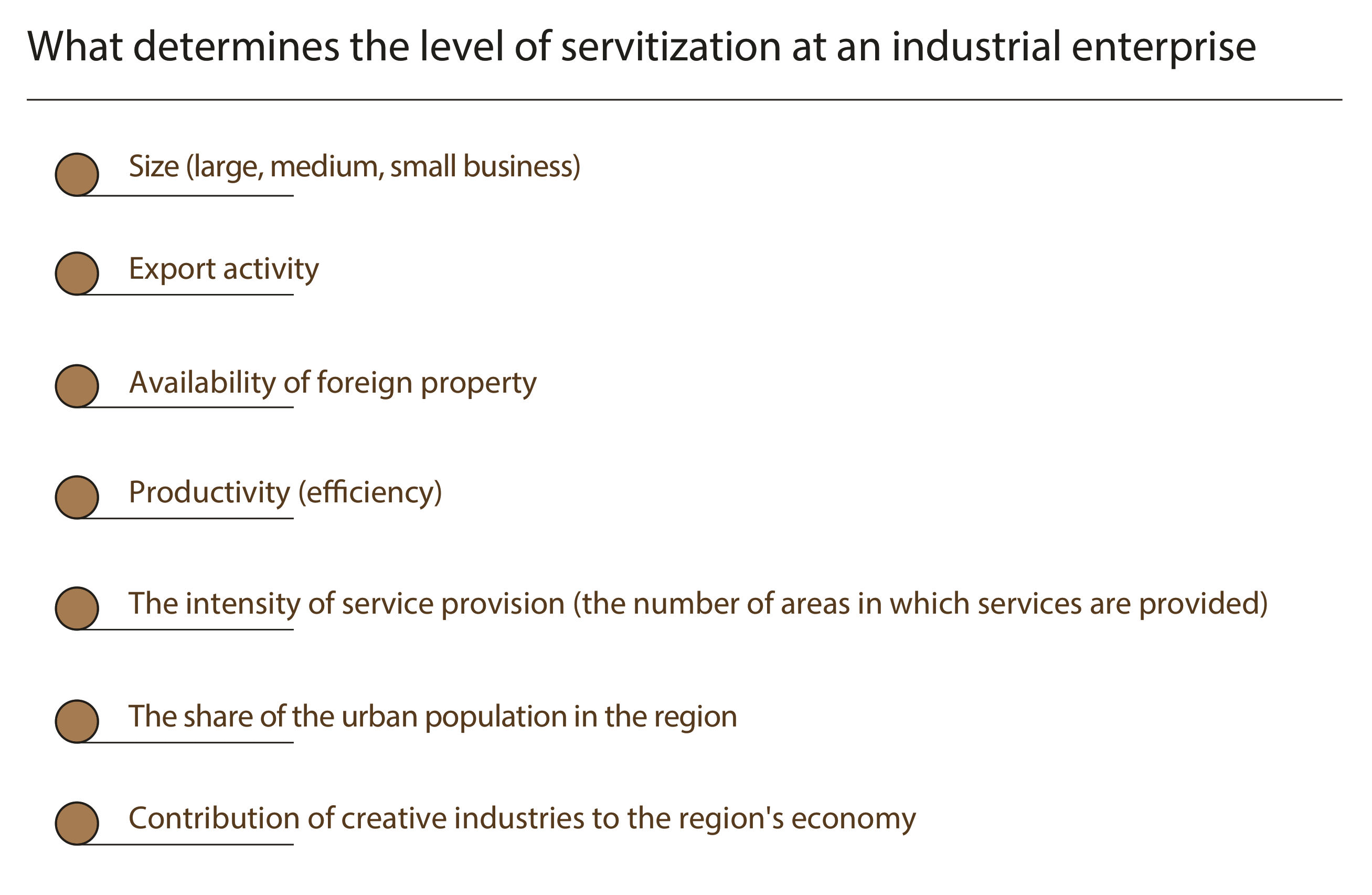 In addition, the processes of industrial servitization in different countries differ in the sources of services — domestic or foreign. In developed countries, due to a large number of services in the global value chains, dependence on domestic offers is decreasing — they are being replaced by foreign ones. Thus, in 2005-2018, in France and Germany, the index of service-oriented sovereignty (ISS) fell from 70% to 62%, in the UK — from 70% to 63%.

The indexes were developed by the report authors and calculated on the basis of TiVA OECD data.

The ratio of changes in the two indexes ‘can be interpreted, if not as evidence of import substitution of services entering the country, then at least as a gradual decrease in the dependence of Russian industry on the services sector of foreign partners,’ say the experts.

By 2019, the lowest level of sovereignty (and the greatest dependence on imported services) in manufacturing industries of the Russian Federation was noted in the production of computers, transport, electronic and electrical equipment. The highest level was in ‘Chemicals and non-metallic mineral products’ and ‘Food, beverages and tobacco’. 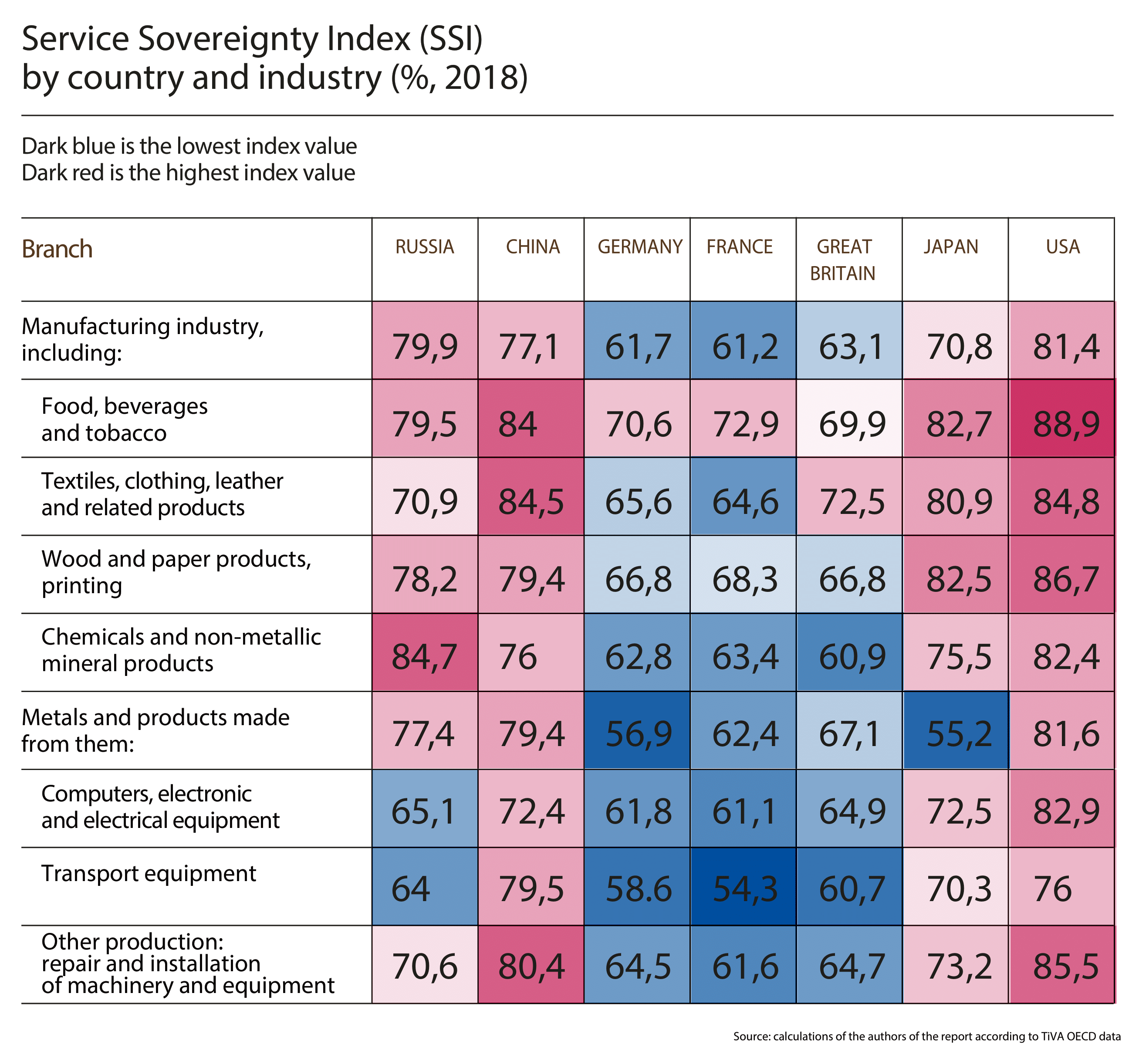 Attention to the alternatives

Servitization became trend in the late 1980s. Since then, interest in it has grown, mainly in business literature and academic works on management, but not among economists and those promoting state regulation.

Meanwhile, the authors of the report note that servitization changes company business models and rebuilds global value chains, which means it strengthens the competitive advantages of individual enterprises and the whole country.

This creates a new vector of industrial policy. Its export-oriented model (when the priority is launching companies to foreign markets) in the current conditions of global conflicts and restrictions in international trade becomes ineffective, and servitization turns into an ‘alternative marker’.

Together with Russia's integration into global production, the question of how and to what extent its industry is service-oriented in order to be competitive comes to the forefront.

The results of the HSE study confirm the conclusion. It showed that companies with a wide range of services (from five in the value chain) are:

have more chances to become exporters.

However, thus far, attention to the alternative leaves much to be desired. There are no signs that regulation is shifting towards encouraging servitization. The term itself is rarely used in strategic documents, and the state policy regarding industrial production is separated from the policy regarding the services segment.
IQ

Author: Svetlana Saltanova, May 23
All texts by
Economics Long-read
Spotlight
Psychology
Research
People Do Not See Spelling Mistakes as a Sign of Limited Intellect