Reasons why volunteers keep coming back

Problem: Volunteering is often perceived as something done on a regular basis. However, many people only volunteer once, and some people, having volunteered once, continue doing it every now and then. They are called occasional volunteers, event volunteers, or episodic volunteers (EVs).

Solution: Individuals will be willing to repeat a volunteering experience when they are satisfied with their first-time participation. Being tasked with an interesting job, socialising and feeling part of a team can motivate people to continue volunteering for projects that benefit society.

HSE researchers together with colleagues from Erasmus University in Rotterdam, the Netherlands, and the University of Pennsylvania, Philadelphia, USA, examined the determinants of episodic volunteer satisfaction and its impact on the motivation to continue volunteering.

Based on a 2018 survey of 2494 episodic volunteers in Russia, the study suggests that to keep volunteers coming back, organisations should focus on volunteer motivation and satisfaction.

Volunteers need to feel valued, to have the opportunity to learn new things, and to be accepted as part of a team. A satisfying early experience increases the likelihood of volunteering again in the future. The paper is published in Monitoring of Public Opinion: Economic and Social Changes.

In recent years, researchers have observed a change in volunteer engagement patterns.

The first observed trend is a shift from long-term, regular volunteering towards short-term engagement in a single activity or event.

The second trend is for volunteers to pick and choose certain projects or events rather than being attached to an organisation.

The third trend is about the individual versus the collective: instead of being committed to an organisation and its cause, volunteers are often driven by their own individual goals and motives.

'For an organisation seeking to attract volunteers, it is no longer sufficient to pursue a worthy cause; they need to prove that they can do it effectively', the researchers note.

Occasional, or episodic volunteers (EVs) are different from regular volunteers. While the latter are usually involved with an organisation over a long period of time, occasional volunteers can contribute from time to time, mainly by performing relatively simple tasks during high-intensity, large-scale events. 'They can help e.g. during festivals, sports events and marathons, fundraisers, cultural, educational or environmental activities', the authors explain.

Such occasional volunteers do not usually sit on the organisation's board, nor do they participate in regular meetings or mentoring programmes. Most EVs are young people, students or corporate volunteers.

The relative proportion of episodic volunteers has increased worldwide. It is estimated at 40% or more in the U.S. The situation in other countries is similar, with 38% to 69% in Australia, 50% to 59% in Canada, and 44% to 78% in the U.K. In Russia, about 58% of all volunteers can be described as EV.

The share of Russians volunteering for non-profit organisations is consistently low at 2% to 11% of the general population, according to polls.

Earlier studies reveal a positive relationship between volunteer satisfaction and intention to continue participating. The authors of the current paper stress the importance of organisation-related factors for episodic volunteers. ‘The circumstances of episodic volunteer involvement are different from those of regular, long-term volunteering. Episodic volunteering has a narrow focus in terms of time and content, and volunteers' interaction with the organisation and its beneficiaries is limited', the researchers explain.

How an event is organised has a significant impact on episodic volunteer satisfaction: if an event is poorly organised, volunteers may never come back.

Studies done in Russia have largely focused on the characteristics of volunteers. Aspects such as volunteer management and event organisation and their effect on volunteers' intention to continue volunteering have barely been addressed. Similarly, relatively few papers have focused specifically on episodic volunteering. This current study is the first to focus specifically on episodic volunteers, to explore the impact of their satisfaction on future participation, and to highlight the role of different factors in volunteer satisfaction.

The study uses data from the Russian segment of an international comparative study of episodic volunteering, conducted at the initiative of the University of Pennsylvania, USA, and the Rotterdam School of Management, Erasmus University of Rotterdam, the Netherlands, between 2018 and 2019 in 22 countries using a uniform questionnaire.

In Russia, 2494 episodic volunteers were surveyed. The survey questionnaire was adapted by the paper's authors in collaboration with researchers of the HSE Centre for Studies of Civil Society and the Nonprofit Sector.

An online survey was used for data collection. The respondents indicated that they had volunteered occasionally for events and were not regular volunteers for any organisation.

The researchers identified several factors that could determine a volunteer’s satisfaction with their experience of episodic volunteering, namely:

how volunteer engagement is managed (training, whether volunteers can ask questions or make requests, types of rewards);

belonging to a team (acceptance by the organisation's employees, regular volunteers, other episodic volunteers, beneficiaries or clients). 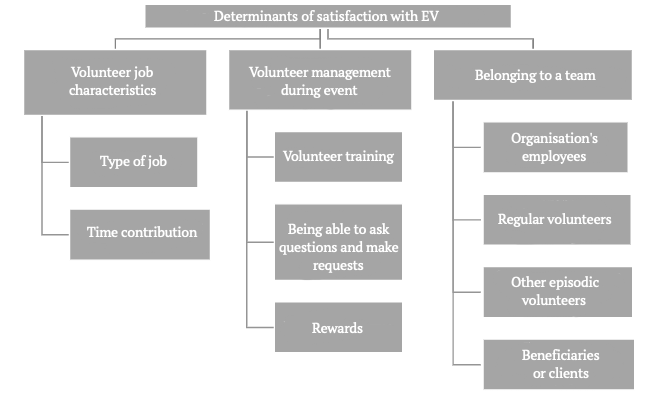 The study produced a profile of episodic volunteers in Russia. According to the authors, 'episodic volunteers tend to be women rather than men (76% versus 24%), aged a little over 30, with higher (57%) or incomplete higher (14%) education, earning an average income and living in big cities with a population of 1 million or more (41%)'. By occupation, Russian EVs tend to be specialists (28%), students (26%), and people in managerial positions.

As for the types of events supported by EVs, 24% concern the spheres of culture, art and leisure, 18% are sports events, 18% are conferences, seminars and round tables, 18% are environmental events, and 16% are fundraisers.

The main motives of episodic volunteers include an interest in the activity (58%), emotional satisfaction (49%) and meeting new people (36%), while a quarter of respondents (26%) believe volunteering to be their duty as citizens. Episodic volunteers are also likely to donate to charity: three-quarters report having contributed money to a charity over the previous year.

As for the main research question, the study confirms that satisfaction plays a key role in episodic volunteers' intention to continue volunteering. Factors contributing most to the overall satisfaction are the quality of volunteer management and perceived belonging to a team.

Also important is the type of job: the more interesting, the higher the satisfaction. 'Volunteers trusted with high-responsibility tasks as part of organising an event or interacting with visitors or beneficiaries are more likely to be satisfied with their experience. In contrast, those tasked with cleaning, for instance, are less likely to be satisfied', the authors comment.

The findings do not suggest a correlation between satisfaction and socio-demographic characteristics of episodic volunteers – probably because the factor of job content prevails, all other things being equal.

So an organisation needs to keep a range of factors in mind when trying to recruit episodic volunteers for an event. 'In a sense, episodic volunteers participate in an event as its users, rather than providers of services, as is the case with regular volunteers. In this context, a well-organised event adds value by keeping episodic volunteers comfortable and satisfied and encouraging their future participation. This generally confirms the findings from studies done in other countries', the researchers comment.

At the same time, episodic volunteers are not fundamentally different from regular long-term volunteers in terms of factors contributing to their satisfaction: those who volunteer occasionally want just as much to be part of the team and to feel that they are making a meaningful contribution to a common cause.

'Rather than being a separate type of volunteers, episodic volunteers may represent a new form of engagement', note the authors, who believe that the role of EVs should not be reduced to a certain function at an event. An organisation wishing to keep volunteers coming back should focus both on managing their participation and on making them feel a sense of belonging and acceptance by the core team.

Why Is This Important?

Consistent with the findings from recent international research on the topic, this study confirms that recognition is an essential element in managing episodic volunteers.

‘Given the high interest in volunteering, with volunteers' combined efforts estimated as the equivalent of 109 million full-time workers annually, studying episodic volunteers and reasons why they continue to participate, rather than leave after their first experience, has relevance both for academic researchers and for practitioners in non-profit and voluntary organizations', the authors conclude. Findings from such studies can be helpful in building effective communication between non-profit organisations and potential volunteers.
IQ