The Russian Cities that Suffer from the Highest HIV Mortality Rates

In Russia today, HIV infection rates have stabilized, but mortality rates in a number of Russian regions have increased. Most affected by the disease are cities in the Middle Volga region, the Urals, Western Siberia and the Baikal region. In these areas, the number of HIV deaths exceeds the national average, and the disease is gradually spreading from the cities to more rural areas, according to HSE demographers Aleksei Shchur and Sergey Timonin at the XX April International Research Conference.

The Losses in Numbers

Since the mid-2000s, life expectancy in Russia has been steadily increasing. This has mostly resulted from a decrease in deaths related to heart disease (strokes and coronary artery disease) and unnatural causes (murder, suicide, alcohol poisoning and car accidents). At the same time, deaths caused by the human immunodeficiency virus have been increasing. The average death rate from the disease – the annual number of deaths per 100,000 people – has increased since 2004 by more than 20%. HIV’s role in early death rates has also increased.

One out of every ten Russians who died between the ages of 25 and 44 in 2017 was killed by the virus. By Shchur and Timonin’s estimates, in cities with higher infection rates, this number was higher than the national average by two to five times.

On average, deaths from HIV constitute 1% of deaths in Russia across all age groups, but in the most disadvantaged cities, they constitute 3.5-5%.

According to experts, the situation has become more stable in terms of the disease itself. There have been no sharp upticks in infections. Last year, there were 59 new cases of HIV per 100,000 people, which is higher than 2017 by 1.8% (new HIV case estimates are provided by Rosstat, Rospotrebnadzor, and the Ministry of Health of Russia; though their data contain inconsistencies, the differences are not significant).

In terms of mortality rates, however, the situation is much direr and does not show signs of improving. Some experts believe that the rapid increase of HIV deaths partly stems from the peculiarities of how causes of death of recorded in Russia. Almost all deaths caused by a combination of tuberculosis and HIV are recorded as deaths caused by HIV. HIV is recorded as the cause of death even in instances when no significant reduction in immunity due to the virus was detected.

But a high mortality rate may also point to insufficient access to antiretroviral therapy (or ART, which involves taking 3-4 medications regularly for life). Not all cities have sufficient quantities of the drugs needed for this treatment (though in the two capitals, Moscow and St. Petersburg, of course, this is not as big of a problem).

The drugs not only help achieve remission and extend life expectancy, but also significantly block the spread of the virus. It has been proven that patients undergoing ART are less likely to transmit the disease to others (for example, women with the virus can give birth to HIV-free children).

Areas with the highest HIV mortality rates are industrial cities located in the Kemerovo, Orenburg, Sverdlovsk, Ulyanovsk, Irkutsk and Samara regions, as well as the Perm region.

HIV Mortality Rates in Russia 2017:
Proximity to the Kazakhstan border as a ‘risk factor» 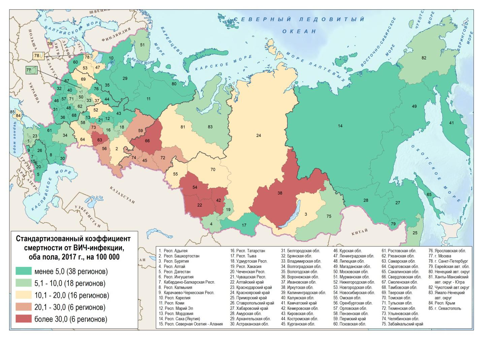 Regions with the highest HIV mortality rates are among the epicenters of the epidemic, the researchers note. These include the Middle Volga region, the Urals, Western Siberia and the Baikal region. These regions have a lot in common: firstly, they have cities with high population density (many of which are some of Russia’s largest cities), they are located near the southern border and they share transport routes with Kazakhstan, which run through Central Asia. This data on the most affected areas is confirmed by other experts.

The geography of the disease can be explained by another social problem—the use of intravenous drugs. According to Anna Popova, Chief Public Health Officer of Russia, these regions and a number of others were located on drug trafficking routes in the 1990s. ‘The majority of HIV cases resulted from dirty needle sharing. There has been a resurgence of this. It is no coincidence that the main carriers of HIV are people aged 30-45.’

This data corroborates figures from the UN: in the early 2000s, up to 90% of all opiates entering Russia came from Afghanistan via Central Asia and Kazakhstan.

In the most affected areas, the spread of HIV was preceded by the heroin epidemic of the late 1990s-early 2000s. These regions’ proximity to the opiate trafficking routes and their large share of potential drug users in turn caused the epidemic to intensify.

At the same time, groups who are at risk continue to increase and ways of contracting the disease continue to vary. But the scale of the problem for society is not yet clear.

It is cities – which have high concentrations of people and serve as the logistical hubs for surrounding areas – that are the main foci of the epidemic. However, the disease then spreads from these points to other areas. HIV mortality rates are gradually increasing in rural areas.

In many regions, large cities have the highest HIV mortality rates. It is possible that this is caused by migration. People who are HIV-positive relocate to the largest cities of their regions.

Behind the largest cities, smaller cities are also seeing a rise in HIV mortality rates in these regions.

With some time (two-four years), the increase in mortality rates affects the rural population. However, deaths caused by HIV are still lower in these areas than in the cities.

The Case of the Volga Region

The increase of HIV-related deaths in the Samara and Ulyanovsk regions (the Middle Volga region) in 2009-2017 is most revealing. The causes, evidently, are connected with that very drug trafficking, Sergey Timonin notes. Initially, during the late 2000s and early 2010s, the epicenters of the epidemic were Tolyatti, Dmitrograd and their surrounding areas, which came to form a unified whole despite their being located on opposite sides of an administrative border.

In the next phase of the epidemic, in 2012-2014, the epicenter expanded to fully incorporate the main urban cores of both regions (the Samaro-Tolyatti agglomeration, Ulyanovsk and the left bank of the Ulyanovsk region). And finally, in 2015-2017, it had almost encompassed the two regions in their entirety. Nonetheless, the highest mortality rates caused by HIV continue to be in the cities, and the situation is not improving.

Cities’ role as epicenters of the epidemic is characteristic of the world as a whole. HIV affects a wide range of countries, including highly developed ones.

In the United States, which had an HIV epidemic from the mid-1980s to the mid-1990s, it was the large coastal cities—New York, Boston, Baltimore, and Washington on the East Coast, and San Francisco and Seattle on the West Coast—that became hotbeds of the disease. But the widespread use of highly active antiretroviral therapy (HAART), which began in the United States in 1996, dramatically reduced the death rate from HIV in the country—by 70% in 5 years, the authors point out.

Spain, which experienced a surge in HIV-related deaths at about the same time as the US, is a similar example.

‘The course which Russia is taking at the moment is the same as that of these two countries before they began to reverse their rates of HIV mortalities,’ the researchers state. ‘And the key to these countries’ success is not a secret—they provided HIV patients with comprehensive HAART treatment.’ It remains for Russia to implement these ready-made solutions and ‘give serious attention to regions highly affected by the disease and consider these regions’ role in the HIV epidemic,’ the authors conclude.