Is Tsvetaeva Really to Blame?

How a publisher fell for a fake, and what came of it

Sometimes, minor errors take on major importance and actuallyinfluence how we perceive literaryclassics. A new collection of verse by Marina Tsvetaeva from Azbuka publishers provides a perfect example of this. The cover bears a photo of another woman that was taken from the Internet. Svetlana Saltanova, IQ.HSE portal editor and author of a book on Tsvetaeva, explains how the ‘fake’ came to be, and why readers no longer recognize or understand the real poet.

The girl with the collar

In 2008, someone with the pseudonym of ‘Piony’ posted a ‘new contribution to the community of look-alikes’ on LiveJournal. It consisted of a series of photos of famous people, each paired to a famous look-alike. Some matches look stunningly natural, whereas others are more the product of Piony’s imagination. Some of the liknesses Piony has paired include:  Muslim Magomayev – Iosif Kobzon, Nadezhda Mandelstam – Boris Pasternak, Galina Volchek – Valeria Novodvorskaya. The full list is impressive, but only the author knows whether it was all intended as a joke.

The next installment in the series was the most tantalizing: Piony found a double for…herself. Her look-alike turned out to be Marina Tsvetaeva. On her LiveJournal page, Piony posted a photo of the poet taken in Paris in 1925, and alongside, a likeness of a woman wearing a 1970s-era collar.

Tracking Piony’s trail through social networks quickly led to her real identity. Her name is Yelena Yerykhova. She graduated from Leningrad’s School No. 263 in 1970, from its Math and Physics Lyceum No. 293 in 1972, and then from St. Petersburg University. Her married name is Yelena Kerzner and she now lives in Houston, Texas, USA.

This would ordinarily mark the end of the story, but it is, in fact, only the beginning.

Now, anyone searching online for a photo of Marina Tsvetaeva is increasingly likely to find a photo of Piony instead. This is no fault of the twin-loving Mrs. Kerzner. What’s done is done. But what started as a molehill has since grown into a mountain.

Now, the false portrait of the poet has leapt beyond the confines of the Internet to make its way into print. The fake Tsvetaeva appeared on the pages of the book ‘Ariadna Efron: The Unknown Tsvetaeva. Recollections of a Daughter’ released by Algorithm publishers in 2012, in the documentary film ‘Marina Tsvetaeva: The Last Journal’ that aired on the Culture channel, and on a memorial plaque to the poet erected in Samara in 2016.

The Samara incident made waves. Passions flared on social networks, activists sounded the alarm and officials promised to investigate. The local administration wrote to Moscow and received an expert opinion from the Marina Tsvetaeva Home & Museum. The city put up a new plaque a few months later, this time with the correct picture – but still showing an incorrect passage from one of Tsvetaeva’s poems. It seems you can’t have everything…

Then, in 2017, Marina Tsvetaeva’s ‘twin’ showed up again — this time in a commercial on the Culture channel announcing the 125th anniversary of the poet’s birth. And most recently, Azbuka publishers printed 3,000 copies of ‘Love is flesh and blood’, a selection of Tsvetaeva’s poems with a youthful photo of Yerykhova on the cover. 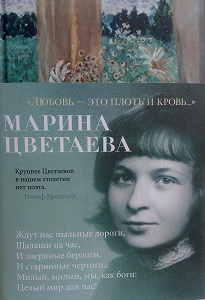 The cover of ‘Love is Flesh and Blood…’

The viruses of modern times

The girl with the collar has become part of history without having done anything to earn the honor. And the story of the relationship between the classics and modernity has been updated with a bizarre twist.

The situation with the case of mistaken identity seemed a fluke at first. But that fluke has reoccurred so consistently as to suggest a trend.

The memorial plaque in Samara was a labor of love, and the local school students, parents and teachers who organized it could hardly be accused of indifference. From start to finish, they pursued entirely worthy motives.

Philologists and artists published the book with the wrong photo on the cover. Were they unprofessional? Hardly.

Then what is going on here? The great ones who have departed offer a measure of any society. But an incorrect attitude towards the person and the legacy of those geniuses speaks less about them than it does about the shortcomings of those still living.

One of the ills attributed to today’s ‘digital’ society is its inability to work with information properly, to apprehend it sufficiently, evaluate it critically against alternative sources, and to distinguish the real from the fake. Scholars refer to this skill as ‘media literacy.’ According to sociologists, 26% of Russians have low media literacy, 44% have medium, and 30% rank highly in the skill. The Communications Ministry considers this a positive sign: scholars, however, see no reason for rejoicing.

Still, the problem is not in the numbers themselves, but in their consequences. Thanks to the Internet, we are awash in a sea of information. We surf, literally, along the surface, with little inclination or time to delve deeper. It is always easier and more comfortable to stay with the familiar. At least, that is, until we begin generating information ourselves or must take responsibility for our words and actions. But perhaps we never reach that point, in which case we suffer from the other great ‘virus’ of modern society – a lack of authenticity.

Due either to thoughtlessness, incompetence or oversight, the virus spreads at the speed of lightning. At this point, the adventures of the ‘girl in the collar’ might elicit a harmless smile, but who’s to say whether in X number of years, after repeated appearances in popular publications and national TV programs, Tsvetaeva’s fans won’t end up reciting her verses to the image of her twin?

There are different types of fakes. Using the wrong image is one thing, but ‘ideological’ errors that cast people in a bad light take hold and spread just as easily.

Popular names are good for boosting media ratings. Creating a buzz, hype, likes, and increasing the number of subscribers or followers — all that matters is the result, the truth be damned. Names from the past are twice as good: the dead will not take you to court or challenge your lies.

Tsvetaeva is the perfect example: the exceptional openness and sincerity of her writings makes her an especially tempting target for attack (‘Whatever happens to me will happen – and that is what I will write about.’) And this is fraught both in her life and in her death.

For those who hunt for hype, there is plenty to wallow in with regard to Marina Tsvetaeva: questions of motherhood, personal life, her departure from Russia and suicide…The Internet is overflowing with all of it, and what any one person focuses on depends on whether their goal is to denigrate or deify the poet.

‘How Tsvetaeva killed her daughter and was poisoned by her son,’ ‘The shocking story of the heartless mother and poet’— such things are constantly shared and reprinted, along the way picking up comments expressing various degrees of hostility (accusations, curses, and refusals to read ‘the good poetry of a bad person’).

You could dismiss the Internet as a global trash heap and declare that you will not ‘descend to that level out of principle.’ But whether we want it or not, that is where public opinion and the informational agenda is largely formed—and especially for the youth. Thus, the virus spreads ever further and faster — by TV, that 69% of Russians watch every day, and by Internet, that 60% use daily.

In March 2019, Channel One launched the ‘Living Life’ program devoted to Marina Tsvetaeva. The result was unprecedented: never before had there been such a mass audience sitting in judgment. Terrible mother, bad wife — journalists expressed their opinions of her freely. But the question is: From where did they get their information, if it took experts from the Tsvetaeva Museum more than two hours to list all of the factual errors the program contained? Note that this is not a call to wax poetic about her difficult fate, but a desire to mount a line-by-line rebuttal of all the untruths on which the program based its information.

Exactly one century ago, in 1919, Marina Tsvetaeva penned her famous line: ‘You, in one hundred years’ as an appeal to that person who would come and hear. And she cinched it with these words: ‘The verses are written — that person will appear.’

It is now 100 years later, and we have come. But we often hear not the poet, but look into the eyes of someone else’s photo.

What does Tsvetaeva have to do with this? Perhaps nothing. Even for someone like her with a strong sense of fate, it was difficult to predict the future. But perhaps she was to blame in some sense.

The last book of Tsvetaeva’s lifetime was published in her homeland in 1922. Over the 17 years of her forced emigration, readers generally forgot her name. Her return to the Motherland did not change a thing — the Soviet critics prohibited the printing of her work. It took another 17 years before the Soviet authorities began publishing her poems. In 1957, Crocodile magazine responded to one of the first appearances of her work in print. It was the great feuilleton of Ivan Ryabov who, after making a series of claims in the spirit of socialist realism, concluded that Tsvetaeva’s place ‘in the Russian Parnassus is a very modest one.’

Credit is due to her fellow writers, however, who demanded an apology. In particular, Lidia Chukovskaya wrote: ‘The poetry of Marina Tsvetaeva belongs to the future. As for Ryabov, if he is remembered by his descendents at all, it will be only as one of the detractors of the great poet: in some out of the way place, in small print, in the notes to the “Complete Works of Marina Tsvetaeva,” his current shameful article will be mentioned.’

Sixty years have passed, and things have turned out pretty much as Chukovskaya predicted. But the fact that the ‘Complete Works’ of the poet have yet to be published means, perhaps, that Ryabov is not the only one who deservesto be remembered in small print.
IQ