With the peak of the crisis behind us, there’s still a long way to recovery

After collapsing in the early days of the COVID-19 pandemic, consumer demand has partly recovered in Russia. The lowest point in consumer confidence seems to be behind us, but we should not expect a noticeable recovery any time soon, according to HSE ISSEK Centre for Business Tendency Studies (CBTS). Based on a recent consumer survey in Russia, IQ compares consumer sentiments as we are entering the second wave of the pandemic with those reported at the start of its first wave.

Early in the COVID-19 epidemic, CBTS experts warned about the potentially harmful economic effects of increased pessimism among middle-aged consumers who form the bulk of Russia's middle class and its most economically active population group. Consumer self-assessment of personal finances and the overall economic situation in the country declined in all groups, but the most pessimistic attitudes were found in 30–49 year olds, rather than in older generations, as used to be the case.

However, a survey conducted by Rosstat* in the third quarter of 2020 found middle-aged Russians to be ahead of other age groups on their way back to consumer optimism. Compared to the second quarter, the consumer confidence index (CCI) of 30–49-year-olds increased by 10 percentage points (pp), more than that of younger Russians (+7 pp) and those over fifty (+6 pp). Despite this increase, CCI values remain negative in all groups.

*Balances (in %) reflect a difference in the proportions of respondents reporting either an increase or a decrease in the studied indicator compared to the previous period, and also a difference in the proportion of respondents reporting the studied indicator to be either 'above normal' or 'below normal' for the period in question.

Between April and June 2020, the CCI in Russia declined more rapidly than during any other period in the 22 years of observation, dropping by 19 pp compared to the first quarter of 2020. Between July and September, it recovered 8 pp but remained negative (-22%). These trends, according to the CBTS, may suggest that 'Russian consumers have in some way or another adapted to the new coronavirus reality', but the country's CCI components 'have barely pushed off the bottom and are still far below their average levels'.

Positive changes (5 pp to 9 pp increase) are observed in the perception of current and expected changes in the country's economy and personal finances. Even more optimism (+13 p.p.) is found in consumer perceptions of whether this is a good time for major purchases. The latter does not, however, reflect a major improvement in either household finances or overall consumer confidence. The reason is perhaps that with businesses reopening after the quarantine, people are beginning to catch up on their deferred demand for entertainment, shopping, tourism, catering and transport. 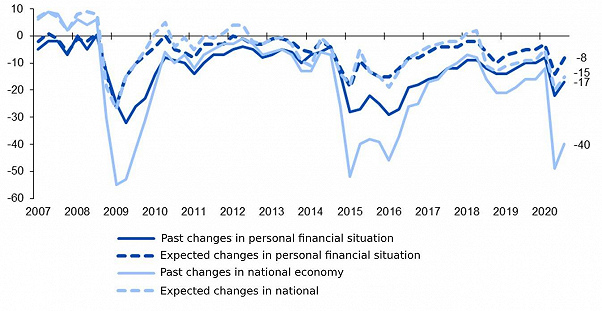 Most people are still pessimistic in respect of their own financial situation and inflation projections. Only one in ten Russians finds their finances improved, while the vast majority still do not expect prices to become stable, much less go down.

That said, positive and neutral opinions are increasingly common. The proportion of respondents describing their financial situation as 'good' or 'average' has increased from 6 to 8% and from 62.8 to 65.7%, respectively, while the share of those who expect prices to rise significantly has dropped slightly from 54.7% to 48.5%.

According to the HSE Centre for Business Tendency Studies, the lowest point in Russian economic sentiment was already over by the third quarter of 2020. The same is true of most EU states despite the overall negative perceptions everywhere, except Sweden, the only EU country where the consumer confidence index has a positive value (+1%) – in others, it varies from -0.2% (Denmark) to -35% (Greece). 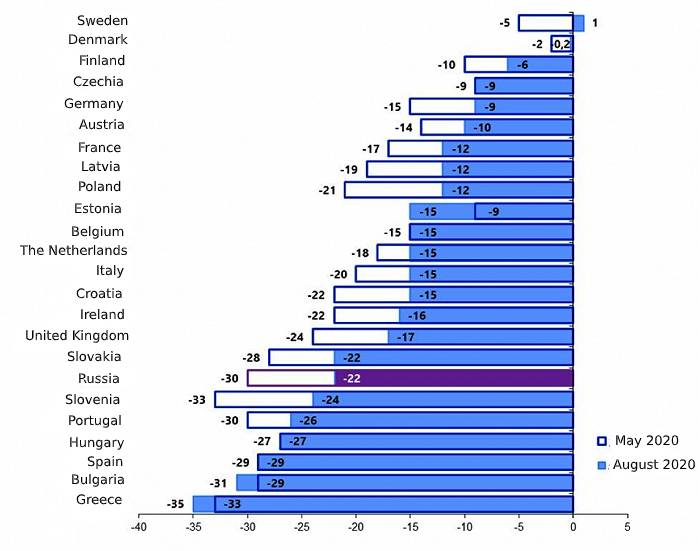 Why are Russian consumers more confident – and will things really get better for them?

According to Georgy Ostapkovich, Director of the HSE ISSEK Centre for Business Tendency Studies:

– It is now obvious that the most pessimistic pandemic and economic scenarios which the respondents feared in the spring did not materialise. We passed the lowest point of the 'corona crisis' between May and June, and then a reversal of the negative trend was observed. In the third quarter, most lockdown restrictions were lifted, many people resumed their normal work schedule and were able to make up for some of their lost income, while the state provided substantial support to the public and businesses. All of this is reflected in the results of the consumer expectations survey.

While the increase in the Consumer Confidence Index is certainly a good thing, the third quarter consumer trends are not outstanding and are similar to those observed at initial stages of recovery after previous crises and recessions, e.g. in 2009 and 2015.

In addition to this, the positive shifts are due to a decrease in pessimistic and increase in neutral sentiments, whereas the number of optimists has hardly increased at all.

The high variability of the CCI in the second and third quarters was largely caused by the strong psychological aspect of consumer perceptions which is always present at times when economies enter or exit 'economic disasters'. The second-quarter survey was filled out in May 2020, at the peak of the coronavirus crisis and the 'Great Self-Isolation'. Naturally, the public was affected by the pressure of uncertainty and came up with a rather pessimistic response. In contrast, the third-quarter survey was conducted in August, when most economic activities had resumed after the long lockdown and announcements of an upcoming Russian vaccine gave hopes for a final victory over COVID-19. Against this positive background, people were more optimistic in their assessment of the situation.

If a similar survey had been conducted in late September amidst reports of a second COVID-19 wave, the responses, in all likelihood, would have been less enthusiastic.

One of the more worrying trends is that most respondents still have negative views on their own financial situation. Indeed, their perception of personal finances is a major psychological factor affecting what people think of the current and future state of the broader economy. This year, real disposable incomes are expected to decline by between 3 and 4 per cent, compared to 2019, given a moderate scenario of the COVID-19 pandemic. This is an estimated two trillion roubles of lost household revenues or more than the monthly turnover of the retail sale of food in Russia.

Expecting an improvement in consumer mood and confidence under these circumstances is unrealistic.

It appears that we cannot expect a noticeable increase in the Consumer Confidence Index before mid-2021 at the earliest, if the economic situation and household incomes stabilise by that time. There are some cautious signs that this may be the case, unless we are not once again caught in a 'perfect storm' or encounter another flock of 'black swans'.

*This article uses the findings from a consumer (household) survey conducted by Rosstat on a quarterly basis in all Russian regions since 1998. The survey respondents are more than 5,000 Russians aged 16 and older. The survey includes questions about the respondents' opinion on the overall economic situation, personal finances, savings and other aspects relevant for consumer confidence.

Economics
Research
Russians Consider Themselves Poorer than They Actually Are

Only 10% know where they really stand on the income scale