Obstacles to international economic integration in the post-Soviet space

The creation of the Customs Union and the Eurasian Economic Union (EAEU) contributed to the development of mutual trade between their member countries. That process picked up pace significantly starting in 2019. Still, it is too early to say that the efforts by EAEU member states to achieve economic integration have been an unqualified success. This problem is the focus of a joint report that a group of experts from Russia (HSE), Kazakhstan, Belarus, Armenia and Kyrgyzstan presented at the XXIII Yasin International Academic Conference organised by HSE University in April.

The EAEU and the global challenges of the 21st Century

The EAEU (Eurasian Economic Union) is an international organisation for regional economic integration, officially established in January 2015 after several years of negotiations. The EAEU has five member countries: the Republic of Armenia, the Republic of Belarus, the Republic of Kazakhstan, the Kyrgyz Republic and the Russian Federation. The predecessor of the EAEU was the Eurasian Economic Community (EurAsEC), that was dissolved in connection with the creation of a new union.

The Eurasian Economic Union, as stated on the website of the organisation itself, was founded ‘to comprehensively upgrade, raise the competitiveness of and cooperation between the national economies, and to promote stable development in order to raise the living standards of the nations of the Member-States’.

The report’s authors suggest that the EAEU has had to overcome unprecedented challenges in its formation because the second decade of the 21st Century and the beginning of the third have been full of economic and political upheavals. ‘An analysis of integration processes in the EAEU space provides a unique opportunity to directly observe the historical process of creating a unified market in a territory that makes up 1/6 of the area of all 193 countries of the world’, the experts note.

They have conducted the research presented in their report systematically and continuously since 2018. Using an original methodology, the authors constructed integration indices that an international team of researchers from all EAEU member countries use. ‘The indices have been calculated on an ongoing basis for five years now, and this makes it possible to build time series and track the development of integration processes’, the researchers explain. An analysis of problems (barriers) to mutual trade—namely, exemptions that were agreed upon when countries joined the EAEU—occupy a separate place in the report.

‘The creation of the Customs Union and then the EAEU halted the breakdown of mutual trade conditions that occurred in 2002-2009’, note the authors of the report.  They argue that intra-industry trade began making a significant contribution to integration processes in 2019. ‘The processes of specialisation and cooperation within the EAEU have intensified, as has, in all likelihood, the process of forming “internal” value chains’. There was a reorientation towards EAEU partners versus third countries and the penetration of imports demonstrated the most stable dynamic. 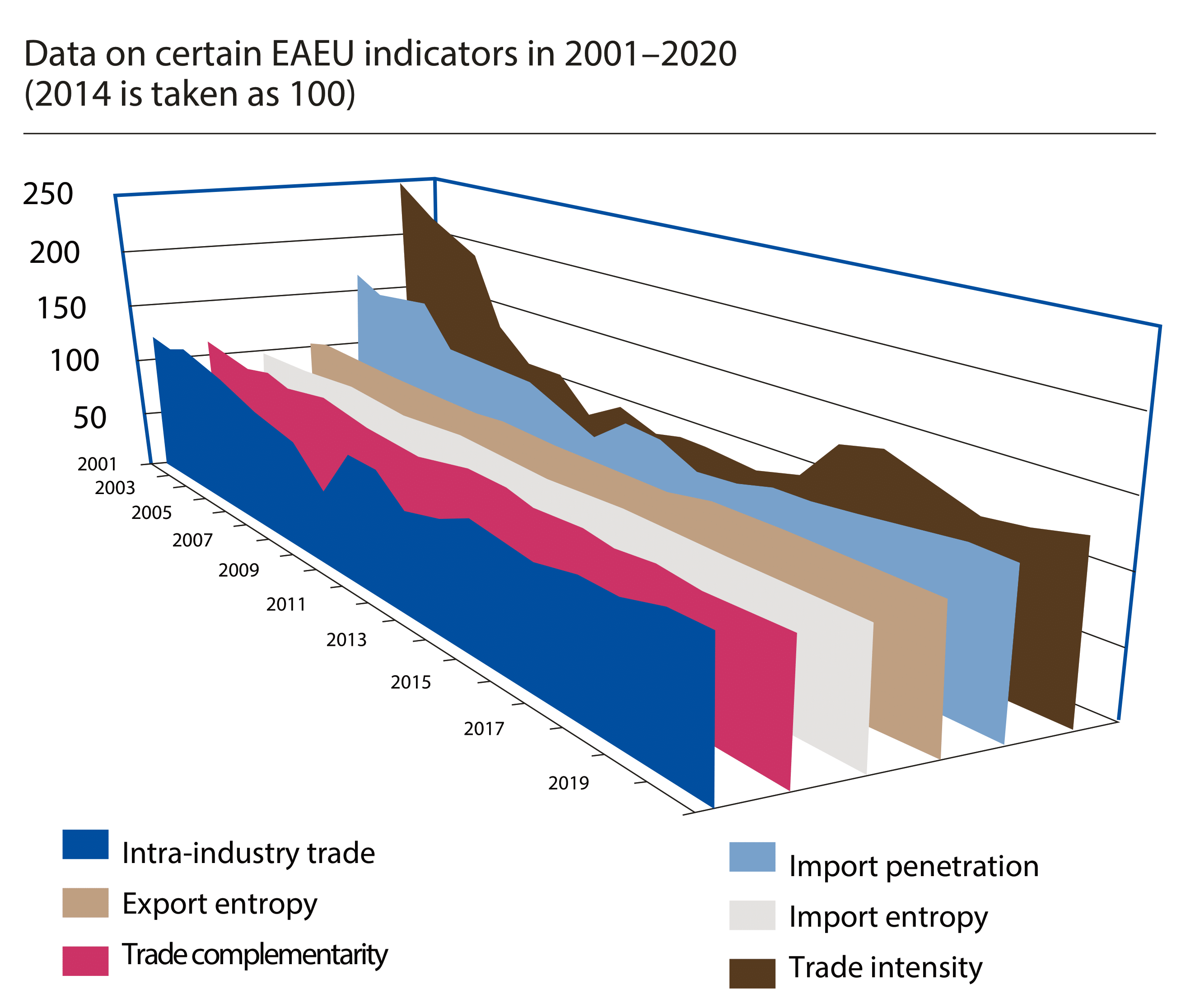 Nevertheless, the indicator for complementarity of trade (the structure of exports corresponding to the general structure of imports of members states) did not grow for the five-year period of 2015-2020. Thus, it can be said that integrative interaction has not led the commodity structure of trade to adapt to the peculiarities of mutual demand and the needs of the EAEU member states. According to the authors, such a situation signals that trade plays too small a role in forming common economic activity among EAEU member states.

This is also indicated by the absence of a noticeable increase in trade entropy indicators – that is, a movement towards a more even distribution of trade flows between the EAEU member states. Experts concluded that the creation of the EAEU led to an improvement in volume-related indicators of mutual trade cooperation, rather than to a deepening of specialisation and cooperation – that grew more slowly.

Since its formation, the EAEU saw mutual trade in services between its member states grow by 20.9%, to $9.7 billion in 2019. In 2020, however, that figure fell by 27.8% to $7 billion. Over these years, as the integration process has intensified, there has been a significant increase in the indicator for the complementarity of trade, the report notes. 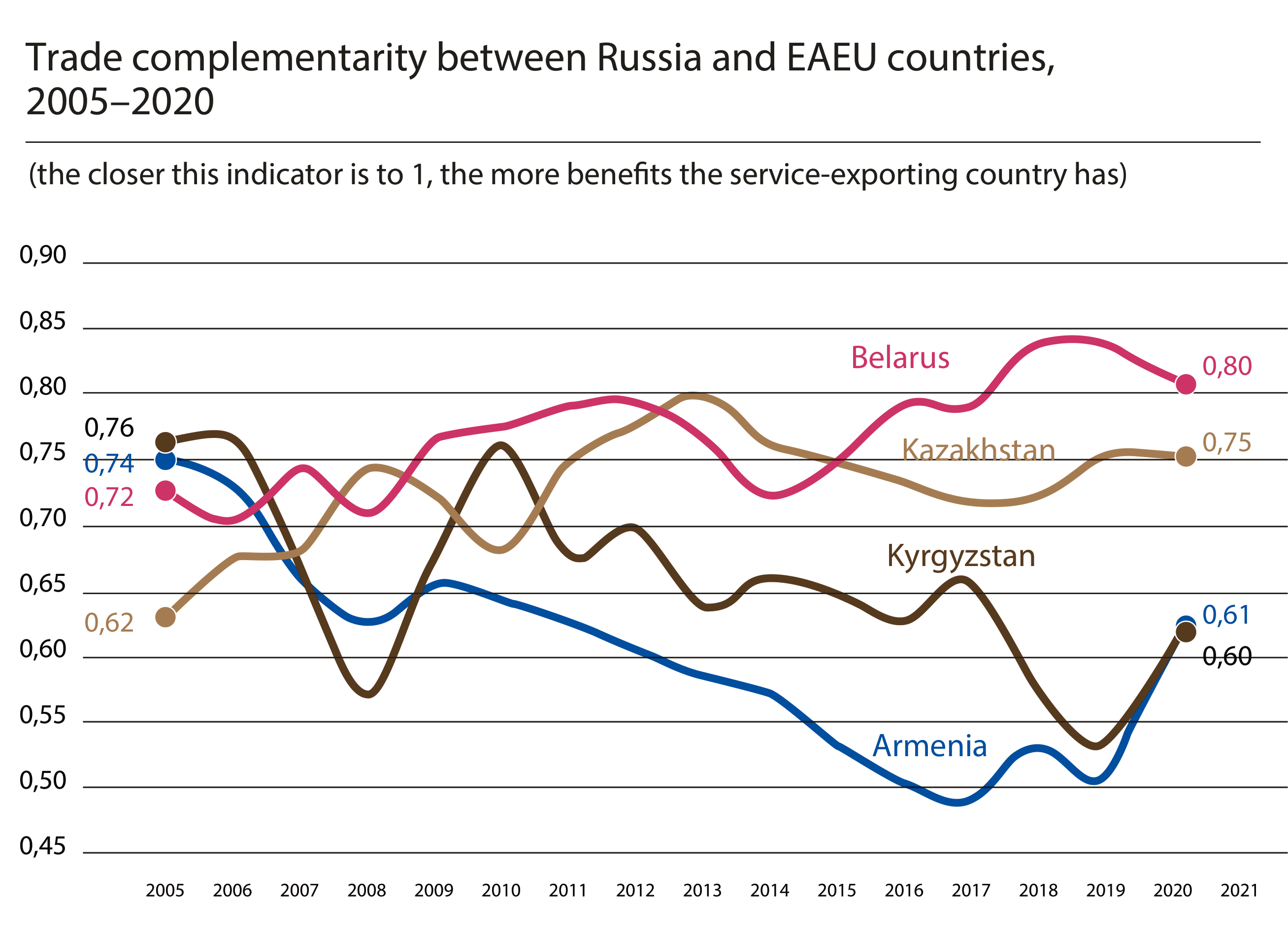 Analsysis showed that for Kazakhstan and Belarus, Kyrgyzstan is the most reliable market for the sale of services; for Armenia, Russia is the best market; for Kyrgyzstan, Armenia; and for Russia, Belarus and Kazakhstan.

Mutual investment within the EAEU has not yet become a factor in expanding mutual trade. In 2015-2021, the total volume of accumulated mutual investments of the EAEU member countries decreased by 1.4%, from $17.05 billion to $16.8 billion. The emerging crisis was a consequence of the spread of COVID-19. The pandemic has not become a significant factor in uniting the countries of the Union, the experts say. 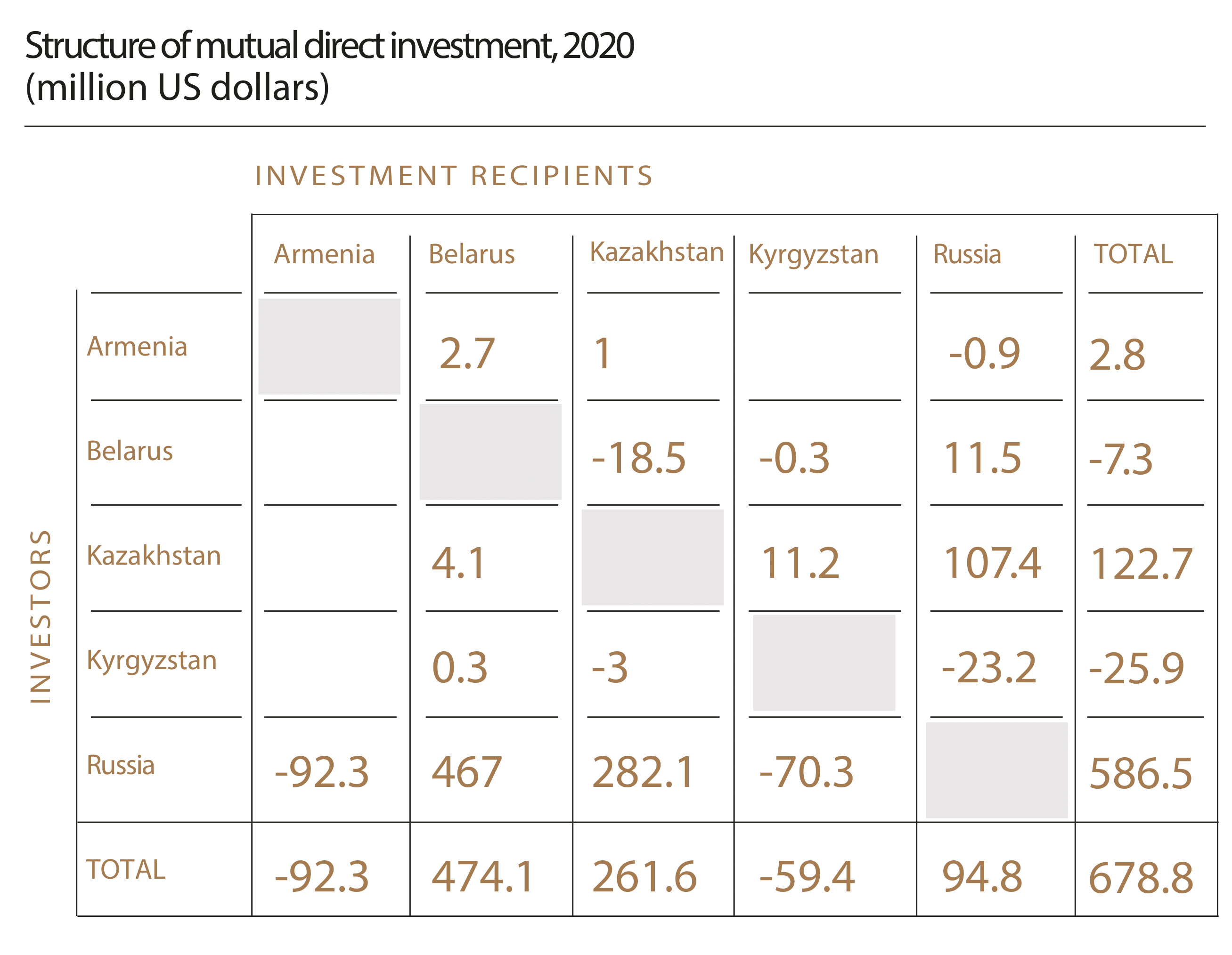 Kazakhstan demonstrates the most consistent dynamics for mutual investment and trade, followed by Russia. In other countries, the dynamics change frequently. According to the experts, the results of the analysis of mutual investments are consistent with the conclusion that there is insufficient mutual cooperation and specialisation between the economies in the EAEU space.

The complex issue of barriers

The main goal of the EAEU is to create a unified market and efforts to minimise obstacles to mutual trade hold great importance in this regard. In their report, the experts devote a great deal of attention to the issue of exemptions—restrictions and exclusions from economic cooperation. Exemptions might be related to national security concerns, such as services for the trade in military equipment and materials; or economic issues that carry political importance or the potential for increased risks of damage and liability, such as with the design and construction of potentially hazardous facilities. 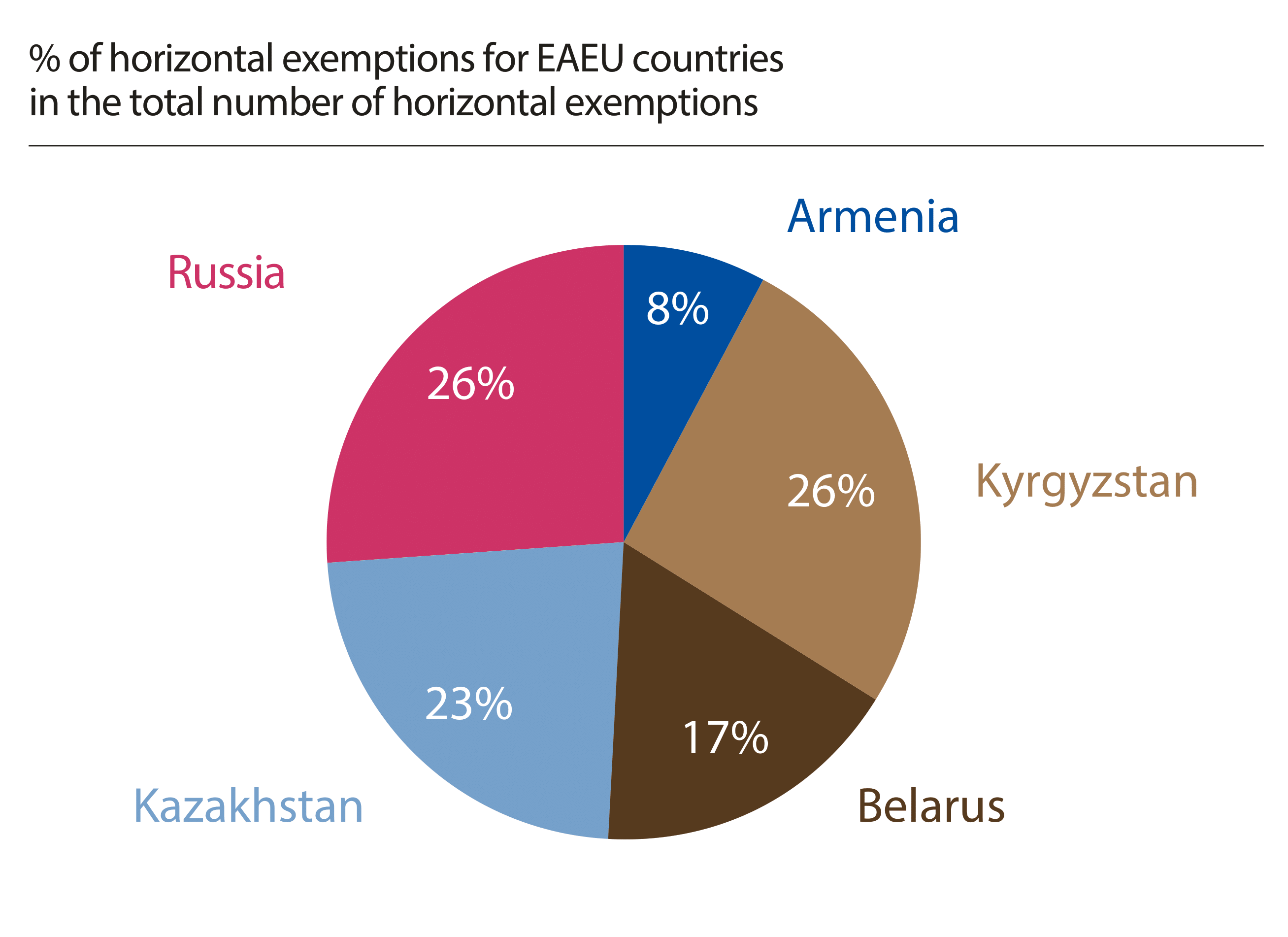 The Russian individual national list includes 38 exemptions—more than that of any other EAEU member state. In 2014, the Supreme Eurasian Economic Council approved a list of sectors (sub-sectors) of services in which a unified service market operates. Russia, along with other EAEU states, has made a number of exemptions to it. 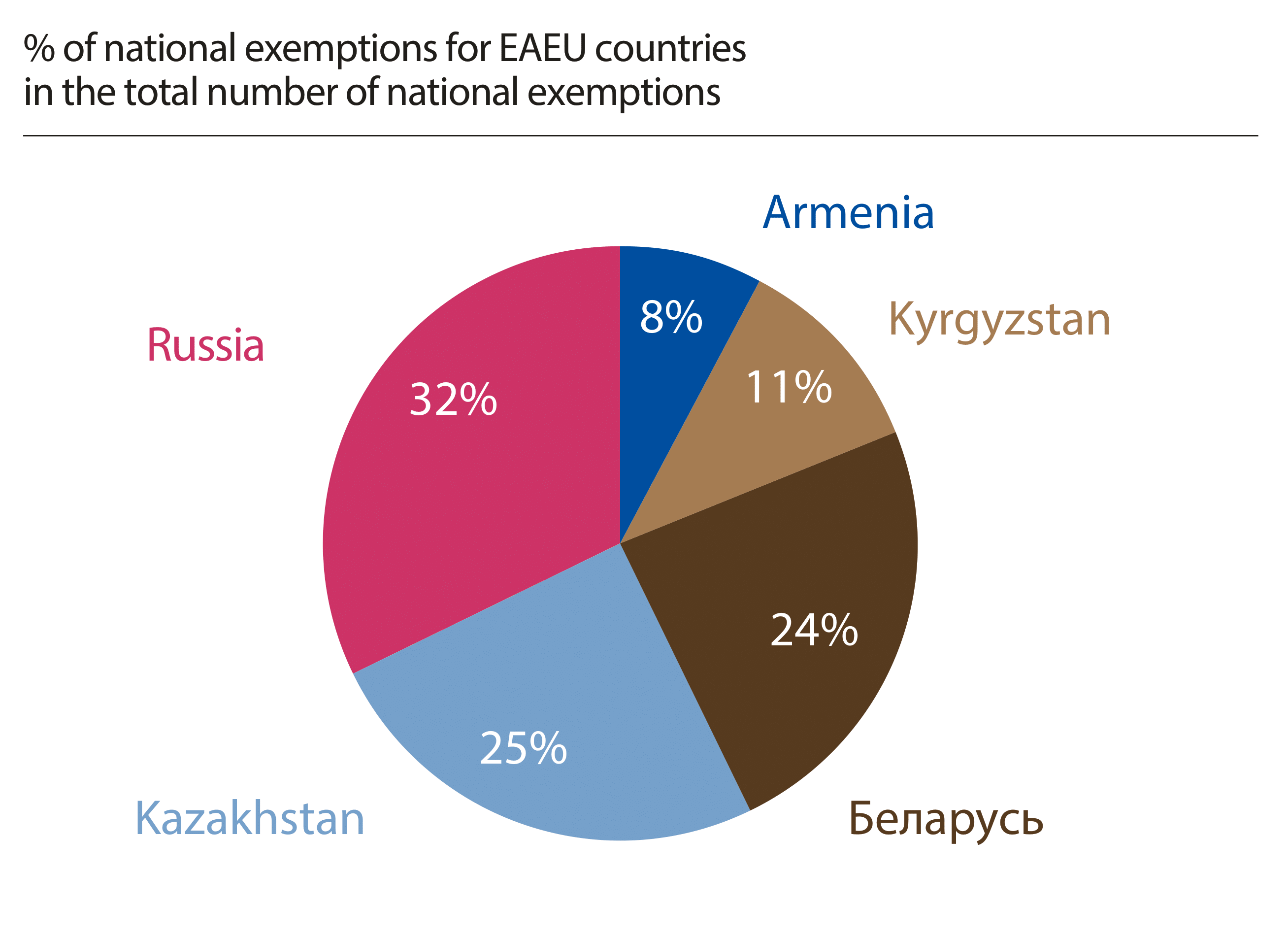 ‘All of them are exclusively related to services in the field of wholesale and retail trade. We are talking about trade in oil and oil products, gas, electricity, nuclear materials and radioactive substances, weapons and military materials, scrap metal, precious metals and stones, narcotic drugs and psychotropic materials, sturgeon and caviar, ethyl alcohol and alcoholic products, tobacco products, as well as measuring devices used in the field of state metrological control and oversight’, the report says. 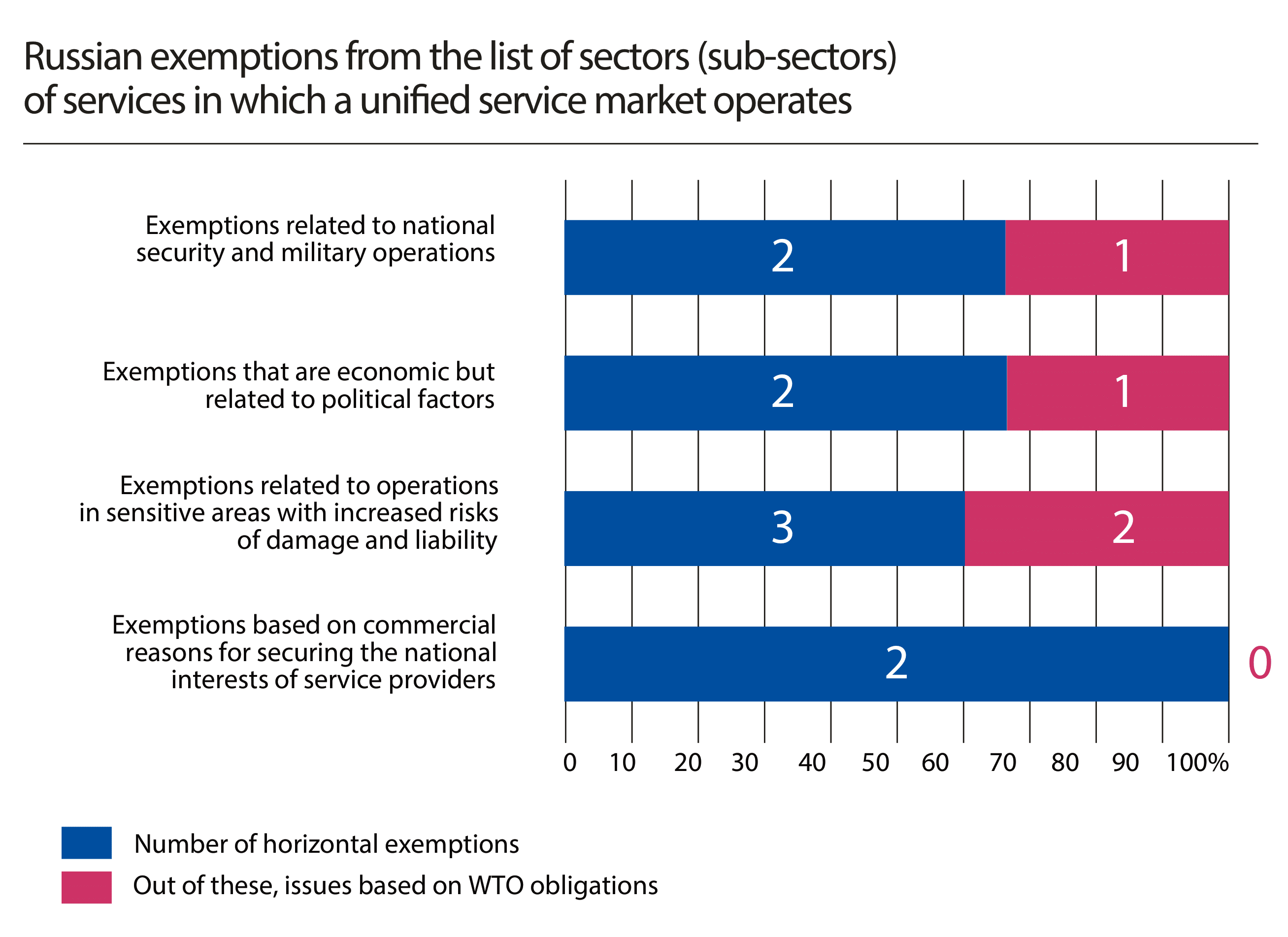 ‘When removing restrictions on trade in services, it is not necessary to follow the tactics of liberalising the full sector (subsector) of services. Perhaps members should be more active in adopting a partial liberalisation approach’, the report says. In this case, the EAEU countries would more actively remove restrictions on certain requirements of the Treaty, for example, by gradually reducing quantitative restrictions, followed by the granting of most favored nation treatment. At the same time, the possibility of making exemptions from the national regime would remain.
IQ

The report, Assessment of the EAEU integration processes in the field of trade — 2022, was prepared by a group of researchers and experts representing the AMBERD Research Center of Armenian State University, Belarusian National Technical University, the QazTrade Center for Trade Policy Development (Kazakhstan), the Institute for the Public Administration and Policy of the University of Central Asia (Kyrgyz Republic), and the HSE Institute of Trade Policy.

Author: Marina Selina, May 27, 2022
All texts by
Economics Long-read
Spotlight
Sociology
Interview
'We construct a portrait of Russian society'