Interesting work is valued almost as much as high pay, followed by job security

Situation: It is widely believed that most young people entering the labour market aspire to a high-paying job and a fast-moving career. But are they actually purely pragmatic?

In fact: Personal interest in their future work is at least as important for undergraduates as high pay, followed by job security and a good skills match, while career prospects only come fifth on the list. However, this pattern of preferences can vary based on gender, age, study area and other factors.

A large-scale study carried out by Anita Poplavskaya, postgraduate student at the HSE Faculty of Social Sciences’ Department of Economic Sociology, on a sample of 5,000 undergraduates at eight regional universities in Russia reveals the students' prevalent work values. The top five include high pay, interest in one's work, job security, skills match, and career prospects. These were followed by a friendly team in the workplace, a flexible schedule, mobility/relocation opportunities, and consistency with one's belief system. The key factors influencing work preferences include gender, living with parents or in a dormitory, area and year of study, academic performance, and employment during studies (within or outside of the university).

Based on factor analysis, Poplavskaya identified seven types of work values. Two of them – contribution to society and self-development – refer to intrinsic values, and the other five – material rewards, job security, social interaction, mobility, and flexibility – refer to extrinsic values. A paper on the study's findings has been published in the international academic journal ' Monitoring of Public Opinion: Economic and Social Changes'.

Work values refer to one's preferences for work and career which lie at the core of workplace motivation and performance. Work values can be intrinsic or extrinsic: the former concern the content of one's work and satisfaction derived from it, while the latter involve external rewards, whether material (pay, career advancement, perks and benefits) or intangible (respect, security, etc.).

Work values have been shown to have strong implications for one's career. According to studies, work values tend to influence the choice of career, job satisfaction, and professional achievement. Intrinsically motivated employees are usually more productive and successful in the employment market.

What about the work values of young people who are about to enter the labour market? A 2015 monitoring of education economics revealed that decent pay (58%) and a good workplace team (50%) were the most important aspects for young respondents, while one in four mentioned interesting work, and autonomy on the job was important for only one in ten.

A survey of employers revealed understandably different expectations. Companies look for specific personal qualities in university graduates and care less about their prior work experience, qualifications and academic performance.

According to 64% of surveyed employers, newcomers must show a personal interest in their work, followed in importance by a willingness to take responsibility and good teamwork skills.

In other words, employers prioritise intrinsic work values in new employees, while the latter tend to veer towards extrinsic values. Bridging the expectations gap requires a better understanding of how students' work preferences are shaped, and this is what Poplavskaya's study is mainly about.

In addition to examining how variations in work values are associated with respondents’ characteristics, she also looked for predictors of preference for some values over others. A review of international academic literature suggests that such predictors include gender, age, family background (parents' education and income), study area, and work experience.

How age and gender shape work value preferences (based on international research):

Women are more likely to emphasise the intrinsic aspects of their work, such as altruism and service to society (collectivist values), while men tend towards extrinsic motives such as achievement and high pay. Family and parenting responsibilities cause all respondents to appreciate extrinsic rewards such as high pay and job security.

Work value preferences tend to narrow down with age. Younger people expect 'everything all at once' from their future job, but learn to focus on a smaller number of aspects later on, due to better self-awareness and an increased sense of identity, as well as a more realistic view of employment.

Younger people tend to emphasise the intrinsic aspects of their work but shift to extrinsic reward expectations over time due to new roles in the workplace and family and changing motivations.

Early family experiences have been shown to influence adult values. Children raised in families with high social and cultural status tend to place more value on the content of their work and self-development opportunities.

It is assumed that a young person who still lives with his or her parents does not feel such an urgency to make a living and tends to focus on the work content irrespective of material rewards.

There is an association between one's study field and workplace priorities: those majoring in the humanities tend to prioritise altruism and their contribution to society, while students of applied sciences place more value on achievement, self-development, and social approval. Science majors have been shown to emphasise self-development, career advancement, prestige, and social interaction.

As for young Russians, their values, according to sociologists, have become increasingly rational and individualistic since the early 1990s, with intrinsic work values being replaced by extrinsic materialistic motives.

Based on the survey data, the author has formulated the following hypotheses:

The study uses data from an online survey conducted in the spring of 2020 by the Evidence-Based Digitalisation for Student Success Consortium of universities as part of the project 'Monitoring the Student Experience'. Undergraduates of the following consortium member universities took part:

Siberian Federal University, and others.

The survey questionnaire for students included a question on their main considerations in choosing a job after graduation. They could choose up to five options.

Poplavskaya examined the responses for associations between student characteristics and their preferred work values. She used factor analysis on the data to identify typical value complexes, and the correspondence between student characteristics and preference for certain types of work values were found by regression analysis, with seven dependent variables reflecting factor estimates for each factor identified. The independent variables were the respondents' socio-demographic characteristics (gender, living with/without parents), education (study field, year of study, academic performance), and employment within or outside of their university.

The top five chosen values included high pay (63% of responses), personal interest in one's work (61%), job security (46%), skill match (41%), and career prospects (37%), followed closely by a friendly workplace team (33%) and then, by a large margin, aspects such as a flexible schedule, opportunities for mobility/relocation, consistency with one's belief system, and the possibility to create something new in the workplace. 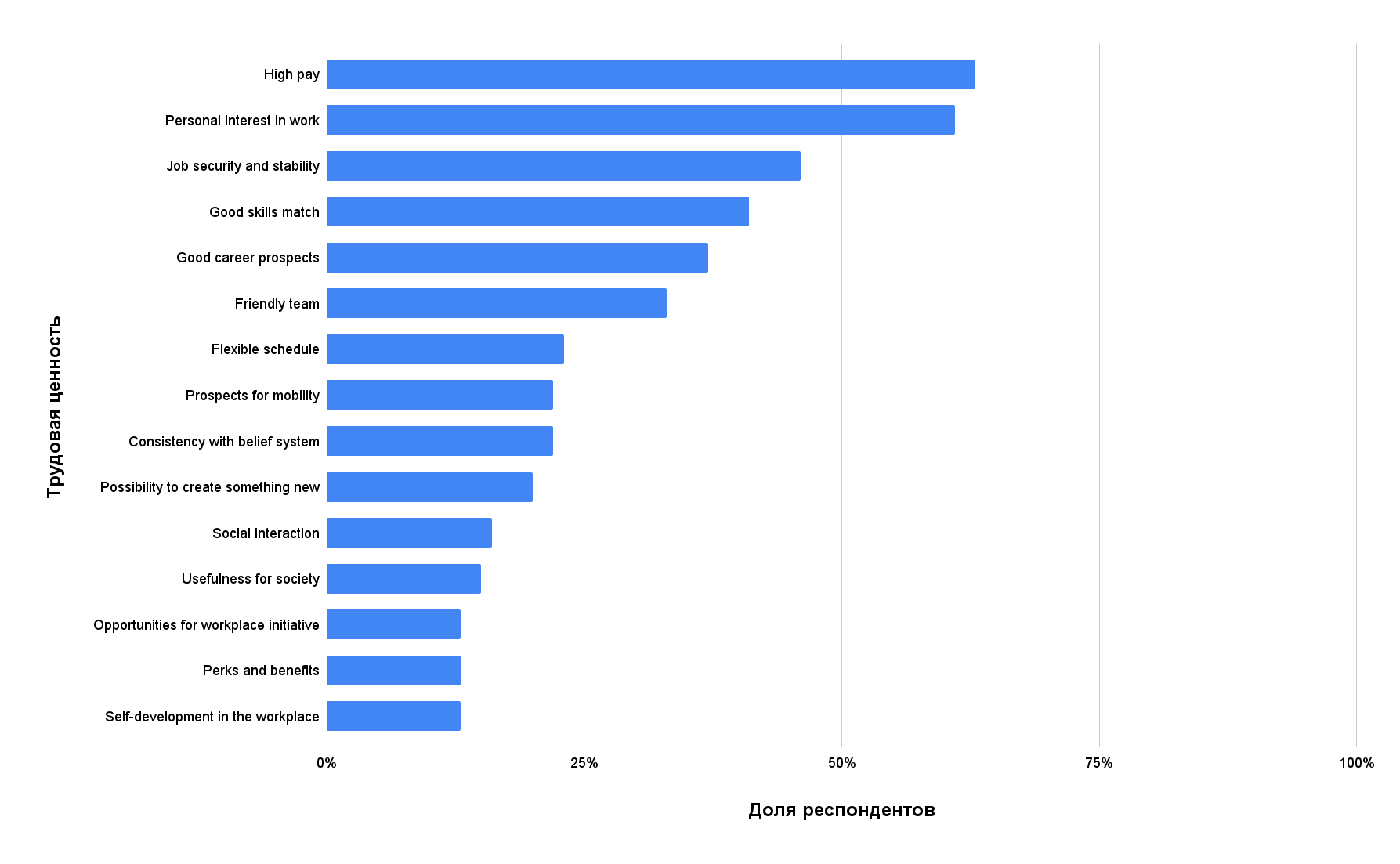 All these factors can be classified into 'internal' and 'external'. The emphasis on 'utility' and 'self-development' means that work has intrinsic value for a person. The emphasis on 'material rewards' and 'job security' reflects a stronger focus on remuneration and social security benefits rather than the content of the work itself. The emphasis on 'social interaction' and 'mobility/relocation' indicates the importance of socialising and of the workplace environment (which is closer to extrinsic values).

A regression analysis produced a series of interesting findings:

Social interaction is important for female students. Other collectivist values, contrary to the hypothesis, are less significant for young women than for young men. Having the opportunity to take initiative does not have priority for female students, as opposed to job security, a value that was rated highly.

As for the importance of a flexible schedule, the result is rather counterintuitive. Women are generally believed to have a preference for part-time employment and flexible work hours, but the study does not confirm this assumption – perhaps because young women are more likely to be employed full-time than young men. However, one’s preference for a fixed schedule could change later on, e.g. as they start a family and require more flexibility in their working hours.

Students who still live with their parents are less concerned about career advancement, high pay and job security – this would appear to be because they are better protected financially.

In contrast, those separated from family and living in a dormitory emphasise either the usefulness of work to society or a change of environment. It is possible that the nature of their social interaction with their peers is an important factor.

The older a student, the less value they place on aspects such as self-development and usefulness of the work to society and more on job security.

Engineering students favour individualistic intrinsic values (self-development), but are also more inclined to prioritise interest in one's work (this is consistent with findings from other studies). Students in the humanities, as expected, are more likely than engineers to value work for its usefulness to society. Science students tend to appreciate mobility and relocation opportunities.

Being employed by their university increases the likelihood of intrinsic collectivist value orientation (work as duty), while being employed outside of the university during studies is often associated with an intrinsic motivation for self-development. It seems that students who combine studies with working outside of their university are more focused on acquiring new skills in the workplace and gaining work experience and are more likely to take initiative. But this type of employment is not associated with valuing work for its usefulness to society.

Why Should We Care?

This study provides an insight into the basic motivation of newcomers in the labour market. Employers can benefit from having a better idea of undergraduates' attitudes towards their future work. 'Understanding the differences in work values held by today's undergraduates is also important for effective communication between faculty and students, for promoting student involvement in learning, and for updating curricula and the educational process', according to Poplavskaya. More broadly, knowing which aspects of work students prioritise today can help their future employers across sectors to incentivise better performance.
IQ