There were five global waves comprising of 125 revolutions

Assumption: The 1917 Russian Revolution that began on November 7th (October 25th in the Julian calendar used in Russia at that time) changed the global situation drastically by triggering a series of revolutions worldwide.

In reality: Red October was the most prominent, but far from only, trigger of revolutions in the 20th century, a timethat saw far more upheavals than the century before it, some of them unprecedented in their objectives, ideologies, and outcomes.

Having studied the 20th century revolutionary processes, Andrey Korotayev (HSE), Leonid Grinin (HSE) and Anton Grinin (MSU) have put together an extensive evidence base, proposed a new typology of revolutions and revolutionary waves, and introduced the concept of 'analogues of revolutions'. Their study '20th Century Revolutions: Characteristics, Types, and Waves' is the follow-up to an earlier paper published in Russian. The new findings are presented in Humanities & Social Sciences Communications.

The authors explain their interest in the topic through perceived gaps in contemporary theories of revolutions — in particular, the authors argue that such theories are 'ill equipped to explain revolutionary waves' and often fail to examine revolutions in the context of similar events such as analogues of revolution.

The key difference between classically defined ‘uprisings’ and analogues of revolutions lies in the manner in which the government is replaced: in the latter case, it occurs through a coup or peaceful elections rather than through mass action, while mass mobilisation either precedes or follows the overthrow of the old government.

Read more
Machine Learning has Helped Forecast Global Hotspots of Unrest and Revolution. From Lebanon to Georgia. HSE cliometrists named the countries with the highest risk of civil unrest in the next five years
Russian Scientists Predicted Increased Unrest in the United States back in 2010. How Cliodynamics Can Chart Social Dynamics

Examples defined by the authors as analogues of revolutions include Hitler’s rise to power through elections with preceding and subsequent mass mobilization, the military coups in Egypt, Iraq, Yemen and Libya in the 1950s and 1960s, and the social and political unrest in Venezuela following Hugo Chavez’s election as president.

The first analogues of revolutions in the 1930s followed the unprecedented global changes caused by the First World War and the Great Depression. Typical mainly of Latin America, Asia and Africa, such processes were numerous and accounted for nearly 30% of all revolutionary events in the 20th century.

The study estimates the total number of such events at 125, including 89 revolutions and 36 analogues of revolutions. The authors propose a typology of revolutionary events and identify several revolutionary waves, with a series of at least four or five revolutions taking place in different countries over a decade or less.

During the first phase of the study, the authors examined their evidence base to compare the revolutions of the 20th and 19th centuries, identifying the specific characteristics of the former, and creating a typology based on the details of 125 events. And finally, they used their typology and a taxonomy of the 'world-systemic causes' of revolutions to define the major revolutionary waves of the 20th century.

What Did They Find?

National and national-liberation revolutions were the most numerous, totalling 34 across the 20th century. The former sought to create a national state 'on the ruins of multinational empires' (including the 1918–1919 Austrian revolution, the 1917–1921 Russian revolution, and the 1990s collapse of the USSR). The latter type occurred mainly in colonies and were aimed at gaining independence (such as the 1919-1923 Egyptian anti-British revolution and the 1954–1962 Algerian war against France).

Democratic revolutions totalled 22 and sought to transform the political system, i.e. to overthrow a monarchy or dictatorship (such as the 1917 Russian revolution, the 1931–1939 revolution in Spain, the 1918–1919 revolution in Germany, and the April 1960 revolution in Korea).

The second half of the 20th century saw a series of anti-Communist revolutions seeking the restoration of economic freedom and private property among other things, occurring in the former Socialist Camp, from the Hungarian Uprising in 1956 to the Prague Spring in 1968 to the protests in Mongolia, Bulgaria, the GDR, Poland, Romania, Czechoslovakia, and Albania the end-1980 and early 1990s.

There were 14 Revolutions defined as social, seeking to address social injustices related to land use, income distribution, and labour rights (such as the 1910-1917 Mexican revolution, the 1931–1939 revolution in Spain, and the first Russian revolution in 1905–1907).

The authors describe revolutions seeking to modernise the state, to overcome its backwardness, and to ‘restore it to former glory’ as power-modernist revolutions (examples include the Young Turk Revolution and the Kemalist Revolution, both in Turkey, the 1911–1913 events in China, and the 1952 events in Egypt), making up ten of the revolutions covered. Other events were fewer in number and included religious, racial or statist (i.e. prioritising the role of the state) national-socialist revolutions.

Many revolutions, however, do not lend themselves to straightforward classification due to their complex nature and changing objectives: e.g., the 1931–1939 social revolution in Spain started out as a democratic (anti-monarchist) one, as did the Russian revolution, turning Communist in November 1917.

Distribution of the 20th century revolutions by type 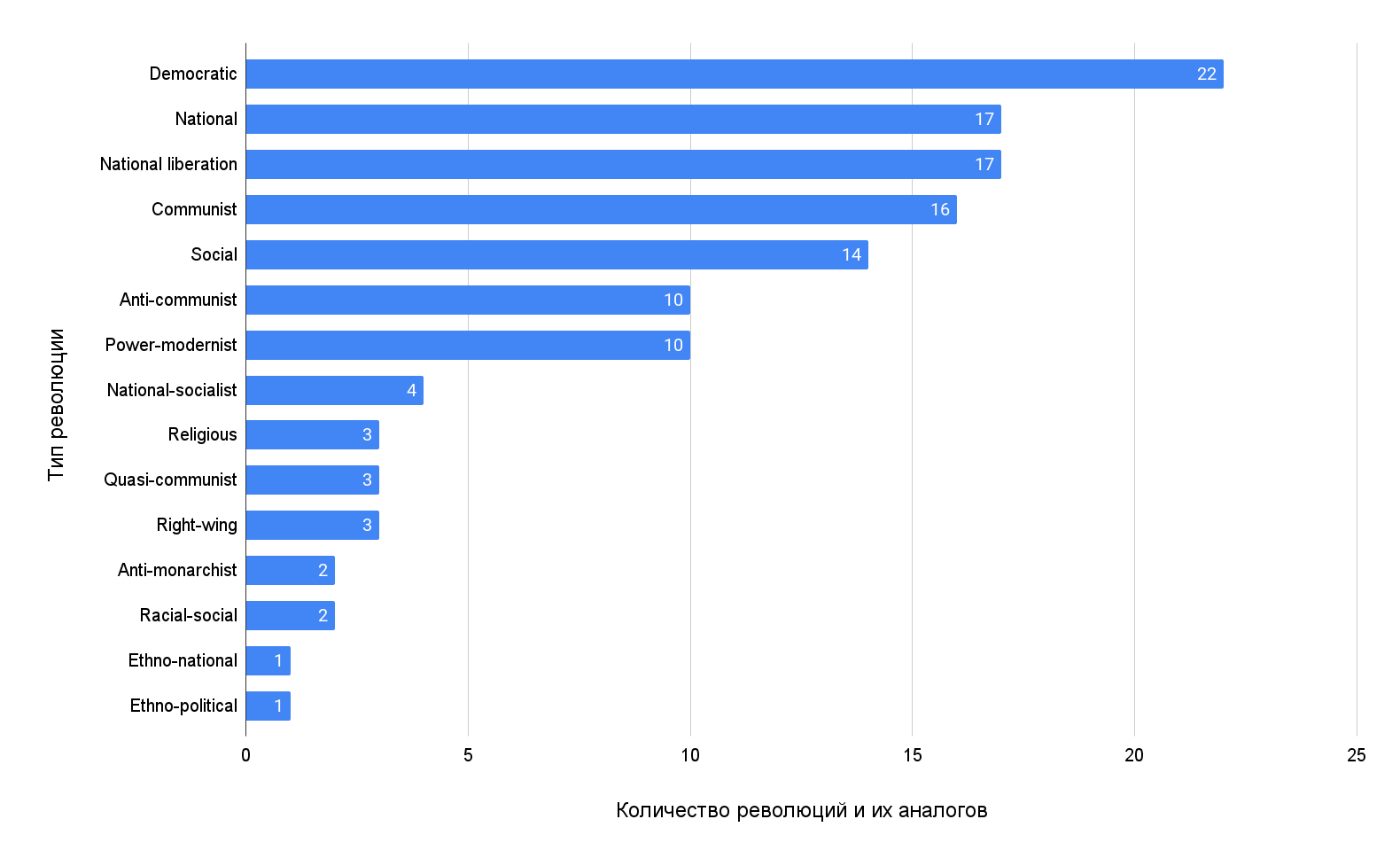 The multitude, and, indeed, the occurrence of certain types of revolutions, such as Communist and anti-Communist, reflect the specific nature of 20th-century protests. Concepts such as equality before the law, which had been taking root since the late 18th century, transformed into a demand for equality of consumption. According to the researchers, this led to the growing influence of socialist and Communist ideas, including calls to abolish private property.

The revolutionary process started to shift from the core of the World System (advanced economies with political power) to the periphery (countries dependent on, and exporting raw goods to, the 'global core') and the semi-periphery (countries positioned between the former and the latter), causing an almost tripling in the number of revolutions in the 20th century when compared to the 19th.

Revolutionary sentiments grew stronger, while the position of traditional authorities weakened due to external factors such as world war and economic crises, the collapse of colonial empires, and confrontations between different ideologies, such as Nazism and Communism or capitalism and socialism. Rather than standalone revolutions, these powerful processes triggered a series of revolutionary waves, each sweeping through several countries over a relatively short period of time.

Exactly how many revolutionary waves hit countries in the 20th century is open to debate. A consistent analysis of these phenomena was introduced fairly recently in the mid 1990s and still lacks a uniform approach. The authors of this study argue that there were five waves, each lasting from six to eight years and spanning between eight (the first wave) and 24 (the fifth wave) revolutions.

The fifth wave (1989–1996). The main events were the anti-Communist revolutions in Eastern Europe, post-Soviet republics, and Mongolia.

These different waves were triggered by different factors, among them: the colonial division of the world, modernisation of underdeveloped and oppressed countries, WWI, which destroyed four empires, and WWII bringing victory to the USSR and facilitating the propagation of Communist ideology that later receded with the Soviet Union's collapse.

It is noteworthy that four out of the five waves involved events in Russia and the USSR: the Russian Revolution of 1905–1907 bolstered the revolutions in Asia; the Russian Revolution of 1917 led the way for other national movements; the Soviet State caused Communists to rise to power in many countries, and the USSR's collapse and disintegration resulted in the establishment of non-socialist regimes in most East European countries.

Why Should We Care?