Regular version of the site

How the Moscow Metro shapes the local mentality and keeps the city’s history alive.

While the subway certainly adapts to Moscow’s needs, the city also adapts to its metro. The newly launched Moscow Central Circle railway's slogan – The City's Coming Near You – easily applies to the subway as well, reflecting the transport system’s role in people’s everyday activity. According to the authors, Moscow and "the entire city life are built around the subway, passing through it." Here is where this can be seen:

in the construction of new residential projects;

in real estate prices, which tend to be higher for apartments near  Metro stations;

in how often people visit shops, cafes, parks and cinema theatres located near subway stations compared to those away from the Metro.

In other words, the Metro has become a socioeconomic reference point, and proximity to a Metro station is perceived as a symbol of wellbeing. Therefore, "launching new Metro lines as soon as possible" is essential, according to Maxim Ammosov, Lead Architect with the Mospromproject Company commissioned to design Moscow subway facilities. Having a Metro station nearby makes a great difference to people's sense of wellbeing. "Everyone living in Moscow would like to move around the city freely in a fast, convenient and safe way," Ammosov adds.

In addition to this, the Metro also serves as a mental point of reference, a kind of 'zero meridian'. Muscovites tend to construct their own mental maps of the city to navigate its streets in the most efficient way. The subway plays an essential role in such navigation, because…

the average Muscovite is more likely to use Metro station names rather than district names as reference points. "Few people will be able to tell you confidently the location of districts such Veshnyaki, Kotlovka, Golyanovo, Marfino, Zyuzino and some others – unless they live nearby," the authors note. "However, replacing them by the names of relevant Metro stations – Vykhino, Nagornaya, Schelkovskaya, Petrovsko-Razumovskaya, and Kakhovskaya – can increase the response rate dramatically";

toponyms which are not reflected in the names of Metro stations tend to be ignored and easily forgotten;

subway cars and platforms also serve as reference points. Planning to meet someone in the Metro, a Muscovite would specify, in addition to the station name, "near the front/end car of the train coming from the centre" or "in the middle of the platform";

subway-related urban legends feed into people’s everyday practices. A while ago, students of the Bauman University were the only ones who rubbed the bronze borderguard dog's nose in Ploschad Revolutsii station for good luck. Today, diverse crowds of both children and adults passing the station never fail to polish the muzzle.

One of the reasons why the subway serves as a psychological reference point for so many people is that the Metro is perceived as a symbol of stability, unchanging over time. During the post-Soviet turmoil, it was of the few urban services which continued to function fairly smoothly, thus creating a sense of security, the researchers explain. By using the Metro, people could engage in their habitual everyday practices; in a sense, the underground provided a remedy for their anxiety. 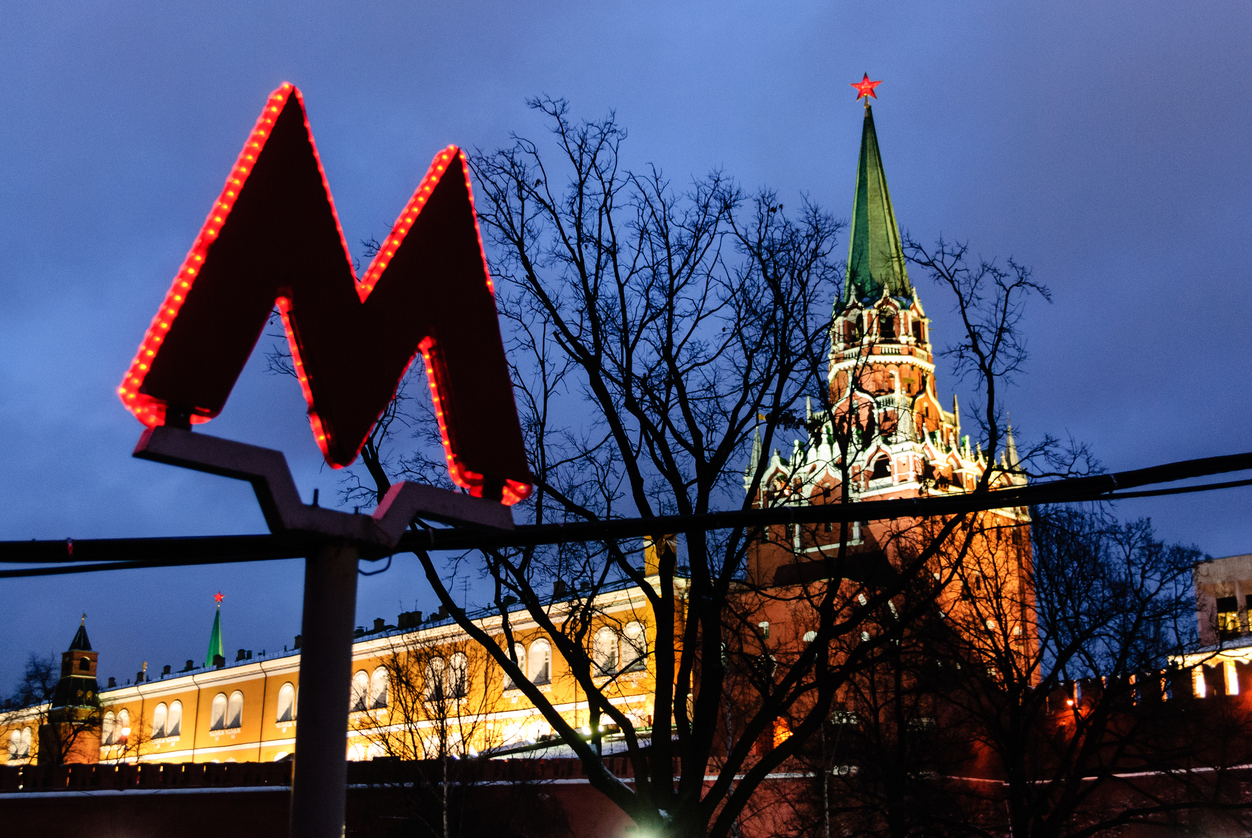 According to the authors, Moscow's basic frame, or its perceived core, consists of three elements: the Kremlin as the central landmark, the Moscow Ring Road encircling the city, and the Metro.

The Kremlin has a sacred meaning and plays a key role in shaping Moscow's identity. However, people tend to refer to the Kremlin in their everyday lives as a reference point for measuring distance ("how far something is from the Kremlin") rather than a historical monument.

The Moscow Ring Road, or MKAD, marks the city's boundaries. Just like in ancient myths, it draws a line between two worlds, and the recently added New Moscow districts beyond MKAD are still perceived by many as alien and poorly integrated into the city's fabric (seeMoscow's New Districts Should Not Be 'Sleeper Neighbourhoods';How Urban District Identity Is Formed;Cities Need Multidimensional Development). Unlike the Metro, the Ring Road does not inspire warm sentiments in most Muscovites.

The subway does not only provide a framework for Moscow, but also "adds content and meaning to the city's internal areas." It would seem that merely serving as a means of transport, the Metro should not arouse much emotion in locals and tourists. However, it really does. Indeed, the Metro could be compared to a corset shaping the city and making it more attractive. 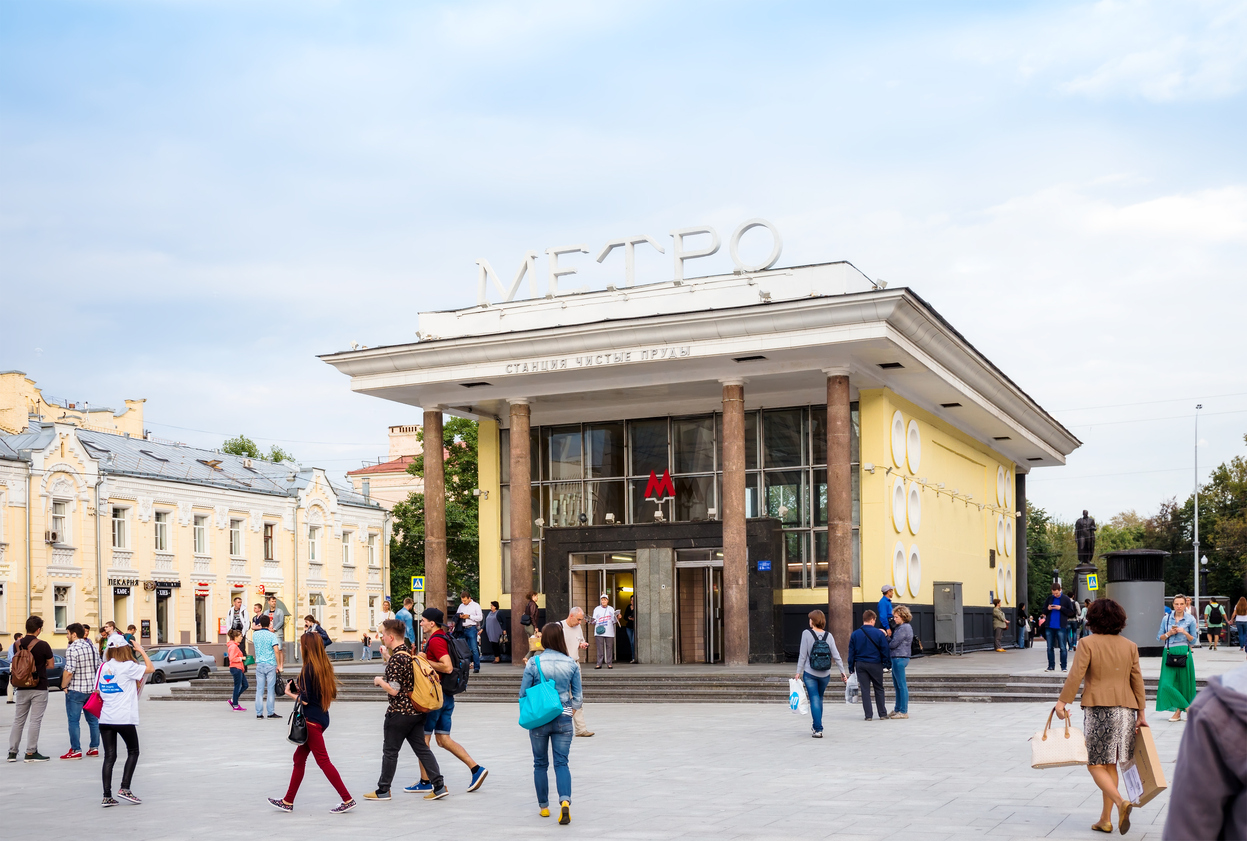 The Metro keeps the old metropolitan toponymy alive, preserving the memory of locations which few people know about today. In addition to this, the subway connects Moscow virtually to other places. "One in six names of Moscow Metro stations indicates a direction towards other cities and countries <...> thus mapping the space and indicating connections between the Kremlin and the rest of the world."

The authors' analysis of station names (a total of 206) reveals that 63% have historical roots, such as reference to settlements, churches and other sites dating back to the pre-Soviet period but not necessarily located in Moscow, and 41 % bear local names, e.g. referring to surrounding landscapes.

The Sokolniki and Lyublino-Dmitrov lines have the highest rates of local names, but for different reasons.

The former is the oldest Moscow Metro line subjected to heavy renaming of stations previously bearing the names of Communist leaders as part of the de-Sovietisation campaign in the 1990s; of the seven stations thus renamed, six were given the historical names of respective local neighbourhoods: Marx Prospect to Okhotny Ryad; Kirovskaya to Chistye Prudy (Clean Ponds); and Dzerzhinskaya to Lubyanka.

The Lyublino-Dmitrov line is the newest one, opened after the collapse of the USSR.

A least 28 Moscow Metro stations were renamed as part of the de-Sovietisation programme, of which 19 were given their 'historical' names.

A few stations are named after villages which used to exist in the place of today's Moscow. Names such as Sviblovo, Medvedkovo, Alekseevskaya, Vladykino, Bibirevo and Altufevo bear the names of 19th-century settlements and homesteads. "Former homesteads, villages and churches have been replaced by new landmarks such as Metro and railway stations named after them," Glazkov explains.

In the Soviet period, some of the old toponyms, such as Cheryomushki, Tekstilschiki and others, were reused and romanticised and subsequently gave names to respective Metro stations. Former unkempt villages outside Moscow with their rickety houses, garbage dumps, vegetable patches and surrounding marshes were transformed into tree-lined city streets of modern buildings, symbolising an outdated and decayed past being replaced by a new and vibrant life full of creativity, vitality and joy.

Many stations of the Moscow Central Circle connecting this intra-city railway with the Metro also reflect some of the old toponymy. "Certain MCC station names date back almost to the Middle Ages," according to the authors. "This new railway service opened to passengers in September 2016 features a few unique historical names which are not shared by their connecting Metro stations, such as Luzhniki, Shelepikha, Khoroshevo, Streshnevo, Likhobory, Rostokino, Andronovka, Verkhnye Kotly and others. "This is an attempt to reproduce the city’s historical fabric," the authors explain. 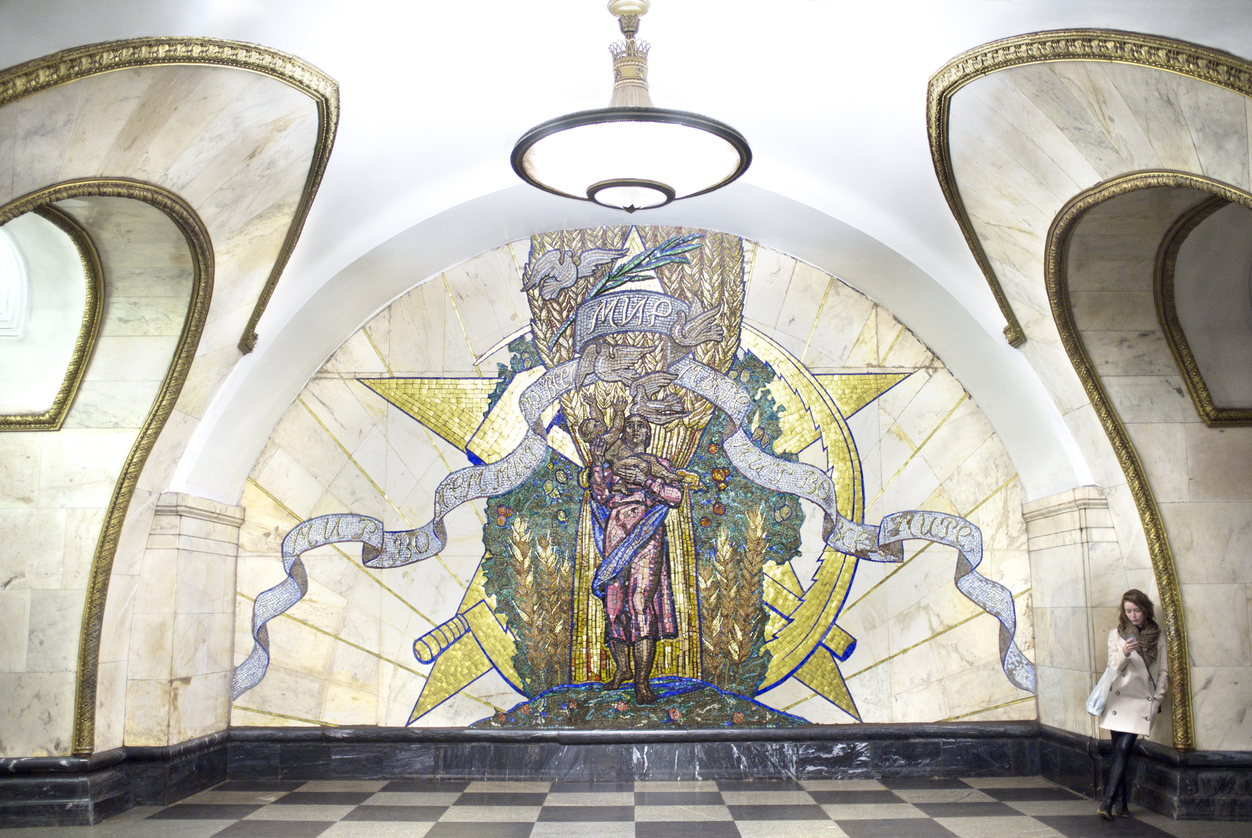 Metro as Museum of Design

Mosaics, stained glass, sculptures and other ornaments decorating the subway are all part of Moscow's historical, cultural and aesthetic identity. Indeed, since its inception, the Moscow Metro has been designed and constructed not only as the city's key transport artery but also as a museum-grade attraction.

Five of its best-known stations are

Ploschad Revolutsii (The Revolution Square) is populated by life-size bronze sculptures of soldiers, sailors, students, miners and other people of the 'new world' symbolising popular support for the Soviet government.

Kropotkinskaya is one of stateliest, most uplifting examples of Moscow Metro architecture, featuring columns illuminated at the top and reminiscent of Ancient Egypt. The station's design won the Grand Prix awards at the international exhibitions in Paris (1937) and Brussels (1958).

Mayakovskaya, with its flying arches and mosaics was awarded the Grand Prix at the World Exhibition in New York in 1939.

Novoslobodskaya with its stained glass decorated pillars has been described as an 'underground fairy tale' and features characters such as an engineer, artist, musician and other creative professionals.

Komsomolskaya, one of the most lavishly decorated and pompous Metro stations, is an example of the so-called Stalin Empire style.

Moscow Metro stations were designed and decorated by outstanding architects and artists, including Alexei Shchusev, Dmitry Chechulin and Alexei Dushkin.

But according to Metro architect Ammosov, "today, the subway's aesthetically rich interior decoration is of secondary importance." In 1955, the Communist Party Central Committee issued a decree calling for "elimination of excesses in design and construction," which ended the Stalin Empire era in the country's architecture. Reliance on functionality replaced the former emphasis on decoration. Ammosov refers to Vladimir Paperny, culture expert and author of the famous Culture Two book, adding that "[after 1955], movement and change came to the fore in building the Metro, while static aspects such as interior decoration receded to the background."

In an interview, Paperny himself offers an example of this change of focus, "Metro entrances built in Stalin and Khrushchev's eras are revealing examples of two distinct cultures. While Stalin-era entrances look like monumental arches decorated with statues of human guards or angels as a symbolic warning that any act of border-crossing can be dangerous, Khrushchev-era entrances are inconspicuous and look exactly like mere underground passages."

Today's public "expects the Metro to provide good-quality rolling stock and tracks, durable structures, and comfort and security for diverse categories of passengers," Ammosov notes. However, contractors are often "under pressure to minimise costs and speed up the process."  Similarly to European countries such as Germany and the U.K., new Metro lines are raised to the surface to make their construction less expensive. As for interior decoration, 'less design' is the prevailing principle, Ammosov concludes. This means that the station's ergonomics and engineering design take primary importance.

Nonetheless, efforts to use the subway for a cultural mission continue. Certain trains are designed around themes such as art, with cars displaying reproductions of famous paintings, World War II history, Soviet film, education such as the Reading Moscow train where passengers can download e-books for free, nature and environment, and others. 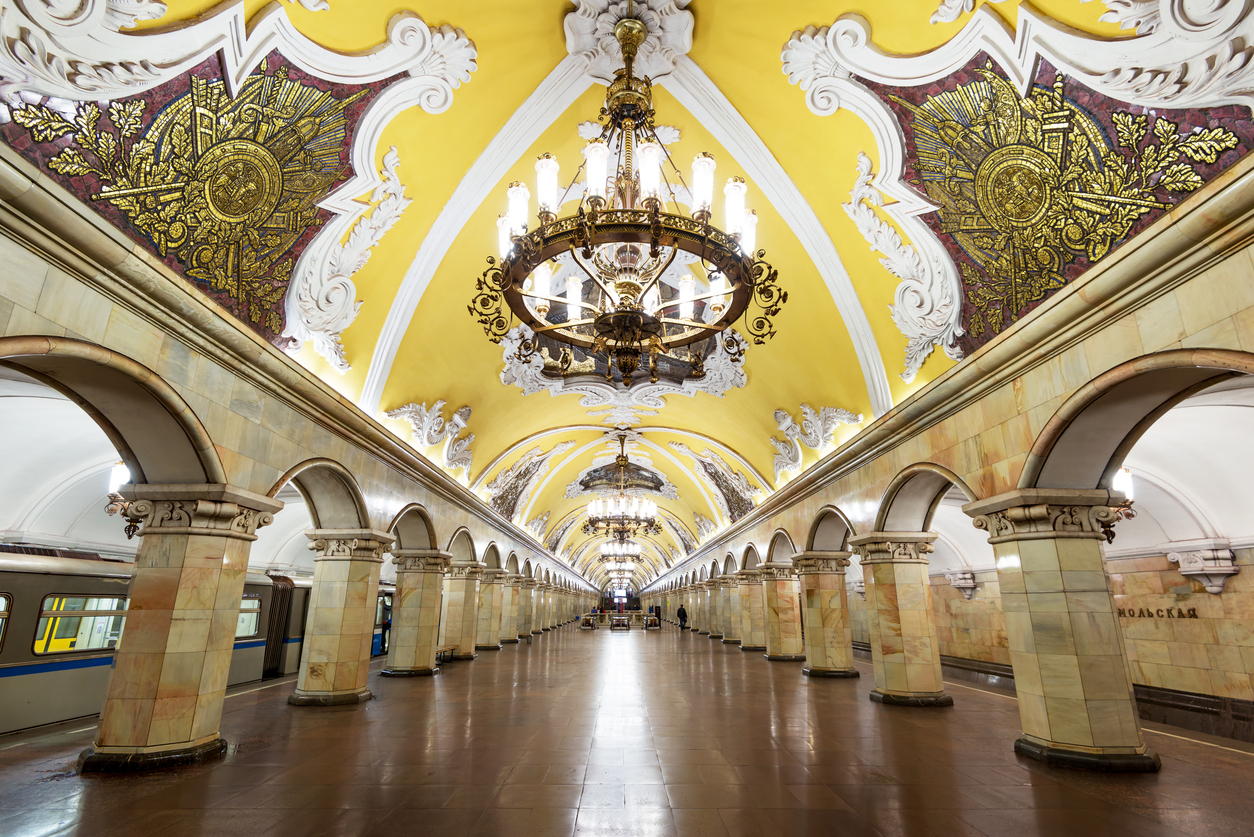 The transport system has also been used as a symbol of state power imposing order and structure upon the city. The Metro was one of the Soviet mega-projects which helped tame the city’s chaotic life.

It brought the previously disparate and fragmented parts of the city into a streamlined whole under a single command.

The sense of orderliness is partly due to the fact that "the Metro seems to contract space by shortening travel time."

At the time when first Metro stations were built, Moscow life above and below the ground was vastly different; indeed, these were two separate cities having little in common.

"The actual Moscow with its dark backstreets and dilapidated wooden houses, broken pavements and littered streets, stood in glaring contrast to the underground city clad in marble with its sparkling lights and mirror-polished floors (from the Soviet Empire: Metro documentary aired in 2009 by Russia 1 TV Channel). By offering a glimpse into a bright future, the Metro's lavish interiors helped sugarcoat people's view on the present.

Despite their imperial glamour, in the 1990s, these underground palaces allowed poverty and chaos to flow in. Traders selling stuff ranging from second-hand utensils to illegally harvested lilies of the valley swarmed the Metro’s connecting passages, pavilions and cars.

Security is another persistent myth generated by the 'imperial' subway, dating back to the war times when deep-lying stations served as bomb shelters. This myth has found its way into contemporary culture: in Dmitry Glukhovsky's bestselling Metro 2033 novel, people try to escape the nuclear aftermath by hiding in the subway. Today, the Moscow Metro is still perceived by many as a better version of the real world – safe, sustainable, orderly and accessible.

Why Objectively and Subjectively Poor Russians Are Different

Happiness, Loans and Loneliness in Russia